The Mentality of Quality Training – The Viking Magazine

The Mentality of Quality Training 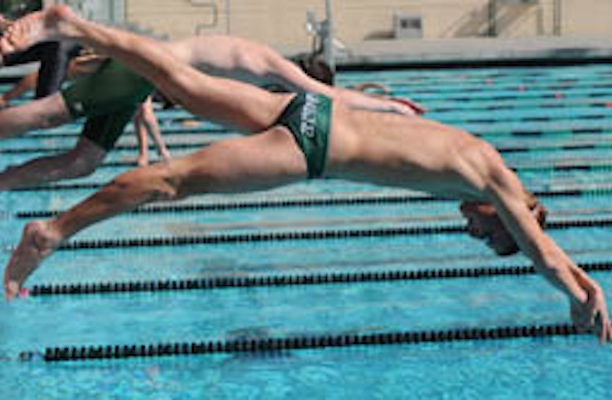 Corso Rosati ('12) dives in to begin the 500 freestyle for the Vikings in a meet against Monta Vista. Rosati placed first in the event, and the Vikings won the meet 134-48.

There is no textbook for training nor specific set of instructions for coaches on how to condition their athletes for top performance.  Coaches usually divide up their athletes into long and short distance competitors and create quality or quantity based training programs depending on the athlete’s purpose.  In many coaches’ minds, quality training means high intensity on shorter, race-like distances to prepare the body for competition, and quantity training means high yardage or miles to get athletes in shape. In reality, quality training is for short distance and long distance athletes alike.  The high school season is too short for debate between the two methods, it is simply all about working hard the whole time.

High school track and swimming seasons have, on average, about fifteen weeks to train and prepare so that the athletes can peak at the end of the season.  With this short season, quality training takes on a much bigger role.   Quality training is much more than high intensity on shorter distances, it is a worth ethic. It is putting in one hundred percent in everything and constantly working hard to stimulate an athlete’s muscles and prepare them for top performance.

The misconception of quantity comes up with one of the fundamentals for quality training: building a base. Regardless of being a long or short distance athlete, a firm foundation is needed to prepare the body for vigorous, high intensity training.

At the beginning of the season, sprinters and distance athletes alike, put in the quantity yardage and mileage to work on their stamina and build a base for the season.

“For varsity, you actually do more quality based training compared to JV,” track and field sprinter Tremaine Kirkman (’12) said.  “ This is because a lot of people on JV haven’t done track before, and need to get into track shape.  Varsity already has that base.”

Sprinter Miles Anderson (’11) built a foundation during the winter season to prepare for track. He worked with track coach Jason Fung to build muscle in the weight room and get into running shape on the track.
The track team runs farther towards the beginning of the season, and then tapers down to shorter lengths. Longer training runs help strengthen ligaments and tendons in the legs to reduce the risk of injury throughout the rest of the season.

“We got acclimated to running by going slow through normal track workouts, then tapering down to a more refined sprint workout once we built a base,” Kirkman said.

When creating their foundation and stamina for the season, athletes build up their aerobic capacity, the human body’s ability to take oxygen into the blood stream and distribute it to the muscles.  With a higher aerobic capacity, the lungs become more efficient, are able to take more oxygen into the bloodstream with each breath and more capillaries develop on the muscle.  Capillaries allow oxygen to go into the muscles produce energy, and remove wastes like lactate.

After building the initial base, two different types of athlete emerge within track and field and swimming: short distance and long distance.  No matter the yardage, however, the main point is to prepare the body for competition.

“If you are a distance runner, you got to put in the miles,” Fung said.  “Your body has to get acclimated to running the long miles.  An average long distance runner, puts in forty miles plus a week.”

“On off days I’ll run more miles, but on workout days [on the track] you are going for the speed, so you are going fast,” long distance runner Susan Heinselman (’11) said.
In contrast, Fung feels that it is counter productive for the track sprinters to rack up the long distance miles during normal season. Short distance athletes train their muscles extremely hard for a short amount of time to grow accustomed to going all out in a short race.

“You are not putting in the miles you are putting in more speed, short burst work, and endurance work on the track, which may consist of 500 meters down to 300 meters,” Fung said.
For Anderson, endurance sprinting, where he runs longer than his race’s distance but at the same intensity, makes up a large part of his training.

“We usually do interval training.  Say for a one hundred meter race we will train 150 [meters], maybe eight 150s at a certain time to build up our speed and endurance,” Anderson said.
This method allows for the athletes’ bodies to get used to the immediate, high intensity required by short distance races.  The repetition adds the element of stamina distance runners build up for their lengthier races through longer runs.

Paly swim coach Danny Dye trains both his distance and sprinter athletes with high quantity workouts.  He expects them to put in the hard work no matter the distance. Dye’s belief is that all athletes, no matter the distance, have to be able to train hard enough to get the muscles tired and accustomed to lactic acid, so that when they taper, the muscles are stronger and more fresh.  This will ultimately lead to the swimmer’s peak performance.

“In a high school season where you are swimming [hard] along the way, you have to push through even when the body is hurting, the muscles filled with toxins and all the stuff that happens when you are training hard,” Dye said. [It’s] part of the process of the body learning how to swim tired.”

Many Paly swimmers swim with coach Tony Batis at Palo Alto Stanford Aquatics (PASA) during the off season.  Batis builds up his swimmers’ endurance throughout the year, and runs a much more quality based program for the swimmers who choose to train with him instead of their respective high schools during the spring.  Unlike high school, he does not have to put in high intensity work while building the base simultaneously.  Batis keeps workouts focused on high intensity and moderate volume around 5,000 and 6000 yards.

“There is no slow anything, you go as fast as you can,” Batis said.  “We mix in short kicking, short speed assessment with fins,” Batis said. They are always doing something in a continuous motion that makes them work as hard as they can for the time frame they are in the water.  Once we get in we get right at it.”

Dye trains the sprinters and the long distance swimmers at the same yardage, but in smaller sets, such as 10 reps of two laps instead of one rep of  twenty laps.  Dye’s method represents that quality does not mean working strictly on sprint sets in practice, but having a focus that simulates to a racing situation and giving it 100%.  The quantity of swimming allows Dye’s swimmers to be in top physical shape for racing.  In such a short season he has his swimmers build a base and work on race mentality at the same time.

Swimmer Paige Devine (’11) is involved with both Dye’s and Batis’s programs.

“In club the coach [Batis] has more time to space everything out,” Devine said.  “In high school season there is less time so you simultaneously have to put in the yardage and the intense race-like effort to be ready for the meet at the end of the year.”

But everything that goes up must come down.  Whether an athlete is focused on long distance or short distance, at the end of the season athletes shorten their yardage and focus on mechanics and fine tuning for races.   When training, muscles break down, and tapering, when coaches decrease the amount of yardage before competition, allows them to develop and refresh.

A high school season is a fifteen week season.  The key for athletes and coaches is to determine what works best in this time to optimize an athletes’ individual performance based on their goals on the track or in the pool.  In this short, creating a system of building a base then putting in hard work and going 100% when training will create a top athlete.  Activity does not equal productivity. As long as someone is working hard, putting in their best, they will perform to the best of their ability at the end of the season.  Quality training does not mean short distance, it means working hard.  Creating race situations, whether the distance be long or short. 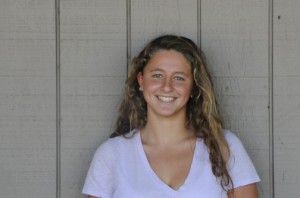 Skylar is a junior at Paly.  She is a member of the varsity girls' water polo and swim teams.  She joined The Viking staff second semester of her sophomore...

The Mentality of Quality Training