Shaving In Sports – The Viking Magazine 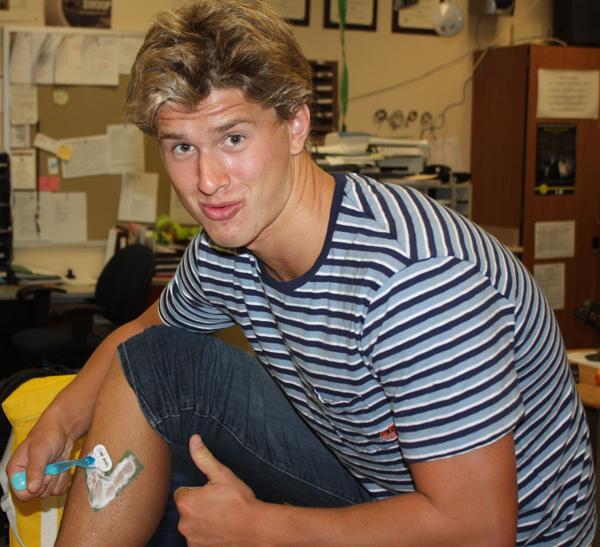 To shave or not to shave? That is the real question. The physics behind shaving suggest that the drag is decreased. Can shaving really increase the speed of a swimmer? Athletes are concerned with improving their game anyway they can. With all the training, could shaving really be the secret for success?

In a sport where as little as one tenth of a second can be the difference between first and second place, most swimmers would rather avoid the risk of a frustrating loss because of their hairy legs.All swimmers approach a competition with their personal strengths and weaknesses. Some may shave because they feel like that means they have an advantage, while others shave to boost their confidence in preparation for facing their opponents.

“Do what the pros do,” former swimmer Scotty McComas (‘12) said regarding the shaving dilemma.

“Shaving is more of a mental thing,” varsity water polo player Shannon Scheel (‘12) said. “It does help but it’s more like I’m getting into the mindset of racing. It does help a small amount but it’s pretty minimal than actually going out and trying your hardest.”

However, the issue of hair removal appears to be a bigger nuisance to the male athletes than females. Girls, who are already used to shaving as a normal routine, are not as shocked or disturbed as are the boys.

“I enjoy the feeling of not having hair on my legs, but the act of shaving my legs makes me feel less manly,” Paly varsity swimmer Quinn Rockwell (‘13) said.

Members of the Paly boys’ varsity water polo and swim team share many different opinions and preferences towards the possibilities of hair removal.Varsity swimmer Corso Rosati (‘12) believes that shaving is an additional factor to prepare for upcoming races. The varsity team holds annual shaving parties before Central Coast Section (CCS) in which all the swimmers come together for their pregame ritual.

As far as the effects of the pre-race rituals go, Rosati feels they are the final steps to prepare for a race after workouts and tapering.

“You feel like it’s the last step of your taper – it just feels good,” Rosati said.

Then again, there is always someone on the team who marches to his own drum, choosing to compete hairy legs and all. Varsity swimmer Youngkuk Lee (‘12) describes his previous experience with shaving and how he feels about it now.

“Shaving takes up too much time, too much effort, and it’s just a hassle,” he said. “There is never any pressure to shave because there is really no need to shave. I think it’s definitely a psychological thing because I don’t really see how shaving can drop time.”

“Every year we shave for Leagues or CCS. My first year of shaving was freshman year and I would say it felt great. I’m not gonna lie, it felt like silk on my legs. I felt super aerodynamic but knew it was all psychological. But, there is no reason for me to keep shaving. Why would I?” Lee said.

The scientific reasoning of physics supports shaving as an ideal method for improving times. Anything that causes water resistance slows down the swimmer and hair is no exception.

“I swam a race after I shaved my legs and there was a dramatic difference,” Rockwell said. “I dropped a lot of time.”

Since the swimmer’s main goal is to increase their speed in the water, the need for smoother skin makes shaving appear a more appealing option than not.

“It improves aerodynamic effects,” McComas said. “That theory holds up.”

However, there are other alternative options for those who are uncomfortable with the idea of shaving. Swimmers have noted that the LZR Racer aids their times, and it may in fact be the fastest body suit for swimmers. Unfortunately, it is suggested that one should still shave for the swimmer to reach his/her full potential. It can still serve as a useful tactic to improve speed though.

So, if it is not for the physical advantage, why do swimmers prefer to shave before a race? Some swimmers whip out the razors and shaving cream for faster times, while others admit to shaving because of the mental aspect of it.

“I think it is a good way to mentally and physically prepare yourself for a race when you are trying to get that time you want,” Rockwell said.

For swimmers who have little body hair, the question is whether it is worth the time and the trouble. Is it even worth that tedious hundredth of a second difference?

“For me, I think it is more physical,” Rockwell said. “But, for some people who barely have any hair on their legs it’s all psychological.”

Others, however, have come see this burden in a more optimistic light, as something swimmers must learn to ultimately embrace as a part of a swimmer’s pride.

“It’s also is bragging rights,” junior Brent Schroder said. “I did not shave my legs and I got a better time than you.”

The question of whether shaving is the key to a swimmer’s speedy success will continue to be a mystery. Only time will tell if smooth legs are the real secret to a swimmer’s victory.    <<<