Finding the Zone – The Viking Magazine 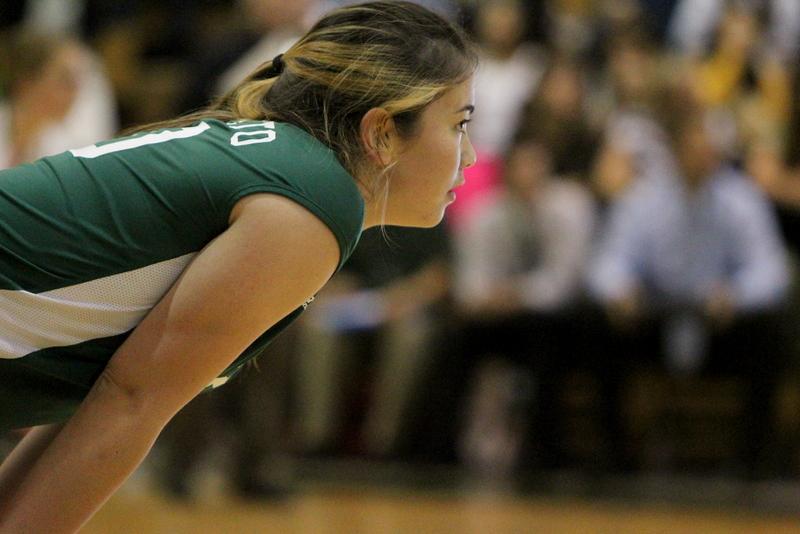 who is this waits for action at the 2011 CIF Division I volleyball state championship. The Lady Vikes pulled through with a last-minute comeback after losing the third and fourth sets. Photo by Paige Borsos.

What is it about that magical state of flow, more commonly known as ‘the zone’, that makes it so attractive to athletes?

Remember when we all wanted to feel like Superman or Mr. Incredible and have the world dance to every twitch of our fingertips? I can’t speak for everyone, but from my fifteen years of experience, I can’t fly, shoot webs from my hand, or take out a gigantic metal monster. Though, I’ve felt Superwoman a couple of times before, notably when I landed a cartwheel on the beam ten times in a row and when I

found myself able to do my first twisting dive off the springboard consistently.

For many athletes at the high school and elite levels, having the perfect practice or perfect game is a rare experience, and often it coincides with being in the much-desired ‘zone’ of peak performance. This ideal state of activity, in which an athlete feels entirely immersed in the present moment, incredibly strong and fast, and absolutely calm yet in command, hangs like the forbidden fruit – once you’ve tasted it, you want more. Athletes strive to gain complete access to the ‘zone,’ what feels like a special, time-warping and superpower-inducing state.

“Being in the zone or having flow is something that athletes want to try and obtain, and that usually happens when they have a great performance,” mental skills coach and sports psychologist Sara Robinson said. “When athletes talk about how they don’t need to focus too much, things just happen naturally; often when they’re in the ‘zone’, the physical performance is very high, and they’re performing to the best of their abilities.”

Too commonly discounted as a mere result of an athlete’s twisted imagination, the ‘zone’ is on the contrary a heavily studied and proven psychological and physiological state. When an athlete says they jumped higher or ran faster, they might not be lying. Whether or not the pool shortens or the basketball hoop mysteriously expands is another question.

Former professional tennis player and sports psychologist Bill Cole notes the nine key properties of being in the zone, among them having a virtual bubble to aid the athlete in focusing, experiencing finely tuned co-ordination, and living in a “self-reinforcing reality.”
“[The zone] becomes valuable in and of itself,” Cole said. “When someone’s in it, they know it, and they enjoy it.”

As a 15 year-old, he experienced the zone in a county championship tennis match against a formidable opponent. Cole won, but more noteworthy was that his first set was a golden set (he won 24 straight points to secure a 6-0 win in the first set). And surely enough, he wasn’t quite sure how everything happened.

“It felt magical, rather paradoxical, in that the zone is a very odd place,” he said. “I had a lot of power, but didn’t feel like I had to put any energy, I was controlling everything with racquet and ball.”

Paradoxes galore might just be why it’s so hard to get into the state of flow. With every ‘zone’ comes an even more beguiling ‘anti-zone,’ in which athletes feel stuck or pulled into the downward spiral of frustration.

“There’s always those days when you’re off and can’t do anything,” diver and former competitive gymnast Serena Yee said. “When you’re really frustrated, you basically fail at everything and it’s just hard.”

That’s probably an athlete’s main inhibitor to peak performance, according to Robinson. Without focus, confidence and emotional control, the athlete can’t get to the place they need to be to enter a higher state, though his/her physical capabilities can still secure a solid finish or win.

But, that brings into question the significance of the athlete’s perception of his/her performance. Some argue that being in the ‘zone’ is a pure mental experience, while other research shows that it’s an actual phenomenon. Our insecurity even about the existence of such a state just shows how elusive a concept it is.

“Athletes can have those great performances even when they’re not in the zone, even though it might feel somewhat different,” she said. “Why the zone is somewhat different is because [the athlete has] the sense that everything is happening automatically and there’s not thought given – everything just flows.”

Even peskier is the question of how to get into the ‘zone’. Robinson thinks it’s necessary for athletes to figure out how they were thinking or feeling before those moments. Yee contends it might be competition.

“In practice you make your own mistake but it’s no big deal, and you can make it up later,” she said. “But, in competition it’s like you have one chance. When you do a back tuck on the beam, it’s like your life is on the line, and that can push someone into the zone too.”

Both Cole and Robinson act as mental skills coaches by providing sports psychology for their athletes to solidify their mental capabilities, which, in turn, might propel them into superman state. Competition can make shaky nerves override trained habits, but such is the purpose of mental training, to be able to get over the insecurities and possible complications of the past and the future, and solely focus on the present. With this extra burst of confidence and control, athletes can have incredible consistency and power, all while just living it up and not worrying about injury, winning, or insecurities.

“It just comes to you,” Yee said. “With determination, concentration, and commitment, all of that combined really sets your mind on the goal you want to achieve, and there are some days when you can just focus on that.”

Other people, such as  musicians, writers, even the idle person sitting at his or her desk can experience this peak performance or flow too.

“The zone is something that is prevalent in every human activity,” Cole said. “Musicians get into it, dancers dancing to the beat get there, people sitting idly tapping their foot are in the zone too.”
However, sports psychiatrist and author Michael Larson proposes that you, instead, go to the zone. His research suggests that the zone is simply a state of thinking in which the “cerebral cortex is bypassed, and your mind is actually operating at a more primitive, reflexive level while being fully engaged.”

Easy to say, yet hard to achieve. Paradox after paradox again stops us from simply turning the key. How can we think our way into a state in which we indeed actively think less?

That’s a question for time and personal experience to answer. Even Robinson says she can only help athletes identify the ideal circumstances for such an experience, and help provide the athlete with the resources to create those circumstances. But in the end, there’s no doubt that athletes strive to get to that magical ‘zone,’ and I, as a frequent idler, am no exception.

“It’s something you have to experience to understand,” Yee said.