Playing by the numbers – The Viking Magazine 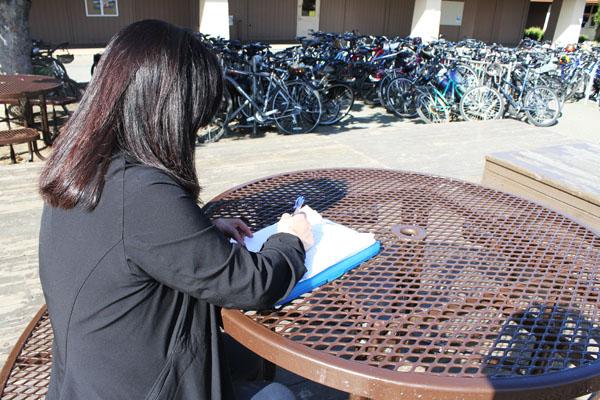 A parent takes down statistics for the varisty girls’ soccer team. The team ranked fourth in the league.

Alex Smith was drafted by the San Francisco 49ers as the first overall pick in the 2005 NFL (National Football League) draft. According to reporter James Alder of the New York Times, Smith was “a mobile quarterback with good quickness, agility, and awareness.” He possessed “a tremendous work ethic on the field as well as in the film room, and he displays good leadership qualities.” However, after throwing 59 interceptions and only posting a completion record of 58% Smith was in danger of getting cut from the team. Instead of getting cut, the managers of the team forced him to take a pay cut. Due to his poor statistics, over the final two seasons of his contract, Smith only made $8 million of the $24.6 million he was promised in his rookie contract.

Many sports incorporate player statistics into their practices, some but players and coaches view the benefits of taking down statistics differently. Both agree that there is a clear difference between quantitative and qualitative athletic performance.

Nesbitt points out that it is crucial to take down stats because they highlight areas of improvement as well as aspects of the game the team failed to excel at.

Volleyball head coach Dave Winn agrees with this, but also believes that stats help him differentiate one player’s skill from another’s of the same position.

“Statistics help coaches see what their eyes cannot,” Winn said. “Without stats, how would I know the difference between a .300 hitter and a .225 hitter? One is First Team All League material and the other might be a good backup player.”

Varsity basketball player Emilee Osageide (‘12) views statistics in different light. She agrees with Winn that stats are beneficial to help point out basic aspects of the game that are not initially seen, but Osagiede also believes there are still aspects of playing that statistics miss.

“There aren’t stats for things like hustle plays and unseen things,” Osagiede said. “However, they do help a person know what they are doing well at, or what they need to improve on.”

Osagiede also thinks that stats draw attention to the player over the team, and believes that they are not always a precise measure of a player’s ability.

“Stats aren’t always completely accurate when it comes to judging a player,” Osagiede said. “You could be a player who lacks good stats, but plays point guard, breaks presses, hustles, and plays defense.”

“[Stats] are a good measure of how you’re doing on the field and what you’re able to accomplish,” Prati said. “If you’re [putting] up big stats, it’s reflected in how well you’re playing. Also, it’s a way we can have fun competition with each other.”

Like Prati, Winn encourages his players to do the same and incorporates competition in practices to help motivate the team. He finds this helpful, not only for himself to see improvement and ability, but as a chance for players to earn starting positions on the court.

“It helps to keep decisions more objective,” Winn said. “If a player knows how they are being measured, and they want to do better, they will at least know what skills to focus on the most.”

Nesbitt says she has seen players get too concerned with statistics and unlike Winn, does not always see statistics as an objective measure.

“Despite their basic intention as an objective athletic measure, statistics are inherently subjective, which will always lead to debate and criticism,” Nesbitt said.

For a sport like swimming, where stats count, athletes have a much different view of what they mean. Swimmer Maddie Berger (‘12) explains that in order to qualify for meets, a swimmer needs to have a higher rank, and as the rank gets higher, the team gets more and more points. Berger also points out that colleges look mainly at the higher ranks when recruiting.

“[The recruiting process] is all based on stats because that’s what [colleges] see online,” Berger said. “All the times [are] listed [there] and and that’s probably what they look at the most.”

Berger explains that without stats it would be extremely difficult to see who came in first or second because it all depends on when the swimmer touches the wall.

“It [is] kind of confusing because sometimes times differ by .01 of a second,” Berger said. “And that can be the difference between going into nationals or not, so it is a pretty big deal.”

Though improvement in swimming is almost always based on stats, Nesbitt agrees with most players that statistics will never show ability or improvement completely, not just because there are more aspects to playing, but also because stats are too dependent on interpretation. She sees statistics as just one of many measures of athletic capacity.

“Stats are one quantitative evaluation of athletic performance,” Nesbitt said. “It is true that stats never tell the whole story, but they are not designed to do that.”

Despite the negative aspects of basing improvement on statistics, Winn believes that it boils down to whether or not players know if they are augmenting in the areas they strive to improve in. He considers statistics as the best way to show and measure this in an objective manner.

“Stats definitely help track performance and improvement,” Winn said. “We cannot improve what we do not measure.”

Just like many players, Osagiede does not feel statistics are necessary for her self-improvement, or even her team’s improvement in play.

“Stats may be interesting to look at, but they don’t help me much in the end,” Osagiede said. “My goal is to help the team however I need to and that can mean a number of different things. I don’t care about the stats, they are basically useless to me. I know what I need to do and at the end of the game I judge how well I played based off of how hard I played and the outcome of the game.”