Pinning at all costs – The Viking Magazine
MENU 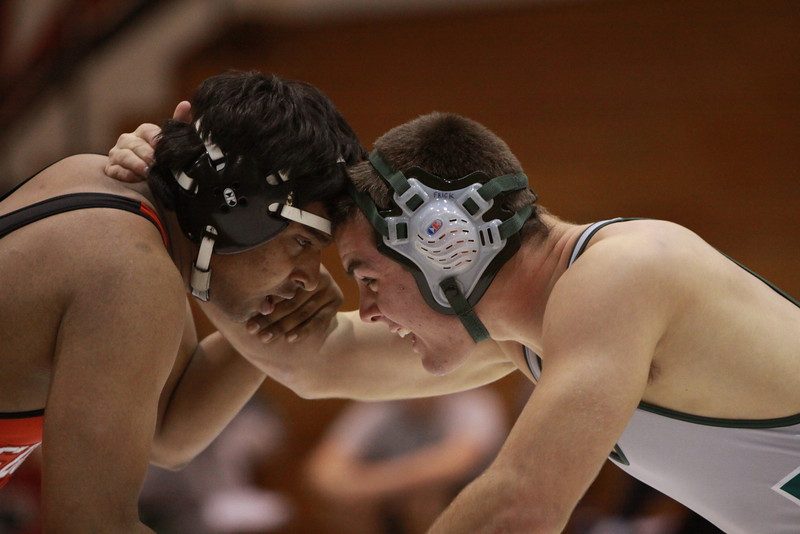 The sculpture of The Two Wrestlers standing in the Uffizi Collection in Florence, Italy depicts just one moment in the timeless sport of wrestling. The two muscular men have remained forever frozen amidst their battle to top one another for over five thousand years. During the winter months, this scene of two struggling wrestlers comes alive each day in the Palo Alto High School gym.

Last year, more than a quarter of a million boys and eight thousand girls participated in the sixth most popular boys’ sport in high school. These athletes work endless hours improving their form, strength and endurance to prepare for a few intense minutes of competition.

Despite the huge number of competitors participating in wrestling around the country, the sport receives relatively little recognition in the media and in public. This lack of appreciation for wrestling could possibly be due to the fact that the sport is often not very well understood, and the Paly community is no exception.

“Wrestling is misunderstood by a lot of people because they think that it’s just rolling around in tights on a mat,” varsity football and wrestling captain Erik Anderson (‘13) said. “But it’s the opposite of that.  People don’t realize how hard it is. There’s no sport harder than wrestling.”

Many Paly students, misinformed about the wrestling culture, underestimate the sport’s challenges. While Anderson has been a devoted wrestler for the past 12 years, teammate Andrew Frick (‘14) originally knew nothing about about wrestling when he first set foot on campus.

“In the beginning of freshman year, I heard around that wrestling was the hardest sport at Paly,” Frick said. “I didn’t know if that was true.”

Now in his third season after having qualified for the 2012 State Tournament, Frick is confident that wrestling is the most mentally and physically tough sport offered at Paly.

“A wrestling match is like trying to flex every muscle in your body as hard as you can for six minutes straight,” Frick said. “To try and train for that, the coaches try to push you as hard as you can possibly go and then when you’re super tired and you want to give up, then they push you even harder. [Preparing] for that six minutes of just complete, 100 percent full effort, that’s why [wrestling] is harder than anything else.”

Each scholastic wrestling match is comprised of three two-minute periods; each period starts off with the two wrestlers in either the neutral or referee’s position.   In the neutral position both wrestlers stand facing each other about three feet apart, whereas in the referee’s position one wrestler is perched down on all fours, while the other wrestler is positioned on top of his opponent, kneeling on his nearside.  The top wrestler, who has the advantage,  also places his far-side arm around his opponent’s waist with the hand of the other arm on the elbow of his opponent and his far-side leg of the top man is placed behind the bottom wrestler.

To prepare for this six minute battle, an intensive training regimen is crucial.

Workouts range from hill sprints to exhausting drills with teammates. Although wrestling at Paly is a winter sport, preseason conditioning begins in the fall for the wrestlers, making it almost a two-season sport. Wrestling conditioning includes various types of weight lifting to build muscle along with long runs in the hot sun (or heavy sweats if it is cold outside) to cut weight.

Not only are the wrestlers constantly working out, but they are also under pressure to lose or maintain their weight for every competition in order to stay in their weight class. Paly wrestler Gary Hobach (‘13) recently had to put in extra hours of training in order to lose weight for the Santa Clara Valley Athletic League (SCVAL) championships, in which he won first place in the 152-pound weight class.

“I’m cutting a lot of weight for leagues right now,” wrestler Hobach said. “I’m cutting probably over 10 pounds. It’s pretty tough because you are already at a lean weight from working out, so losing weight is pretty hard.”

The Central Coast Section (CCS) has 14 weight classes for wrestlers, ranging from 106 to 285 pounds. The different weight classes provide an opportunity for athletes who may be limited by their size in another sport, such as football, to be able to reap the rewards of countless hours of training.

“You can be a real tiny guy or girl or a real big guy or girl because there are so many [weight] classes,” Paly head coach David Duran said. “The kid that works very hard can be successful.”

Once the whistle blows, competitors in the same weight class strive to try to pin their opponent,  and therefore end the match. A pin, or fall, occurs when one wrestler holds another wrestler on his or her back with his or her shoulder blades pinned to the mat for at least two seconds. However, more often than not, wrestlers make moves like takedowns, reversals, escapes and near falls on their opponents in order to gain the points that will ultimately lead them to victory.

Unlike in other contact sports at the high school level, these combative moves are executed with the intention of foisting pain upon the opponent.

Jim Anderson, father of Miles (‘11) and Erik and a former wrestler himself,  finds that the aggressive nature of wrestling separates it from other high school sports.

As a safety precaution, there are penalty points, where additional points can be awarded to the opponent of the wrestler in violation of certain rules and conduct.

Although wrestlers compete individually, each match contributes to an overall team score, invoking a sense of responsibility among teammates.

“It has the team element and the individual element,” Frick said. “But on the weekends at the tournaments it’s interesting because you get all the credit when you win but then again you get all the blame when you lose. You can’t put the blame on a teammate or take the credit from a teammate. It’s all you. There’s no getting out of it.”

This element of wrestling has often proven to be a challenge, both mentally and physically, in itself especially in comparison to traditional team sports.

“I think one of the hardest things about wrestling is just to actually step foot on the mat to begin with,” J. Anderson said.  “It is a lot easier to go out on a field when you have all your teammates surrounding you and you know people are watching your back for you. In wrestling you don’t; you’re walking out there by yourself and you’re the only one who can do anything.”

Stepping onto the mat with nothing but a singlet to cover their back creates a profound sense of pressure to perform for both wrestlers.

“There’s a lot of anxiety about everything,” E. Anderson said. “Every time you step on the mat, your ego and everything is at risk.”

Despite years of experience and numerous victories, E. Anderson and the newer Viking wrestlers are all faced with difficult trials during each day of wrestling.

“Going to practice every day [is one of the biggest challenges],” E. Anderson said. “Practices aren’t like any other sport. Football practice you don’t go all out, every day. You don’t have a full contact game every day. It’s one of the hardest sports because you go all out the whole time.”

Frick agrees with his teammate’s belief about the daily wrestling grind.

“Just getting through every practice [is difficult],” he said. “Every practice is a challenge. The coaches try and push us harder every single day. It feels good every day when I’m going home from a tough practice having gotten through it.”

Duran acknowledges the brutality of the practices as well as the sport as a whole.

“Even at the high school level this will probably be the toughest thing the person has ever done in their life,” Duran said.

But why would anybody endure the countless hours of intensity and pain?

“Winning [is the most rewarding part of wrestling],” E. Anderson said. “That’s the only reason to wrestle. That’s the fun part, because you know you beat the guy.”

Not only does winning provide the wrestlers with motivation to work hard, but also teaches wrestlers important values that prove to be helpful later in life.

“When you’re successful in something that is really hard, it builds your confidence and it also lets you [transfer it] to other things in life,” J. Anderson said.  “When you’re facing something that’s a very hard task, you know that you can overcome it and be successful if you continue to work.  The discipline, the hard work that goes into wrestling, and the ability to be mentally strong in order to be successful, are things that really help you for the rest of your life.”

In J. Anderson’s experience the wrestling work ethic is passed not just to other aspects of  his own life, but is also shared from generation to generation.

“Many people I know that have wrestled [do so] because they’ve had family who’ve wrestled,”  J. Anderson said. “For me, my cousin and my brother wrestled so they were always coming home and practicing moves on me so I got introduced to it in the house.”

Last season, a similar family influence was observed with several Paly wrestlers.  Kalen Gans (‘12), a top wrestler for his team, followed his father’s footsteps and wrestled alongside his younger brother, Jordan Gans (‘14).  In addition, Jeff Frick and J. Anderson have inspired their sons, top wrestlers for the Paly program, to carry on their legacy.

These family ties have supported wrestlers through their toughest times.
“[Wrestling has] made me want to quit a lot of times,” A. Frick said. “It’s a rough sport, but I think I’ve gotten a lot more mentally tough.”
Duran finds that wrestling is a model for life’s challenges and believes that wrestling truly shows that success is the product of sweat and hard work.
“‘Work in equals work out’ is the way that success goes,” Duran said.

Somehow, despite the intensity and grueling nature of the sport, athletes continue to be drawn to this form of competition and in turn benefit from the rewards of the hard work it requires. Frick and many others who have only recently begun wrestling serve as an example of how a better understanding of wrestling and its demands helps lead to greater recognition and appreciation of the sport and its ancient legacy. Even after the longest days with countless moves, drills, and battles that could be forever captured in marble, wrestlers are able to pick themselves up after being pinned, and come back to defeat their next opponent.