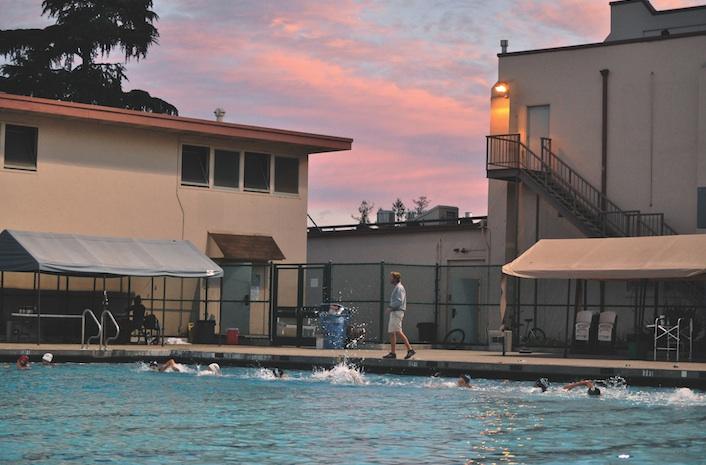 The girls' water polo team swims at their regular season morning practice. They had 5:30 a.m. practices during hell week.

As fall sports at Paly begin their seasons, players grumble about setting early alarms on the weekend, having to be at school twice in one day and running countless laps around the track. This is hell week – the return to school sports from an easy summer. It works to get players into shape so they can take on the new season without facing the possibility of tiring out.

Hell week is unique to the fall sports of football, volleyball and water polo, and typically takes place a week or two before the start of school. Practices, which are often long or early in the morning, focus on strength and conditioning in order to get athletes ready for the long seasons ahead of them.

Previously, these practices fell in the week leading up to the first day of school, allowing multiple, rigorous practices in one day to be less early in the morning and more manageable. However, this year, hell week was forced to be during school due to the fall sport start date of August 16 set by the Central Coast Section (CCS). Though the CCS date has never before served as a problem for fall sports, the early shift in Paly’s schedule last year became an issue with this year’s regulated start date. Because of this, school and sports started at the same time for fall sport athletes. For coaches, this meant that their pre-season schedules had to be shortened.

“This year was quite unique because we did not get to start before the school year started,” girl’s water polo coach Danny Dye said. “I did not do a traditional hell week.”

In years past, all three sports have had intense hell week practices, but with Paly’s new schedule and legal practice starting the day after school did, only water polo continued to run something similar to a “regular” hell week.

The water polo schedule has always been long and demanding of players’ time, even this year with the schedule change.

Volleyball had a similar experience.

“It’s a lot of running, and a lot of pretty much just nonstop around the track and core and bleachers,” varsity volleyball player Claire Krugler (‘16) said.

During their hell week, water polo also tries to build up their stamina by spending the majority of their week focussing on purely swimming without working on skills or ballwork.

“During hell week, the first couple days are just swimming; you don’t even see or touch a ball,” Newman said. “It’s all just much harder. The legwork we do is way more intense; it’s way harder. You’re trying to build muscle; you’re trying to get [back] in shape.”

Getting into shape is what all the sports focused on in their hell week, no matter how long. A high fitness level leads to a beneficial season coming right off of summer. Later is when coaches can work on skills and the game.

“You’re trying to get a strong cardio built, so you’re doing more cardio wise, and you’re hitting them kind of hard so they get a base built about two weeks in, then you can go from that base from there on out,” Dye said.

Throughout the years, water polo’s hell week has long been recognized as a very rigorous set of practices, and now even more so that players were balancing school work and two practices a day, because of the clash between the CCS start date and school start date. Despite coaches having to recognize that school was starting as well as hell week, practices were still long and intense.

“It really impacted how much sleep I got, when I had to go to bed, when I did my homework and all of that,” varsity girls’ water polo player Izzy Kelley (‘17) said. “So, it was [a hard adjustment].”

The balance between getting in the necessary practices and giving the student-athletes enough rest to manage their work was a situation that the coaches faced for the first time  during hell week.

“You hope that you can do the right amount,”     Dye said. “You have to balance it out between how are the kids’ aches and pains, and how is their mental stability, how is their class work load, are they ready to be fried. And so you do the best you can.”

With the shortened schedule teams look optimistic towards their seasons despite irregular preseason training.

“I think our team will be fine,” Givens said. “I think we’re going to be pretty good this year, so I don’t think that [having less practices] will affect us.”

The volleyball team still managed to get in conditioning without a whole week of doubledays, and is already starting their season off strong.

“When we had [hell week] for a week, it was all the activities spread out,” varsity volleyball player Jade Schoenberger (‘15) said. “[This year] was just everything on one day. I think either way you have to be ready [for the work].”

While preseason hell week practices often serve as the first mental test of the season, they are also a very difficult physical test. It shows what the fall sport athletes are capable of and what they can achieve in their upcoming season. Only a week long hell week shows the teams are still ready for the season.

By building up stamina and cardio in the time they have, coaches can then focus on getting players’ skills up. Players recognize the beneficial part of hell week, despite the extensive time and effort needed to put into it. They know that it will help for the season in the long run.

“I think [hell week] is a necessary part of a fall sport,” Newman said. “It may suck during it because it is very painful, but it is the only way to get in shape after a very long summer.” <<<