The 85th Season – The Viking Magazine 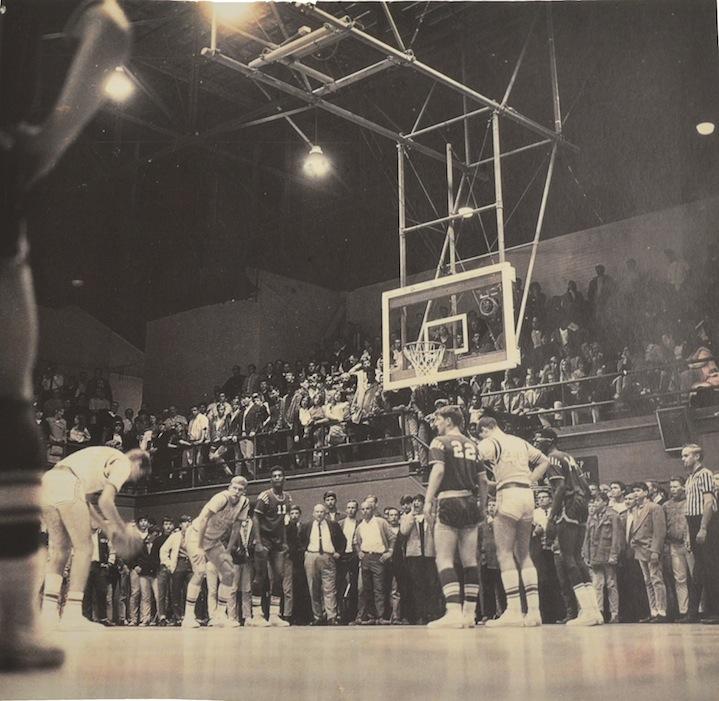 In the 1967 SPAL Championship, Mark Daley ('68) made two free throws in the final minute to win the game 70-68 against the Sequoia Redwoods. That championship game drew the largest crowd to ever occupy the big gym.

Standing in the middle of the big gym, one is surrounded by banners, plaques and awards that date back to the nineteenth century. The numerous green and white wooden plaques may seem irrelevant to the current Paly student, but these numbers and letters represent the thousands of memories that have been created in the iconic gym. The “big gym” was built in 1929 and dedicated in memory of George Stirling Stewart, former vice principal and coach. It has been standing tall for 85 years but will face its end in 2014, construction will begin for a set of new gyms to replace the existing ones because of a private $20 million donation. The construction of the new gymnasiums although extremely beneficial, will tear down thousands of memories that have accumulated throughout hundreds of athletes in the gym’s 85 years of existence.

Many greats have played in this gym including former Boston Celtics’ star Jim Loscutoff (‘48), National Football League coach Jim Harbaugh (‘82) and current Houston Rockets’ guard Jeremy Lin (‘06). In addition to the many Paly basketball stars, athletes from both the volleyball and wrestling teams have been impacted by the green stands that encompass the George Stirling Stewart gym.

“You look at all the plaques and flags around the gym, all those guys are still alive,” athletic director Earl Hansen said. “A lot of good memories fill this gym.”

In 1967, varsity basketball coach Clem Wiser enjoyed one of his best seasons, finshing with a record of 27-2. That year the Vikings’ performance in the South Peninsula Athletic League championship game ranked them second in the entire state, and that game was one that Wiser and his team would never forget.

Playing against the Sequoia Cherokees in the league championship, the score was tied 15 times and never exceeded a three point spread.

“It was nip and tuck the whole way,” coach Wiser said. “Mark Daley (‘68) shot two free throws with 20 seconds left to the win the game 70-68 and gave us the championship.”

The 1967 championship game between Sequoia and Palo Alto was one of the most exciting games Wiser ever experienced. The fans were loud and the gym was packed.

“It was the largest crowd that ever saw a basketball game at Paly,” Wiser said. “Enough people came that [we had to] lock the doors and about 100 people couldn’t get in. We even brought in temporary bleachers and people stood three to four deep all around the court.”

Large crowds like that one contributed to making more memories and history. The display case in the gym’s front hall houses many of these memories with the numerous pictures, plaques and trophies that overflow the window. Wiser started this trophy case with history teacher Florence Turner who was a basketball fanatic. Before the display case, she kept many of the past trophies in her room after collecting them from the throw-out pile.

“Florence Turner was the keeper of the Paly banner and she would put it up on the wall, sit in front of it and protect it,” Wiser said. “When we played Sequoia one of the Sequoia kids came around and tried to take the banner down and steal it. Our varsity football team was in the stands and they grabbed the kid, got him to the railing and tossed him over. He landed on the scoring table and broke it in two. He got up running and took off to the other end of the gym and the football players chased him out [the door].”

Wiser served as the head basketball coach at Paly from 1955 to 1984 and as the Athletic Director from 1984 to 1990. He won the Coach of the Year honors from the California Coaches’ Association in 1982 and was elected into the California Coaches’ Hall of Fame in 1991, Wiser made a huge impact on the Paly basketball program, affecting the lives of hundreds of athletes on the court inside the big gym.

Craig Carpenter (‘60) played under Coach Wiser for three years at Paly and later went on to play for San Jose State University. Playing in gyms all over the country during his collegiate career, Carpenter recalls that Paly had one of the most memorable gyms he had played in.

“The old Paly gym was the most fun place I ever played” Carpenter wrote in an email to The Viking.

In addition to playing in the gym, Carpenter recalled watching some of Paly’s most successful basketball players in the gym during his time in Palo Alto.

Memories define the gym’s character. Every person who has an experience with the gym will carry a different memory with them.

Kent Hinckley (‘61), another one of Wiser’s many players remembers the gym with fond memories.

“Tearing down the old gym is sad given all the memories,” Hickley wrote in an email to The Viking. “When I return to Paly and visit the gym, the memories return in vivid color.”

Similar to Wiser, 39 years later Peter Diepenbrock took part in a similar experience in that gym. Diepenbrock was the basketball coach at Paly for 11 years from 1997 to 2008, leading a team all the way to win the 2006 State Championship.

“Paly versus Woodcreek from Sacramento in the Norcal semifinals, we were tied with a minute left and Jeremy Lin hit a 3 to put us up 3 to win that game and send us to the Norcal finals,” Coach Diepenbrock said.

The game that Diepenbrock recalled was one that he would never forget. The team led by current NBA player Jeremy Lin was one of Paly’s most successful basketball team’s, and that game was one of the most memorable games in recent Paly history.

“The gym was absolutely packed and we had an incredible crowd and we had a very good team, and I think there is no way that we would have won that game if it had been on a neutral court or any other place other than that gym,” Diepenbrock said. “The crowd was packed, sold out.”

Diepenbrock credits much of that win to the state of the gym. With its unique raised bleachers that surround the court and the gym’s natural tendency for an echo, it could get very loud and the crowds could become very electric in big games like that.

Kheaton Scott (‘06) was a member of the Paly Vikes the year they played the Norcal Semifinals in the big gym and the year they advanced to win the state title.

“Our unique gym probably intimidated our opponents,” Scott wrote in an email to The Viking. “The elevated bleachers made it feel like we were playing in a gladiator arena. I have no doubt it was difficult for some teams to play under those conditions.”

In 2013 we look forward, leaving the years of the big gym behind us as we see the construction of two new state of the art gymnasiums on the Paly campus. Despite the charm that the gym holds, it is time for us to embrace the new, modern buildings that will replace the gym that has stood tall for over 80 years.

“It’s a classic style gym from those days,” Hansen said. “It was the best gym between San Francisco and LA when it was built.”

“I am sure students will be excited to have a new gym to play in,” Scott wrote. “I just hope the architect tries to preserve some of the uniqueness of the gym that I remember playing in. If I had to pick one characteristic to keep from the old gym, it would be the elevated stands.”

The basketball teams of  2013-2014 season will be the last teams to play surrounded by the raised green bleachers and will be the last to create the unforgettable memories in the building that has housed so many former Paly athletes. This being the last season in the big gym, the time has come for the Paly community to rejoice in the gym and reflect on the many games years ago, when packed crowds helped the Vikings prevail over their opponents. With next season’s team having no home gym, a challenge will arise for the 2014-2015 season, but with the new homes around the corner there is little need to worry.

“I do understand that progress must go on,” Hickley wrote. “I wish everyone connected with the new gym all the luck for continued success in basketball.”

The replacement of this historic time capsule by a new state of the art gymnasium is both a tragedy and a triumph. The place where years of history was made will no longer stand, but the history it housed will never be forgotten.