A Jump for Women – The Viking Magazine

A Jump for Women 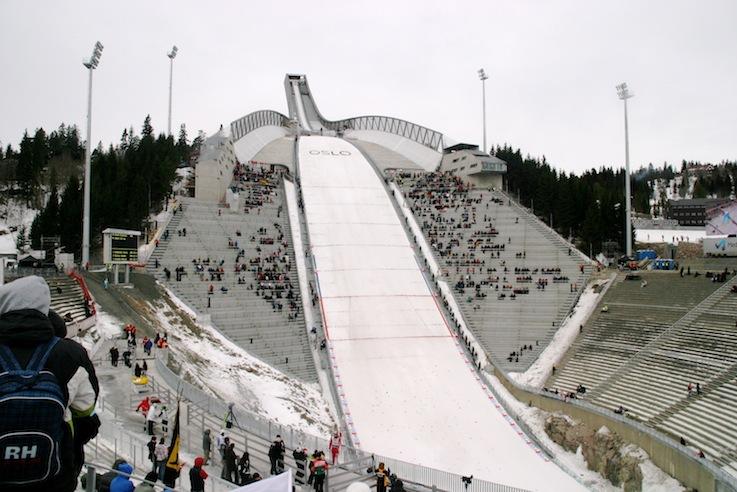 The Holmenkollen ski jump in Oslo, Norway is a K-120 ski jump (the size of a larger hill in the Olympics). The record on the hill for the longest jump is 141 meters.

Racing down a steep decline, gathering speed, jumping and then flying through the air, skis in the shape of a V, back flat, and watching the ground come to meet you. Jumping off of a 400-foot-high ice track is not something that many dare to do, but for those who participate in the sport of ski jumping, this is exactly what they do. Reaching speeds of up to 60 miles-per-hour and flying through the air for lengths as long as one and a half football fields, ski jumpers must have extreme athleticism and dexterity.

Ski jumping originated in Norway in 1809, where the first jumps were only 20 feet. The sport came to America in the early 1900s and gathered more participants, both male and female. men’s ski jumping has always been in the Winter Olympics since it first took place in 1924. It was only in 2011 that the event of women’s ski jumping was added to the Olympic Games.

The sport itself consists of first skiing down a ramp, then jumping off at the very end in order to fly the farthest, and land. There are two hills: the smaller K-90, and the larger K120. The skis used are long and flat.

The 2014 Sochi Olympics will be the first time that women ski jumpers will compete at the games. Women have been excluded from countless international ski jumping competitions in recent years, but segregation in the sport has existed practically since the it was invented. Early in the 20th century, medical reasons were posed for why women should not be allowed to participate.

“Ski-jumping is not good for the female organism,” Gustave Klein-Doppler wrote in the 1926 Wintersports Yearbook. “At this time there is no need or reason to organize jumping competitions for the ladies. Because of this unanswered medical question as to whether ski jumping agrees with the female organism, this would be a very daring experiment and should be strongly advised against.”

This precaution was accepted for many years, and only few women dared to try the sport. In the 1990s, women were first allowed to participate in international competitions with men, though only as pre-jumpers before the real competition. Finally in 1998, a girls only competition was held in Switzerland, though it was not sanctioned by the International Ski Federation (FIS). Also that year, there was a women’s event in the US Ski Jumping Championships. FIS began sanctioning events in 2003.

Women ski jumpers were accepted officially on the international level when in 2009 they were given their own World Cup, and in 2011 they were allowed into the World Championships. Women had ski jumping international events, but they were still missing the coveted Olympics. Pressing the International Olympic Committee (IOC) to allow them participation in the 2006 Torino Olympics, women were refused. The IOC ruled that women ski jumpers were not skilled enough to be allowed on the jumps, there weren’t enough participants, and women’s jumping was not developed enough as a sport.

Women pushed again for participation for the 2010 Vancouver Olympics. A lawsuit was filed against the Vancouver Organizing Committee for the 2010 Olympic and Paralympic Winter Games (VANOC) by 15 female jumpers, including the then-world champion Lindsey Van. In the British Columbia Supreme Court, it was ruled that the IOC had the ability to make the decision, not VANOC. The IOC did not allow women’s ski jumping,and for that year, women ski jumpers were excluded again.

“If you have three medals, with 80 athletes competing on a regular basis internationally, the percentage of medal winners is extremely high,” IOC President Jacques Rogge said in 2008, before the 2010 Vancouver Olympics. “In any other sport you are speaking about hundreds of thousands, if not tens of millions of athletes, at a very high level, competing for one single medal. We do not want the medals to be diluted and watered down.”

Finally, on April 6, 2011, the IOC announced that ski jumping would now be included in the Winter Sochi Olympics.

“When you really look at this, this is a win for equality for women,” vice president of Women’s Ski Jumping USA Vic Method said in a The New York Times article.

Participation in ski jumping had increased since 2008, and so had the distances that women have been jumping. At the FIS World Cup in March 2013, Japaneses ski jumper Sara Takanashi jumped the longest of the women, 134.0 meters; the longest men’s jump was 139.0 meters. Now that women can reach the high level of the Olympics, participation is expected to rise.

“Once the girls know that they’re in the Olympics, more and more want the opportunity to do better,” president of the women’s ski jumping foundation Deedee Corradini said in the New York Times article.

The athletes who will be members of the first US Women’s Ski Jumping Team include Alissa Johnson, Jessica Jerome, Lindsey Van, Abby Hughes and Sarah Hendrickson. Hendrickson is the current world champion, but had a crash landing on August 21, 2012 after a jump in Germany. She did severe damage to her knee, but hopes to recover in time.

There is still more progress to made to reach equality within the sport of ski jumping. Women only have an event on the small hill, while men additionally have a second larger hill to jump, a team event, and the Nordic combined (which involves cross country skiing as well as the ski jump).

“I think in the whole that the women skiers have really fought a battle,” Marlene Bjornsrud, co-founder of Bay Area Women’s Sports Initiative (BAWSI), said. “[They] have had to prove their ability to do this every inch of the way.”

Women’s ski jumping is not the only sport where women have fought for more equality, in fact it is just one example of women being excluding in sports. Gender-based discrimination in sports has existed since 776 B.C.,when women were prohibited from  participating in the first Olympic Games.

In 1924, the first Winter Olympics, figure skating was the only sport open to women. Then, in 1928 women were allowed to participate in track and field events, although they weren’t fully acknowledged in the sport until it boomed in popularity during the 1970s. Similar to ski jumping, cases for women’s health were stated as to why women could not run.

“I think there are some interesting parallels to years and years and years ago when they wouldn’t let women run the marathon,” Bjornsrud said. “And now…there are women running marathons and longer distances all around the world. And there was a sense of fear that physically they weren’t able to do that. In fact, there is a myth that if women ran that much their uterus would fall out.”

In the sport of tennis, Billie Jean King, 29, accepted an offer in 1973 to play Bobby Riggs, 55, a 1939 Wimbledon champion. In a nationally televised event which came to be called ‘Battle of the Sexes’, King won against Riggs on Sept. 20, 1973. Her stunning win proved that women could succeed greatly in sports.

At Paly, a similar break for girls is occurring in wrestling, with girls beginning to join the team. In Volume VIII Issue 3 of The Viking, female wrestler Alexa Austin talks about breaking into the wrestling world.

“Originally a lot of people would think that girls cannot compete with guys and don’t consider it a legitimate sport,” Austin said.  “But I think it’s starting to change.”

With women’s wrestling just being added to the Olympics in 2004, a significant parallel is seen between ski jumping and wrestling. The future for women in both of the sports will involve inclusion and recognition from the whole sports community.

“Women need to support other women,” Bjornsrud said. “Equality cannot come from invisibility. We have to watch the event and call NBC and say ‘Thank you for showing women.’”

As the first women’s female Olympic ski jumpers take the podium, an important moment will be made for women in sports: every sport in the Olympics will now have both a men’s and women’s event. This pivotal change can be an example for how far women have come and can go.

“Every time there’s another step, small or large, in the women’s sports community, that opens up more possibilities,” Bjornsrud said. “Then I think that every little girl gets to think more broadly about what can she do without limit, and so whether small or big—it’s important.”

A Jump for Women