A league of their own – The Viking Magazine

A league of their own

As seniors, some students who do not play basketball for the high school team find an alternative league in which to compete in the form of National Junior Basketball (NJB). 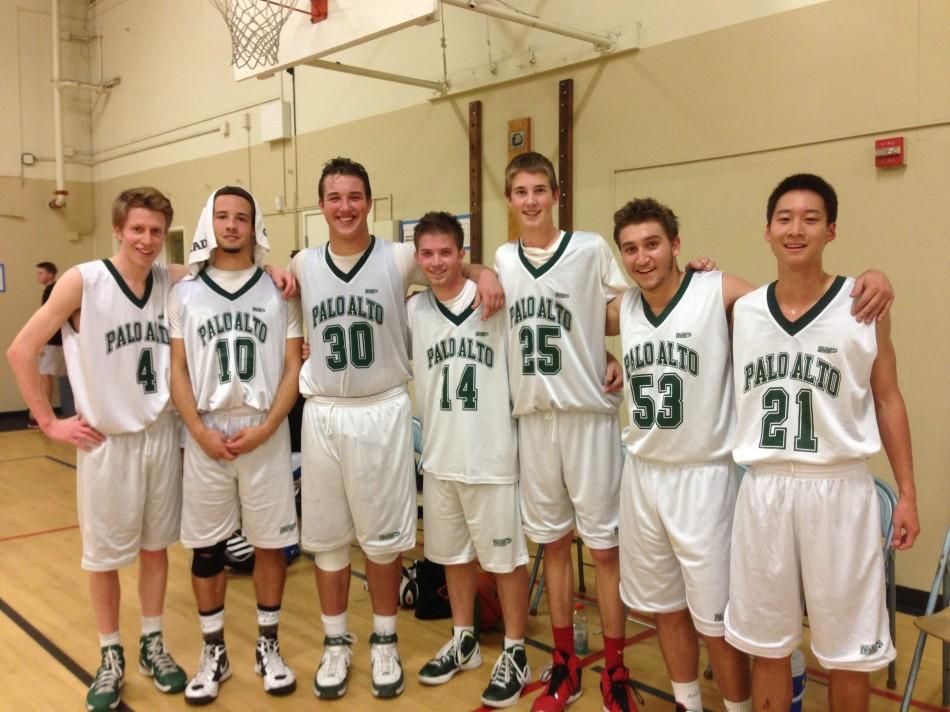 Team Event poses or a picture after a game. With a variety of skill sets and a mediocre regular season, their play finally gelled towards the end of he year for an "eventful" season.

While many students can engage in basketball as children, by the time high school rolls around, opportunities are more limited. For upperclassmen especially, the chance to play basketball is greatly diminished. Despite the number of Paly students with basketball backgrounds, this year, Paly’s varsity basketball teams contain a grand total of 11 upperclassmen.

While this number sits lower than usual due to the youth of this year’s girls’ team, the number of upperclassmen involved in school basketball constantly remains low. As a result, students who still enjoy the game but cannot compete on the varsity team for a variety of reasons find alternate means of playing. One such option is playing National Junior Basketball (NJB).

“Playing varsity was too much of a time commitment for me, but I still wanted to play,” Edward Mei (‘14) said. “Also, it’s just a great opportunity to compete with a bunch of your friends; it’s fun more than anything.”

NJB is a 30-year-old non-profit organization that offers organized basketball opportunities to boys and girls in first through 12th grade. Since its founding in 1984, the program has grown to encompass over 25,000 participants in six states.

According to the players, the atmosphere of the league is very relaxed. A competitive nature still exists, but room for error is much larger than in high school basketball. Practices are optional and consist of open gym time to scrimmage.

“While I could have tried to play varsity, NJB is much more fun and relaxing than playing [Paly] ball,” Fuery said. “It’s also much less of a time commitment, which was key during those college apps.”

At younger ages, tryouts are a common way to divide the large pool of NJB players into equal teams, but as players grow up and the number of teams decrease, teams are put together by choice. This past year, Palo Alto students formed two teams and developed a friendly rivalry.

Mei and Fuery helped compile one of the teams, incorporating Frankie Comey (‘14), William Yang (‘14), Viking staff member Chris Smith (‘14) and players from Gunn. The players identified a large amount of team chemistry as a reason for success, citing the experience that they had playing together.

“I played with every one of those guys in some place or another before,” Mei said.

With no real coach and plenty of experience playing with each other, practices were optional. Fuery attended a grand total of three practices during the season and Comey attended close to none. Every practice generally constituted two hours of scrimmaging as well as Smith not wearing a shirt.

Some of the time they did spend practicing, however, was used for creating plays and naming them after Paly girls. The mechanics of the plays themselves had little to do with the girls’ names, but they did correspond to whoever was to received the ball in the end. As instructed by the players, the names of the plays cannot be disclosed.

Despite their lack of practice, Mei, Fuery, Smith, Comey, Yang and company won a majority of their regular season games including both their contests against the other Palo Alto team.

“We really played well all season and were in every game,” Fuery said. “We played our best ball in the playoffs and just came up a bit short in the end.”

In addition to a competitive bond with the other Palo Alto team, Mei’s team engaged in a rivalry with a team from West San Jose that created some serious heat. During a game between the teams, a West San Jose player started belittling Smith, and blocked one of his shots. After some shoving and elbowing, Smith responded by throwing a punch, starting an altercation that the fans got into.

The incident made for an interesting rematch in the semifinal round of the playoffs. Both teams received warnings before the start, but the referees called a very strict game and the previous incident didn’t manifest itself. Despite starting the game off with a 20-0 run, though, the team ended up losing and finishing its season on a disappointing note. Fuery, however, enjoyed the whole incident and feels that the team became close-knit.

“[We’re] like a covalent bond,” Fuery said. “We stick together man, even if things get heated.”

“Our team was full of interesting people,” Brown said. “Only three of us had actually played basketball on a team before.”

With a wide range of abilities, the team’s play compiled a variety of styles. Shapiro, having a strong basketball background, provided an offensive threat. Anderson, on the other hand, had little to no basketball experience and got in frequent confrontations as a result of his aggressive style. Finally, Kannappan played scrappy defense, annoying other players in the process.

While one could argue that the variety of skill sets featured might have need some management and time to gel together, structured practices were nonexistent. By Smith’s accounts, the team had one or two practices in total, never developed plays and only interacted with a coach when a team parent would sit on the bench with the players during games as required by regulations.

“We would show up to games and the other team would have three or four coaches,” Smith said. “We would get there five minutes late with five people, the minimum amount of people to play, and a random parent to coach. Whenever we beat a team like that, it was just pretty funny.

Given their unorthodox combination of players and lack of practice, the season had its ups and downs. During the regular season, the team lost a majority of their games. Shapiro remembers one memorable game, however, where they won in the closing seconds.

“Our third game of the season, the game was tied and [Young] got fouled with about a second left and hit a free throw to win,” Shapiro said.

This example of timely playing proved not to be a fluke as the team made it deep into the playoffs. Starting off as the 6th seed in a single elimination tournament, they beat the third and second seeds in their first two games to advance to the championship.

In the final game, however, they lost to West San Jose. After playing the other team earlier in the season, they expected to once again defend against a lot of three point shots. West San Jose, however, changed their game plan and drove the ball more, scoring from close range. That, in combination with a couple technical fouls, cost the team the game.

“NJB was fun,” Brown said. “I’d recommend it to anyone who has a group of friends that have even a little bit of athletic talent.”

A league of their own