Boys in black – The Viking Magazine

Softball, baseball, tennis, track, swimming, lacrosse; with so many sports going on at once at Paly, it’s hard to imagine that there could be even more choices unknown to most of the student body.

Although Paly has long prided itself on the athletic capabilities that its students have, other sports that sections of the student body take part in are often overlooked. Martial arts has a hidden community within Paly, with several students in each grade participating in a form of systemized combat techniques.

Without having established practices for martial arts at the school, Vikings interested in becoming involved in the activity have to seek out studios outside of Paly. Having such a time-consuming interest has forced many that were formerly involved in the martial arts community to drop out, favoring a sport that is more actively connected to the Paly community.

Among the few that have stayed with martial arts throughout high school are Johnny Lee (‘15) and Daiki Minaki (‘14). Both students have continued with their form of martial arts outside of Paly, participating in different forms of self-defense activities. Lee began taekwondo in elementary school as a supplementary after-school program with his Korean school. Although other Palo Altans participated in taekwondo as children, Lee is more unique because he persisted with the activity as he grew older.

“It was around fifth grade when I actually joined a studio,” Lee said. “I mainly enjoyed it because of the sparring. It seemed more dynamic, and I thought it would be a good way to get exercise.”

Lee chose to continue on with taekwondo, rather than going into a sport that more of his school peers were involved in, because of the unique advantages it offers.

“Taekwondo is different from other sports in that it is more standardized,” Lee said. “I chose to do taekwondo because it has a lot of benefits in self defense. Also, it is very good for your cardio – it’s just good for your body overall.”

Minaki, like Lee, maintained his involvement in the martial arts community as he went on to high school. He began kendo, a Japanese form of swordfighting that uses bamboo swords, in sixth grade.

“My dad made me want to start because he knew about it in Japan,” Minaki said.

Competing in a sport always has drawbacks for an athlete; time consumption is a challenge, and during high school many people have to balance their schedule to include activities they wish to partake in while still taking care of their schoolwork. Having to go outside of school for martial arts makes it harder to pursue, and it is difficult to continue during the school-year because of the demands that classes at Paly have. Both Lee and Minaki have practice at their studios three times per week. Although Paly sports typically have practice five times per week, these practices do not require the additional time it takes to commute to an off-campus site.

“Junior year has been pretty tough, so I haven’t been going as often, but ideally I would be going [to the studio] around two to three times per week,” Lee said.

Aside from the time taken for his own personal instruction, Lee also teaches taekwondo to children at his studio. He began teaching kids when he was a freshman and currently works with grade-school students, but hopes to proceed on to teaching middle schoolers in the future. Because Lee himself learned taekwondo at the same age as the children he trains, he sees the importance in being a good mentor for them.

“This is a period of time where they don’t really focus a lot, but there are a few talented people that soak in everything they learn,” Lee said. “You have to teach them the concise way so that they actually learn something from their years, instead of wasting them playing around in the studio.”

“In America, we try to focus not so much on the Korean aspect because we want to be welcoming and open,” Lee said. “Anyone can do taekwondo, you don’t have to be Korean to do it.” 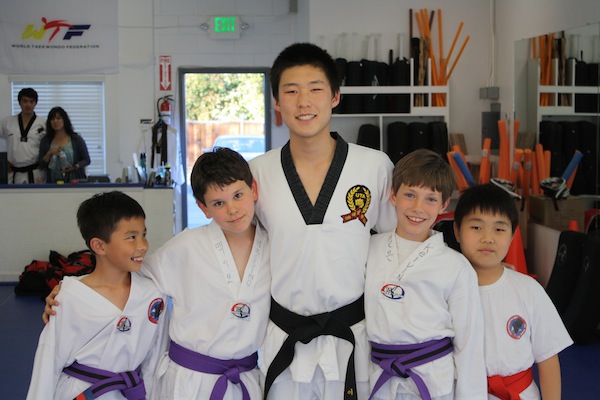