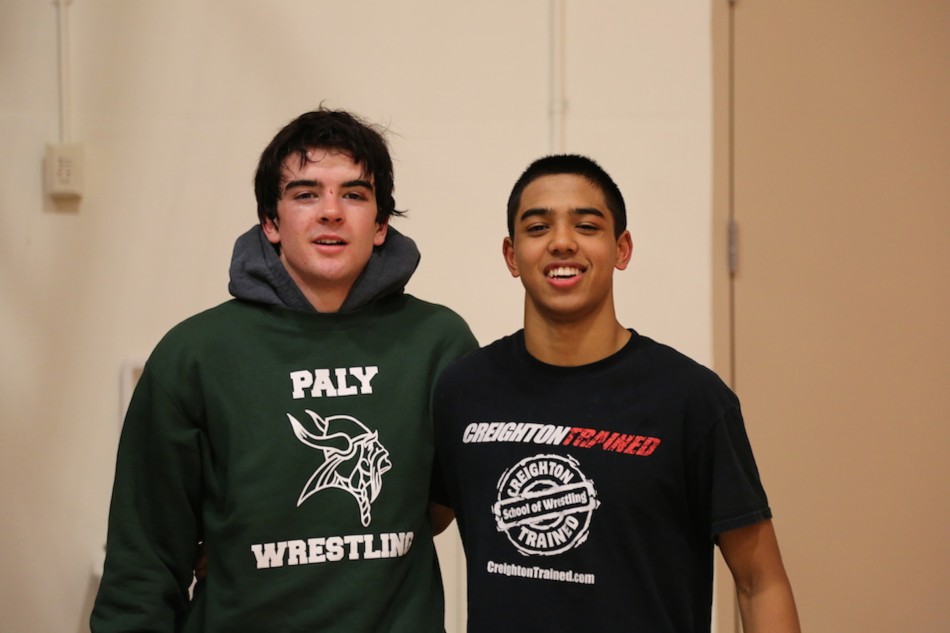 Paly wrestlers Seth Goyal ('17) and James Giaccia ('15) pose together after a meet.

At Paly, some athletes have older siblings on their sports teams who they can look to for guidance and inspiration. These teammates share a last name and a bond that is unique from the relationships between other members of the team. Although wrestlers James Giaccia (‘15) and Seth Goyal (‘17) are not related, they do share a brotherly bond similar to that of true siblings.

Giaccia was first introduced to the wrestling world by one of his older brothers, Nicholas Giaccia (‘08), and he soon became immersed in the community himself.

“My older brother Nick wrestled at Gunn,” Giaccia said. “He also then wrestled in college at [University of California,] Davis. He kept me around the sport and I just fell in love with it.”

Although Giaccia had an older sibling that went through the same experiences he was going through, Goyal didn’t have someone in his family to learn from. However, when Goyal met Giaccia when he was in middle school, things changed for the both of them.

“The first time I saw [James] was when I was in seventh grade and he was a freshman wrestling for Paly,” Goyal said. “Since my head coach, who is now the head coach at Paly, was working with him at the time, I would see him occasionally if he came to my practice or if I would go to his practice. We were about the same weight, so I would wrestle with him.”

As they traveled together for training camps and wrestling matches, their relationship grew. Giaccia reflected on these experiences in a message he wrote to The Viking.

“We have been through so much together,” Giaccia wrote.  “Whether being on the California State team or traveling up to Gilroy for a week to train… [Our relationship] goes beyond wrestling.”

One memory the two share is driving the long distance to Gilroy for a five-day wrestling camp, where various clinicians and college coaches came from around the country to teach different wrestling styles.

“We’ve made [the drive to Gilroy] a bunch of times together,” Giaccia said. “It is always funny because we always pass by the same places and go ‘Remember this?’ or ‘Remember when we did that?’ It is just fun to have the trip together.”

Another experience the boys shared was being a part of the California State team together during the summer of 2014.

“We were representing California at the National Tournament,” Giaccia said. “It’s where all the best guys in the country go. It’s a huge bracket; it’s a 164-man bracket in one weight class and it’s your age group. It’s basically [where] the best people wrestle each other. Me and [Goyal] trained all summer long for it. It was just a great experience we got to have.”

Paly head coach Braumon Creighton believes that the two boys became especially close while training this past summer on the National team.

“They’ve gotten tight.  They spent a lot of time together over the summer.  We went to the Olympic Training Center together this summer, we went to Fargo, we were all part of the California National Team, so they were on the team and I was one of the coaches.  So that was a lot of time spent this summer training.

Through all the experiences they have gone through together, Giaccia and Goyal have both gained a lot from one another. Although Giaccia has two older brothers, his relationship with Goyal has allowed him to see what being the ‘older brother’ is like. And for Goyal, he has gotten the brother he never had.

“I get to be the older brother for the first time, which is nice,” Giaccia said. “I care about [Goyal] a lot. I treat him like a little brother. We text every single day. We talk every single day. It is basically the same relationship I have with my brothers, but I see him a little more.”

Older brothers often act as role models to their siblings, and Giaccia fills this role in Goyal’s life.

“I view him as an older teammate and someone to look up to,” Goyal said. “[Our friendship] has progressed more [throughout the years] because we have had more time to connect.”

Although the two Paly wrestlers are now close friends, the two did not get along when they first met, according to Goyal’s sister Sabrina Goyal (‘15).

“I would say at first they almost started off as rivals because they didn’t really know each other, then when they started training together they got really close,” Sabrina Goyal said.  “[Giaccia] is like his older brother. [Giaccia] also helped him ease into Paly as a freshman, so that was really nice.”

By forming a strong connection, Giaccia and Goyal have helped one another through rough patches in their athletic careers.

“Goyal has pushed me and has always been there to help me through tough times in wrestling,” Giacca wrote.

The two have also helped each other improve in the physical aspects of the sport by mentoring each other on weight loss tips and skill improvement.

“He’s helped me get more mentally tough and cut weight,” Goyal said. “Vice versa in the practice room. I am better at picking up certain skills than he is. So, if he is having trouble I will help him with a certain position.”

Giaccia recounted a time when they both had to help one another lose weight before an upcoming tournament.

“[One time] we were both 10 [pounds] over [the weight limit] a day before a tournament that was coming up,” Giaccia said. “We both had to cut 10 pounds in basically one day. It was probably the worst experience we had together, but we both pushed each other through and it was good.”

According to Creighton, who has coached Giaccia since freshman year and Goyal since sixth grade, they help their other teammates as well as each other on the mat.

“They both can teach most of the stuff that I teach to the other kids,” Creighton said. “It’s good, the more leadership we have in the room, the easier my job is as a coach.  It’s really good all the way around.”

Goyal’s encouragement in the weightroom and on the mat has not only enabled Giaccia to develop his wrestling skills, but it has also helped Giaccia to grow as an individual.

“Wrestling has made me more of a disciplined [person] and made me appreciate all the good things I have in my life,” Giaccia wrote.  “It has helped me so much, especially because I will be wrestling for American University next year.”

When Giaccia graduates, Goyal will no longer have a partner to practice with, because the younger wrestlers on the team have differing weights and skill levels than him.

“I won’t have a drill partner anymore because there is no one else my size at our skill level, so that is going to be kind of a problem after he graduates,” Goyal said.

Creighton agrees that finding Goyal a new partner will be key in upcoming years.

“We’re going to have to find more workout partners for Seth,” Creighton said.  “I think that we have some kids coming up from middle school that will help us, and then kids that we have this year like [Noah Asing (‘18)] and Nicholas Ogawa (‘18) who hopefully will step up and be quality enough to give him a good look during practice. Seniors graduate, that’s what they do. So we have to reload and keep swinging.”

When Giaccia goes to American University next fall, he will miss the camaraderie of the Paly team that he is leaving behind.

“I will miss the coaches and spending time with the guys on the team [next year],” Giaccia wrote.

Creighton also admits that losing Giaccia will be difficult because of all that he brings to the team.

“James does a great job leading,” Creighton said. “James is a vocal leader [and]he leads by example. He does a really amazing job with that and I’m really going to miss him in the future.”

As for the teammates Giaccia is leaving behind, he advises them to accept the obstacles that they face in upcoming years.

“Embrace all the challenges that come with wrestling and the team and everything else in life,” Giaccia said.

When Giaccia leaves for a new wrestling community, Goyal will be left to form connections with younger teammates. Both of them will move on to practice with other individuals, and although they may not see each other across the mat anymore, they will still have the lessons and experiences that they gained from one another.  The pair may not be brothers by blood, but wrestling together has brought them closer to one another, and has also brought them closer to the sport that they love. 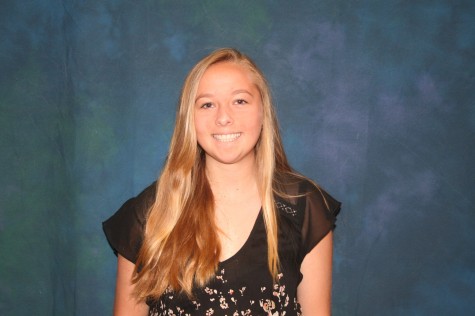 Megan is a senior at Palo Alto High School. She plays lacrosse and soccer for Paly, and loves to support the San Francisco Giants and 49ers. In her free...