Inside the Paly training program, the people who make it function, and the growing number of athletes who rely on them. 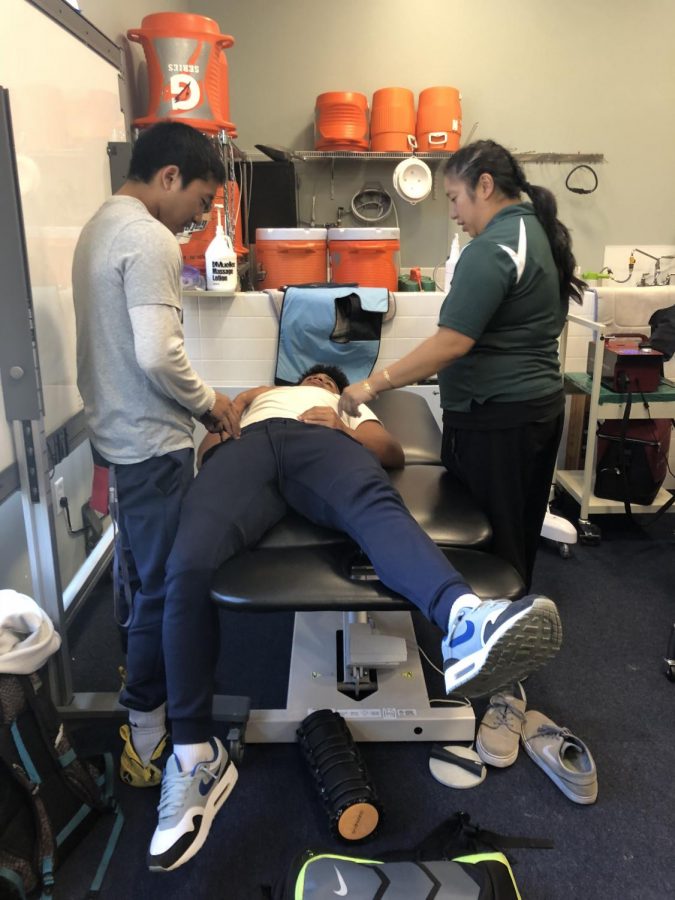 The sun slowly sinks below the horizon and the temperature drops soon after. While many head home, eager to leave campus and eat a warm dinner, athletes gear up for practices and games. In the dark and desolate environment that is Palo Alto High School at night, football players put their pads on, water polo teammates suit up, and cross country runners prepare for that night’s run. However, athletes are not the only ones that must gear up for nightlife at Paly. In the quad across from the Churchill parking lot, Paly’s trainer is on call: ready to respond to any crisis.

For most of the evening, Paly’s trainer floats from practice to practice, game to game: selflessly helping students whenever necessary.

Justine Iongi has been Paly’s trainer for the past three years. Now in her fourth year, Ms. E, as most students call her, reflects on her history at Palo Alto High School.

“The first year, there was no full-time position available for the school so they did stipend work for athletic trainers to cover by season,” Ms. E said. “[Currently] I oversee more than 1,200 athletes, and I take care of all the athletes that are in season, out of season, or associated with Paly athletics.”

On game days, Paly’s athletes face off against rivals and give their all to represent their school. Again, Ms. E can be seen on the sidelines, ready with a bucket of ice, athletic tape, and treatment table.

Ms. E’s immediate response has mended numerous injuries and prevented countless others; athletes have grown accustomed to prompt treatment. At games and practices, she is there. After school and during a prep, she is there: graciously tending to all ailments.

“I do rehabilitative and treatment work with them, and also preventative care,” Ms. E  said.

However, with the recent addition of three sports and the numerous athletes associated with them, the school district must ask itself whether it is asking too much of one full-time trainer – and thus doing a disservice to the majority of Paly students who participate in sports.

In total, 1,250 students participate in one or more athletic programs at Palo Alto High School. This fall, 16 teams — including both boys and girls teams at every level — are running simultaneously. Throughout the year, more and more students will earn their spot on a team’s roster. By springtime, 21 teams will be actively competing. Assuming a very rough estimate of 20 participants per team (although many teams, like track, have many more), Paly’s single full-time trainer is tasked with taking care of more than 420 students. With this year’s addition of two new teams, Boys Volleyball and Girls Field Hockey, this number has grown. The number of student-athletes is expected to rise once again in the coming years with the addition of JV teams of each of the new sports. There is, however, only one number that has not grown: the number of trainers that Paly provides for their students. Iongi finds herself unable to attend all of Paly’s games when multiple teams are playing simultaneously, having to prioritize sports where injury is most likely. With a larger-than-ever number of student athletes at Paly, there is more demand than ever.

In her time at Paly, Ms. E recognizes how her role has drastically changed.

“When I first started at Paly […] I was allotted a certain amount of hours — from 10-15 hours a week depending on coverage — and I was mostly here for games,” Iongi said. “If I had hours left over, I would come in after school and help treat athletes with injuries.”

At the time, limited hours meant that Iongi could not serve athletes as well as she wanted.

“I did kind of a triage in terms of ‘I’m here for coverage in case someone’s hurt’, but follow up care wasn’t there,” Iongi said.

After her successful first year, and a clear need for a full-time trainer, Ms. Iongi was offered a full-time position at Paly.

“The great thing about being full time is I’m here during school hours, so if kids have a prep 5th, 6th, or 7th — and I even come here during lunch time if they don’t have a prep — and they want to get some treatment done beforehand, I’ll be available,” Iongi said.

Since then, Ms. Iongi’s role has changed in many ways.

“I slowly got into a lot of association with the school versus just athletics” Iongi said. “I got into a lot of admin work in terms of overseeing the students injuries and their sport, but I know their schedule. I’m part of their school life and their athletic life as well. I was just getting more involved in what the school standards are and athletics standards are and trying to be that medium in-between.”

Iongi admits that with her greater involvement in the school, and a greater number of students requesting her help, she finds herself spread quite thin.

Those numbers have increased astronomically in recent years.

“[That figure] went up because now they know about me. I’m here to help you, and help mediate you going and participating in practice or games. The number is going up because we added two more sports —  boys volleyball and girls field hockey — this year so that particularly bumped up the ratio. I feel sorry for the students because sometimes kids have to wait 30 minutes for me to see them just because it’s only me.”

After her realization of this issue, Iongi knew that she had to do something, she first approached Therren Wilburn-Sudduth, Athletic Director at Palo Alto High School.

“We’ve added three new sports. Boys volleyball added 14 to our student athlete count, cheer’s at 41, and field hockey’s at 20, so right there you’re looking at 75 more student athletes. Wilburn-Studduth said. “Field hockey and [boys] volleyball only have varsity teams, so there’ll probably be another 35 to 40 student athletes added within the next year. Definitely it has spread our trainers more thin —I’ve seen the repercussions of adding some sports.”

I feel sorry for the students because sometimes kids have to wait 30 minutes for me to see them just because it’s only me.”

Iongi talked with trainers from different public schools, as well as some at private schools, and found that many were experiencing the same problem as she was.

“I did call [about] the ratio [at other schools]. I know these may be private schools, but Sacred Heart has two full-times and a part-time [trainer] , and that’s ideal for me because I just see so many students. [Paly] is not any other high school, there’s a ton of sports that are offered, and that’s awesome. That’s part of what makes it so great— the diverse sport background — but not a lot of public schools have this many athletes,” Iongi said.

“What we’ve done is talk to our athletic directors to see what we can do to help get this conversation going on our end,” Iongi said.

“It’s just groundwork conversation [so far]. The thing about adding [another full time trainer] is that Gunn has to add a trainer as well. They have not a lot less student athletes, but not in the same realm as us. I think they have around 1,000 to 1,050, but even still, one to 1,050 is unsafe for them as well,” Wilburn-Sudduth said.

“The biggest that I think we’ve both were a part of was going to the athletics committee meeting. That’s where we explained to all of Gunn’s admin, like their athletic director and one of the committee members, that this is how many teams we have, this is how many numbers we have and there’s only one of us,” Iongi said. “This is how many hours we’re working, and we need more help.”

School officials, committee personnel, and community members were also not happy to hear about the training situation. However, their disappointment did not materialize into any action. They  told Iongi, and others, that “‘We support this, I’ll bring it to the next step’, but I’d never get any response or follow up back,” Iongi said. “I know it’s a huge thing, a whole other payroll for somebody, but I’d invite parents or anybody to just sit in here and see the volume of kids. I just want to make sure that everyone’s safe and everyone’s healthy and that’s my main goal.”

Enrollment in Paly’s many sports is not expected to decline in the coming years, and many feel that without an extra trainer the likelihood of injury will increase greatly.

“I think we should have two full-time trainers,” Wilburn-Suddeth said. “I talked to the district about it at our steering meetings. I think there is sufficient need for us to have two people, especially with the number of sports we have and the number of student athletes we have. We have about 1,250 student athletes and that ratio of 1 to 1,250 is unsafe.”

I just want to make sure that everyone’s safe and everyone’s healthy and that’s my main goal.”

In the past few months, a lack of progress has been disheartening to all involved. However, Iongi has a plan and is not worried.

“We went to that committee meeting and we had overwhelming support. I know there are different committees and board members, and there’s a certain pathway you have to take, but  I always encourage the students to advocate. I don’t know which pathway to go, but I know that if [officials] see the numbers, and hear the students, we can see the change that I want to see.”