Hidden Life of a Teacher Athlete

Paly teachers are well known for their educating capabilities. However, many of them are secretly amazing athletes as well. 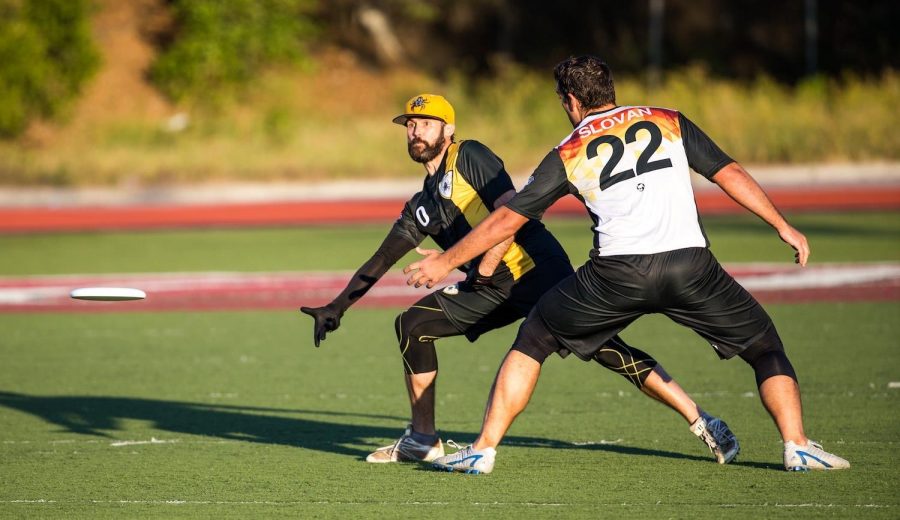 Skating across the roller derby arena, an athletic figure wearing a helmet and knee pads elbows her way past the opposing blockers. With a face of determination and a heart full of grit, she paves the way for her jammer to come around and score a point.

One might think this to be a fellow classmate. However, this is actually one of our teachers on campus. Probably everybody has heard the expression “student-athlete,” but has anyone heard of a teacher-athlete? This phrase might seem oxymoronic to some; how could teachers have a life outside of school? Isn’t all they do at home grade papers and plot seemingly infinite homework assignments?

On the contrary, it’s actually quite common to find teachers in amateur adult leagues or adult club teams for the most popular sports such as basketball, football, soccer, or baseball. However, finding a teacher that does a completely unique sport is not as easy.

Here at Paly, two of the most prominent examples are: Christopher Farina and Apryl-Joy Pascua.

Farina’s sport, ultimate frisbee, is a non-contact competition in which two teams of seven try to score in the opposing team’s end zone. The playing field is similar in length to a football field but slightly narrower. Unusually, there are no referees, which leaves  players responsible for following and enforcing the rules.

On the other hand, Pascua’s sport of roller derby is one that involves a lot of physical contact, as described previously. It is played on a track-shaped roller rink, with two teams, consisting of five players, a jammer and a four blockers. The goal of each team is to have their jammer lap as many opposing blockers as possible to score points. Blockers work together to help their own jammer get through, while also blocking the opposing jammer.

When not teaching psychology, spending time with his kids, or exploring national parks, Farina can be found elegantly flicking his frisbee across the length of a football field or making a diving catch and snagging the disk mere inches from the grass.

You will often be able to find Pascua skating in circles at your local rink or lifting weights in preparation for her next season when she is not writing lectures about supply and demand or the pros and cons of both communist and capitalist markets.

Somewhat unusually, Farina didn’t grow up playing frisbee, he actually picked it up by chance the last year of high school.

“My senior year I had a friend whose younger brother had … convinced his older brother and all of his friends, which included me, to not play our spring sport… ” Farina said. “And instead learn how to play Frisbee over the winter and then play in the spring.”

Like Farina, Pascua started skating not when she was little, but instead halfway through her teen years. She picked up skating after going to a roller derby rink for a birthday party as a kid.

After being told she was “pretty decent” at it, she decided to learn more about roller derby and just attend a local practice the following day.

“The practice was outside and I just kind of showed up,” Pascua said, “And the coach was like ‘what are you doing here’ and I was like, ‘I’m here to check it out’ and there was a dusty bag, an army bag full of gear, and I been skating ever since.”

Although both Farina and Pascua’s stumbles into the world of their respective sports were somewhat accidental, the endurance of it in their lives is due to anything but chance.

Farina continued to play frisbee through college, joining amateur leagues. After finishing college, his connections with some old friends led him back into the competitive frisbee community.

He had to balance his love for the sport with the ever-increasing workload of his job as a teacher. Some competitions could take up multiple days, and be as many as two or three states away.

“There were definitely moments when it was really nuts, the district that I was first teaching at had to get special permission to take days off that were up against the weekend, and we only accrued one personal day every year,” Farina said. “I had to request a special leave or use up my sick days instead when I wasn’t actually sick.”

Most of the time, Farina was able to toe the line in terms of his delicate  balancing act. He managed a hectic schedule of practicing during the week, traveling on the weekends—sometimes as far as Vancouver—then rushing back to teach at eight in the morning the following day, not to mention the papers to grade, homework to assign, and tests to write.  At times this equation didn’t leave enough space for both passions, he had to make sacrifices.

“It was the first year that I had started teaching in New Hampshire, my team had qualified for the world championships, which were on the other side of the world, and you can’t fly directly there,” Farina said. “The people that went took off a week or two weeks, and to do it, I really would’ve had to take off a full week of school and I couldn’t get permission for that.”

At first, these sacrifices were for his teaching career, but later on, his priorities shifted towards something even more precious.

“My first son was born and that summer there was a world championship game up in Canada,” Farina said, “I did go, but it meant my wife was on her own with our kid who was six months old. I went for the week and came back and that’s the last big tournament that I’ve done since having kids.”

Pascua also juggled countless activities at once. Before COVID-19, Pascua was teaching part-time as a substitute teacher while competing and practicing derby on the side, all while trying to complete another degree at graduate school.

“When the pandemic hit everything stopped and that included roller derby,” Pascua said, “So, everything just seemed to line up: I started working [full-time] and I had time for it because I wasn’t practicing three times a week.”

Despite activities lining up well for Pascua, she has still had experience with the struggles of balancing her multiple activities.

“It’s definitely difficult because not only was I going to practice three times a week, I was also cross-training outside of practice,” Pascua said, “I was a substitute teacher, I was working a before-and-after school program, and then before that I was a middle school teacher. It was definitely difficult to juggle all those things for sure.”

Even with the difficulties roller derby brought her, the sport will always, always be worth it, especially with the support she receives from her teammates.

“[Roller Derby] is a team sport,” Pascua said, “I kind of have a hard time asking for help from people. I always think that I have to go at things by myself, I just grew up that way. I felt like if I asked for help, I was bothering people. But with roller derby you can’t win it by yourself.

Even though Pasuca is currently taking a break from Derby, partially due the pandemic, partly because she has to prioritize school, both as a teacher and a student. The sport, along with the thousands of memories of competitions, practices, and laughing teammates, are things that will never leave her body, mind, or soul.

“All I have to do is skate. Nothing, nothing beats that,” Pascua said. “Anytime I feel like I’m having a hard time with school, or life, I just remember that I am strong enough to make it through those kinds of things. I am resilient. I can put in that hard work because I’ve done it before and I know what it takes to get to where I want to go.”

Having experienced what it is like to live the life of a teacher-athlete, the parallel to our more commonly found student-athlete, both Farina and Pascua have insights that others may lack.

“[Frisbee] definitely gives me empathy for student athletes who are in season and when they’re not in season,” Farina said. “How everybody’s trying to balance what they’re doing with their sport. Or even people that are playing music or something like that. Anything that’s going to end up taking a good chunk of your time, I definitely have empathy for them.”

“Roller derby saved my soul,” Pascua said, “I was in a marching band, and I didn’t play that many sports when I was in high school. I kind of just started [playing roller derby] so that way I could be a part of a culture. I really never thought I was an athlete, and it wasn’t until my very first roller derby tournament that I realized I was.”