Fans In the Stands 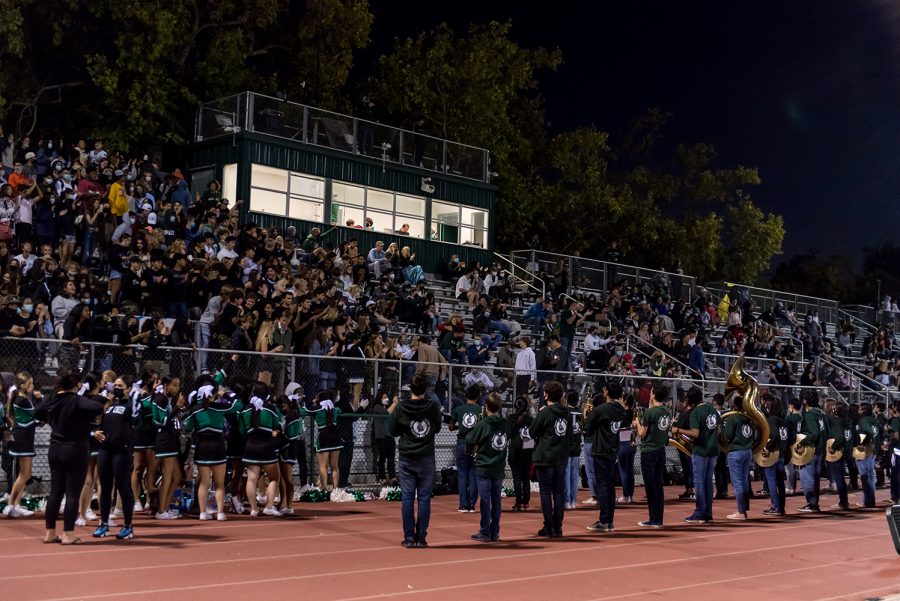 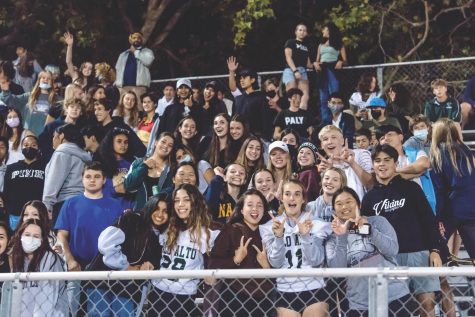 From the energy and passion that surged through the Paly crowd, it seemed as if the varsity football team had just won a championship. But in fact, they were down 42-0. Somehow, the fan presence underneath the Friday night lights is enough to make every game—even the most catastrophic of defeats—feel like a win.

Paly’s school spirit at sports competitions is well recognized by the Palo Alto Community. The heart of Viking spirit is the loud, energetic student section spilling out of the bleachers at almost every home football and basketball game. Fans play a crucial role in helping teams succeed and may hold the key to Paly’s state-renowned sports programs. Unfortunately, the echoing chants of Paly’s student section came to an abrupt halt when the COVID-19 pandemic hit, where the majority of fans were banned from entrance.

During the 2020-21 Paly sports seasons, parents were the only spectators permitted at games. The CCS board made this decision in order to adhere to the Santa Clara county guidelines for preventing the spread of the virus. Without the support of their fans, Paly athletes found it harder to keep momentum throughout their games.

There was a glaring decrease in the performance of the Paly varsity football team compared to previous years. Paly ended their 2020-21 season with a record of 2-3, considerably worse compared to their record of 7-5 during the 2019-2020 season and the 10-2 record of the previous 2018-19 season.

While team performance may have been influenced by a variety of other factors, such as losing the 2021 senior class and not having access to the Peery Center weight room; it’s hard to not place partial blame on the loss of the faithful Paly fans.

This same theme was present across other sports as well. Starting shooting guard for the boys varsity basketball team, senior Matt Corrigan, also felt the negative effects from the absence of fans.

“It was definitely much harder to gain momentum and go on runs without many fans,” Corrigan said. “In a normal setting, we can feed off of the crowd’s energy, but that wasn’t the case this past year.”

Multiple studies, including several published in the Journal of Sports Sciences, have shown that having fans in the stands creates a significant impact on the result of the game- across all sports. When facing an opponent at their home field, the odds of leaving with a win are much lower for the visiting team. What could be the reason for this? What does it come down to? The significant increase of fans at home games that give teams the home-field advantage.

Extensive independent studies that spanned across the NBA, NFL, and MLB for the league’s entire existence found that in each respective sport, on average, teams playing at home won significantly more than visiting teams. In the NBA, home teams won 62% of the time. In the NFL, home teams won 60% of games. The trend did not change in the MLB either, with 54% of teams winning at home. These studies all point to the fact that when a team plays at home, they simply have a better chance of winning than when playing away.

However, playing at home versus playing away doesn’t change the validity of the venue.  Equipment is regulated to never provide an unfair advantage, the rules are the same for every team, and rosters do not fluctuate often in high school athletics. So what makes home field advantage so valuable? The fans.

For the Paly teams that draw in the biggest crowds, the absences of a fan section hurt the most.

Now with school back in person, vaccination levels rising, and COVID restrictions slowly lifting, fans are once again coming back to the stands. Even though half the student body has never been to a Paly football game or been part of the student section before this season, the Paly spirit has never been more alive.

“It’s really great to see the same intense energy coming from Paly fans, even after a year without games,” junior Eoin O’Connell said.

There is so much that is overlooked regarding fan’s impact on games. Fan support has effects that many would not even consider. Even when teams are not performing at their best, the passion Paly fans bring to each game is incomparable.

A considerable amount of data has exposed the fact that part of home court/field advantage comes down to referees subconsciously being in favor of the home team, specifically due to fan presence. A study conducted in a German soccer league, Bundesliga, found there was a distinct difference in the amount of fouls called when there were fans in attendance versus when there were not fans.

In eighty three matches analyzed last year, visiting teams were penalized substantially more when they were playing in front of fans compared to when they played with no fans at the same stadium.

More fouls were called in empty stadiums last year than full ones in years past—perhaps proving to be a sign that referees feel less entitled to favor the home team while playing in empty stadiums.

Fans not only have an effect on the referees and players, but more importantly, they have the potential to dictate the game’s outcome. Home teams in the Bundesliga scored fewer goals in empty stadiums than they did in full ones. They took fewer shots, and the shots they took were considerably less efficient. According to the same study, home teams also took less aggressive attempts to score, less corner kicks, less crosses, and dribbled significantly less.

All of these findings go back to the significance of having fans in the stands. Fans prove to be a crucial factor when it comes to a team winning or losing. They provide energy for teams that need to kickstart their momentum. 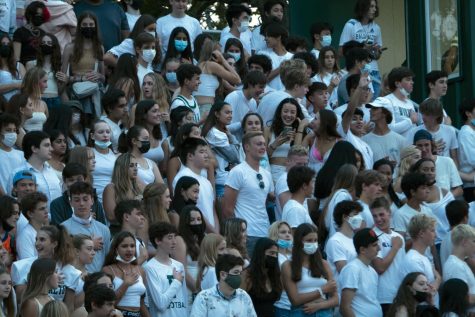 The Paly football team, while having a rough start to this season, has already felt the effects of the return of fans. While playing traditionally very strong teams, such as Serra High School, Paly’s varsity football team has fought to stay in tough games with the support of the student section. After being down 42-0 in the first half, the Vikings fought back, outscoring Serra 14-0 in the second half.

“It is a whole new environment with fans,” Starting senior tight end for Paly football, Lucas Black said. “They bring so much energy and hype to the game, which gets everyone on the team hyped too.”

Both the freshmen and sophomore classes have already become integrated into the Paly football environment in just the few home games they have attended this season.

“It was really cool to see how almost the entire school comes to support the athletes, even though their most recent performances have not been the greatest,” Freshman Ryan Stonich said.

Even students who do not particularly care about football come out to show their support for the team and take advantage of the social environment that the games provide.

“I would probably go again just for the experience of meeting new people and being around friends,” Stonich said. “Not exactly for the football game itself, but just because everybody there is so nice.”

Black suggests that the abundance of underclassmen actually contributed to the increased energy and helped the spirit of the players. 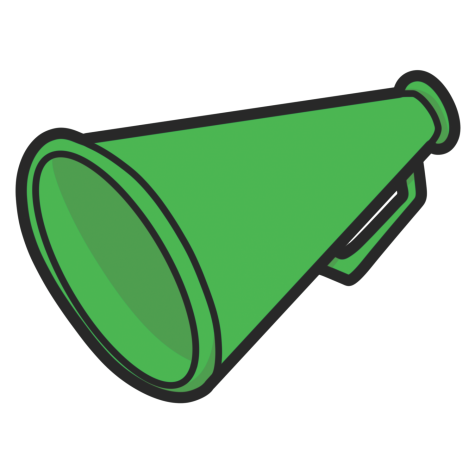 “I think the energy at Paly is even better than previous years because a lot of the underclassmen have never been to high school sporting events, so it is a first time experience for a lot of people which leads to a big turnout and lots of energy,” Black said.

Paly football is back in full swing with many students, whether veterans or newbies, showing full support for the playing team, enjoying each season to the fullest. While all Paly sports have been reopened for fan attendance, for some sports, there is hardly a noticeable change in attendance. For the Paly sports where student viewership is not the norm, the biggest change that the pandemic guidelines had on their viewership was the lack of parents at events- a variable that hardly affects the players. Sports such as cross country, golf, badminton, received little viewership from Paly fans in previous years.

“I think the lack of viewership stems from the fact that we are running on courses in places like San Francisco or Monterey and they tend to be a little out of everyone’s way,” junior cross country runner Kyle Park said.

While travel distance and length of the events are major factors in the lack of fans, what it really comes down to is the popularity of the sport. For sports like football or basketball, people are bound to come to games simply due to the reputation they have, whether it be at a professional or high school level. These sports have a reputation that events are not just games, but social gatherings. However, for the less popular sports at Paly, even if the team is doing well or historically strong, people tend not to come because there is little interest in the sport.

“It sounds sad to say out loud, but people think of cross country as more of a conditioning than anything,” Park said. “They think that because you run in other sports, running itself is not it’s own sport.”

The Paly varsity girls volleyball team felt the difference that fans make at a close game. On September 21, the Vikings faced cross-town rival Gunn High School. For a sport that is used to not playing in front of basketball or football size crowds, they certainly got a taste of the feeling. In a commanding 3-1 victory over the Titans, the girls volleyball teams give credit to the enthusiastic Viking student section.

“It really helped build confidence for me and for a lot of quiet and self reflective players on our team in terms of athletic performance. on another note, it made winning feel so much better. That was probably the most fun game I’ve ever played in my whole career and I think the fans had fun too. The fans really boosted that Paly athletics atmosphere/bond – Thea Enache (‘22)

The girls varsity basketball team saw few fans beyond parents and friends even in the years before the pandemic. As an injured player for most of last year, junior McKenna Rausch was able to directly observe the shift in energy from season to season. She felt that most of the team’s energy fed off the cheering she led on the bench, not from the minimal fans watching the games.

“I think that the girls basketball team doesn’t usually have many fans in general, so even without COVID’s regulations, it’s always been up to the bench to show up and cheer,” Rausch said.

In order to compensate for the lack of fans, sports such as cross country and girls basketball put their “all” into supporting and cheering for their teammates. By holding team events and encouraging each other on the sidelines, these sports are able to maintain high enthusiasm, but it is hard not to wonder what they could accomplish if more Paly fans were to be in attendance. Fans are an integral part of any sport, so whether they are popular or not, students should try to support all of the Paly sports.

“Just seeing a group of people supporting you, wearing your jerseys, with signs, sharing the team name, and cheering the team on means a lot to us players,” senior varsity soccer player Sebastian Bonnard  said. “Having them there just makes all the difference. It’s just really like an extra player, like the 12th man.”