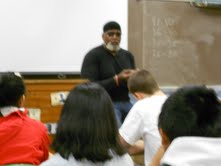 Dr. Harry Edwards, an African-American sports sociologist and Professor Emeritus of Sociology at the University of California, Berkeley gave an interview at Palo Alto High School this Tuesday afternoon, Feb. 21.

Edwards (age 69), founder of the Olympic Project for Human Rights (OPHR) that protested racial discrimination in sports and inspired the famous “Black Power” salute protest by Tommie Smith and John Carlos at the 1968 Summer Olympic Games in Mexico City, was invitited to the classroom of social studies teacher David Rapaport for an interview before roughly 40 students and five faculty.

Addressing an array of racially charged issues, Edwards, who devoted the early stages of his career to the fight for racial equality for African-Americans as both athletes and front-office holders in professional sports,  continuously stressed the need to constantly combat the racial “social dynamics  [that are so] deeply rooted in today’s society.”

Senior Tremaine Kirkman, one of the students who attended the interview, assessed the value of Edwards’ inspirational visit in an e-mail interview.

“I want to devote my life to changing and helping others just like he has, and to see the end product, how fulfilling it can be, how much you can accomplish, and how deep you can become, was simply inspiring,” he wrote. “Listening to him will definitely drive me to be a better person and leader.”