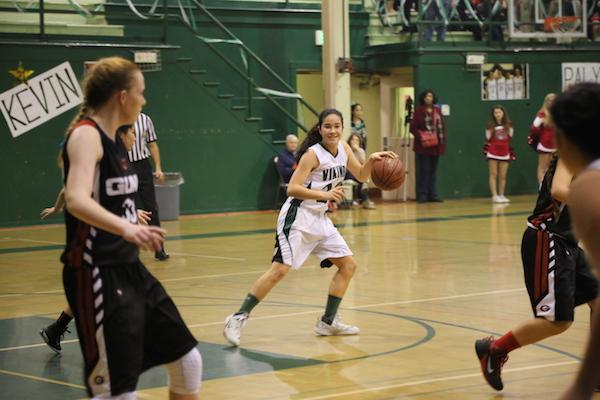 On Saturday night, girls’ basketball faced off against the cross-town rival Gunn Titans. With a large crowd in Paly’s big gym, the Vikings overtook the Titans 35-23 to continue their undefeated league game streak.

“The team was really amped up because it was a rivalry game,” head coach Scott Peters said.

The second quarter saw a little back and forth as the Titans took the lead with an early four points to make the score 7-6. The Vikings’ Julie Chandler (‘17) took back Paly’s lead with two points to bring the score to 8-7. The Titans then followed with another 4 points to bring the score to 11-8. Chandler found the basket for another two-point shot followed by a free throw by Coco Lovely (‘16) and a free throw by Lovely to end the quarter with a Paly lead 13-11.

Despite the second quarter’s shifting lead, the Vikings came out strong in the second half.

“Once we slowed it down in the second half then we executed,” Peters said.

In the fourth quarter, the Vikings proved themselves defensively holding Gunn to only two points.

“We definitely stepped up in the fourth quarter and we came back because we were struggling in the beginning,” Koyama said.

Offensively, the Vikings scored eleven points to trump the Titans two points and to secure the game win with a score of 35-23.

The Lady Vikes’ win was a big one for the team because it was against cross-town rival Gunn and there was a packed gym full of fans for both teams on Saturday night.

“Definitely a big win, we came out thinking it was one of the biggest games of the season,” Koyama said.

Girls’ basketball is now 10-0 in league games and will face off against Mountain View High School next Friday, Feb. 13 at 7:45 p.m. at Mountain View and will determine their league standing.