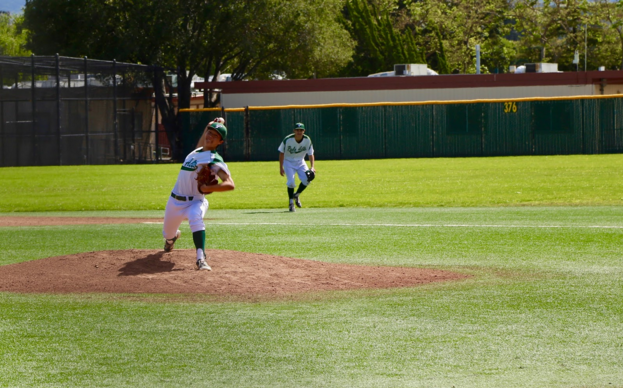 Paly’s scoring started early. After RBI singles from both Max Jung-Goldberg (‘18) and Owen Plambeck (‘16) gave the Vikings a 2-0 lead, Larry Han (‘16) plated two more on a booming double to the center field wall.

Gunn responded by scoring two runs of their own in the top of the second off of Vikings’ starter Jeremy Akioka (‘18).

Paly tacked on another run in the bottom half of the inning on an RBI triple by Ben Cleasby to extend the lead to 5-2.

No more runs were scored until the bottom of the fifth. Akioka finished with 3 IP, 2 ER and 2 strikeouts while Ryan Chang shut out the Titans in three innings of relief work.

Paly rallied again scoring five runs in the bottom of the fifth to lock up the victory. Key hits from Jung-Goldberg, Justin Hull (‘16), Plambeck, Albert Han (‘16) and Cleasby demoralized the Titans one after another.

Paly put the game away easily, securing their 17th win of the season.

“It was pretty clear the team we played just wasn’t on our level,” Akioka said. “I think we did a good job of coming out and throwing strikes and pounding the zone, so overall it was a good win.”

“Just be aggressive, get that first pitch fastball,” Plambeck said. “They don’t have anything that’s going to strike us out or blow by us so just look for something hittable and smoke it somewhere. Obviously whenever you put up ten runs, good day. Top to bottom we swung it pretty well. Obviously we were the better team and it showed.”

Paly Baseball will play again on Wednesday at Milpitas at 4 o’clock.