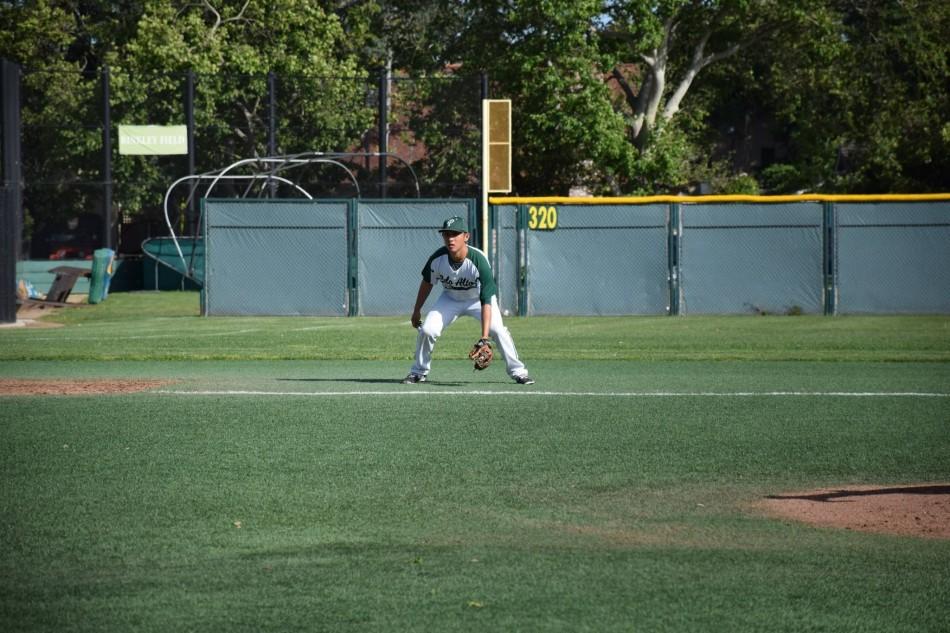 For their last home game of the season, Alec Olmstead (‘16) pitched for the entire game with five strikeouts.

In the top of the first, Milpitas’ first hitter was able to score them a run by being walked, stealing second, and running home after a hit to right field. Paly was not able to tie up the score until the bottom of the second inning until the bases were loaded by Lawrence Han (‘16), Albert Han (‘16) and Max Jung-Goldberg (‘18). Ethan Stern (‘17) and Ben Cleasby (‘17) were both walked, bringing home L. Han and A. Han. Jung-Goldberg came home shortly after when Miltas’ catcher fumbled the pitch, putting Paly in the lead with a score of 3-1.

In the top of the third, Olmstead threw three outs quickly to put Paly back at bat. Two more runs were made in the bottom of the fourth. Jung-Goldberg hit straight to the first baseman, however he missed the catch leaving Jung-Goldberg safe at first. Stern then hit a double to far right field, filling up second and third base. After hitting four foul balls, Cleasby’s hit to far right field was cought, but Jung-Goldberg was able to run home. Justin Hull (‘16) then hit to far left field and was safe at second, bringing home Stern to bring the score up to 5-1.

In the top of the fifth, Milpitas was walked and their next batter was able to get single. He then advanced to third after a wild pitch and ran home after a sacrifice fly that was caught by Cleasby. In the bottom of the fifth, L. Han hit a single and in the sixth Jung-Goldberg hit a double, however neither team was able to score any more runs. The Vikings won their senior day game with a final score of 5-2.

Han commented on his team’s performance.

“For senior day coach gave us all the opportunity to play wherever we wanted and we decided to make an all senior infield. Considering a lot of us were out of position I thought we did a very good job of competing against a decent opponent.”

Paly’s Baseball team will head to SCVALs on Tuesday. The time and date are to be determined.