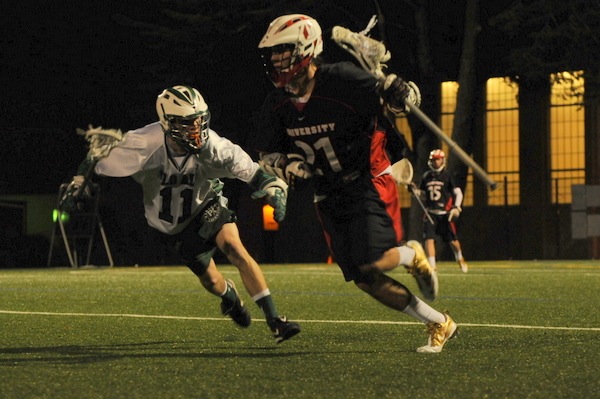 The Vikings are starting preseason games without key players middie Kris Hoglund (‘12) and attacker Bryan Keohane (‘11). Hoglund is healing a broken leg sustained earlier this year during the soccer season, and Keohane is recovering from meniscus surgery. Keohane will be out for the majority of the team’s season.

The Vikings had a bone to pick with University, who breezed by Paly last year by a score of 11-4.

Today, the game started up evenly matched with the first goal going to the Red Devils after four minutes of play. Paly was able to respond three minutes later when middie Walker Mees (’13) was able to put the Vikings on the scoreboard.

The rest of the quarter remained even, without either side clearly dominating. The Vikings were forced to play a man down for the final three minutes of the period when defender Cooper Levitan (’11) was given a penalty for an illegal check. However, Paly adjusted well and the first quarter ended with the two teams tied at 3 after attacker Zach Spain (’11) tied the score with 56 seconds on the clock. Spain had a total of three goals and one assist on the night.

The second quarter was the same back-and-forth play but by halftime University was able to scrape ahead by one goal, 7-6. The Vikings were not thrown off their game and continued strong offensive passing and tight defensive play.

Spain opened the second half with an assist from attacker Jonny Glazier (’13) to tie the score up once more, 7-7. Glazier had one assist and one goal on the night. University put the ball in the net once to take the lead in the third quarter, but played the majority of the period with two men in the penalty box.

With University up by one in the fourth quarter, Paly came out firing. The Vikings dominated the fourth quarter in what had been a fairly even game, although they did not score until three minutes of play remained.

At the three minute mark, Middie John Brunett (‘11) blew apart University defense, scoring three times before the period ended. Attacker Cory Valenti (‘11) added a goal of his own and with 29 seconds on the clock the Vikings led 11-8.

“Nothing changed [from the first three quarters to the fourth quarter],” Brunett said. “We kept the momentum up and we kept working. We just had to play our game.”

A final Red Devil effort was not enough, and the final score was 11-9 in Paly’s favor.

Paly head coach Craig Conover has faith that his team will go far this season and that this victory will set the tone for league play.

“This is the golden year for us,” Conover said. “We can do anything and beat anyone, and University is not just anyone. They are a very good team.”

The Vikings will play Los Gatos High School this Monday at 7:00 p.m. at Paly in their first league game.