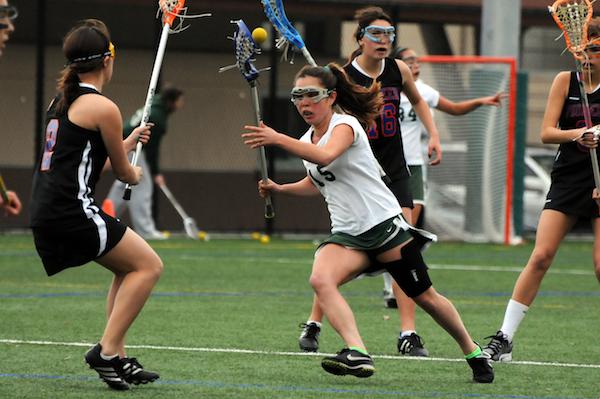 Emy Kelty (’12) drives past three Pioneer defenders towards the goal. The Lady Vikes won 10 to 5, bringing their SCVAL record to 3-0-0. [Brandon Dukovic]

The Lady Vikes (3-0-0 SCVAL) dominated the majority of the first half. Attack Kimmie Flather (’12) put the Vikes on the scoreboard early on. Flather had three goals on the night.

Paly continued strong offensive play in the first 25 minutes, moving the ball skillfully around Pioneer players. The Lady Vikes’ fast transition play kept the Mustangs at bay until late in the half. However, in a quick response to a goal scored by Paly midfielder Nina Kelty (’13) with 6:10 left on the clock, the Pioneer offense bolted down the field and put itself on the scoreboard to make the score 5-1. The Mustangs were able to hold the Lady Vikes for the remainder of the half while putting away two more goals for themselves, setting the score at 5-3.

“I think the half started off well but after we got up by a couple of goals we started to let our game drop,” Flather said. “We need to work on improving our play and looking for the open pass.”

The Lady Vikes started the second half off the same as the first, and within two minutes Kelty had added a goal from an eight-meter shot to bring the score to 6-3.

Two yellow cards were issued almost back-to-back, one to Paly’s defense Kirah Ingram (’12) for unsportsmanlike behavior, and the other shortly after to Pioneer’s Austin McLaggan (’12) for a dangerous shot. Both teams played down for two minutes during which no goals were scored.

The Lady Vikes found their rhythm about half way through the second half. Genevieve Lucas-Conwell (’13), Charlotte Biffar (’13) and Gracie Cain (’11) added a goal each within a span of three minutes. With the score at 9-3 in Paly’s favor with 9:22 remaining, the Mustangs pulled together to put away two more goals and with 27 seconds left, the score was 9-5.

“We were a little bit flat in our stick work but we did some really good things on transition – our spacing was really good on the field,”  Paly head coach Jamie Nesbitt said. “I think it was a very good team effort; I am happy with the win.”

Flather got to have the last word, ending the night with a goal in the last 17 seconds of the game.

“Towards the end we got really fired up again, and that is how we have to play for the whole game,” Flather said.

The team will face off against Saratoga High School this Thursday at 5:30 p.m. at Saratoga.

“The girls are still trying to figure it out,” Nesbitt said. “We need leaders to step up this season because of how many seniors we lost.”