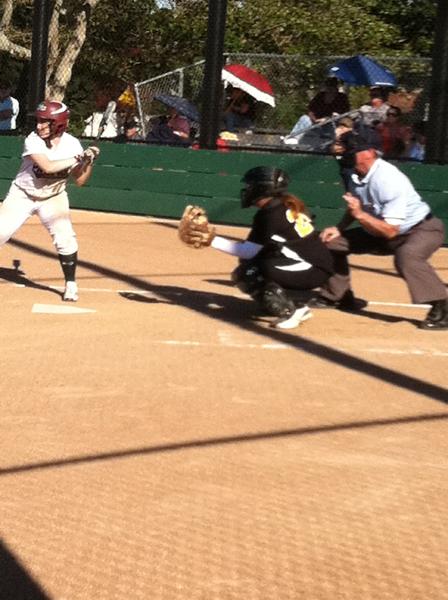 Mariah Philips ('11) bats during the bottom of the fourth inning. Philips stole two of the Vikings' six runs throughout the course of the game.

The Palo Alto High School softball team has synchronized with the weather: on March 31st in 80 degree weather, the Lady Vikes turned up the heat and scorched the Mountain View Spartans 6-0 in their second league win of the season. After a slow start in league play and a tough loss to Wilcox this past Tuesday, Paly proved themselves as a team with consistent defense and took full advantage of numerous Spartan errors, turning them into  scoring opportunities.

After a slow first three innings, the Lady Vikes rally in the bottom of the fourth and get runners on base. Mariah Philips (’11) was walked and proceeded to steal second and third base before rounding home on a fielding error. It was a close call, but the run counted and Paly went up 1-0.

Anderson, giving the base running commands, could hardly contain himself and joked with the umpire about his coaching style.

“Your ears ringing yet, blue?” he said.

The Vikings’ defense continued to be solid, as pitcher Grace Stafford (’11) struck out two and the Spartans only got one hit the entire game.  After Philips’ stolen run, Paly’s hitting game slowly started to gain momentum. Gracie Marshall (’11) stole home after being walked in the bottom of the fifth inning. Hannah Bundy (’14) was then hit with a pitch, and Philips was walked once again. The Lady Vikes capitalized on poor Mountain View pitching with smart base running, and both Philips and Bundy stole home for a 4-0 score.

Anderson knows that batting is an area of improvement for his team, but invests a great amount of faith in its defensive performance.

“We can still improve, especially in our hitting game but our defense is really sensational right now,” he said. ‘I’m really proud of the way we’re playing defense.”

Marshall also noticed this new energy in her teammates, as they did not fatigue as the game wore on.

“What has usually been the case is we come out really strong the first few innings and then we lose our momentum  and that’s what’s been crippling us in these past few games,” Marshall said “We improved as the game went on and there’s no doubt about it: we came ready to play.”

The Vikings held strong through the top of the seventh while adding two more runs in the bottom of the sixth. Marshall got on base by hitting a single and was driven home after stealing second by a double hit by Bundy. Paly had no defensive errors, and Marshall had numerous infield plays that prevented Mountain View runners from moving into scoring position.

Anderson fully recognizes the vital role that both these players have on the team, and hopes that all thirteen of his players will become stronger by the season’s end.

“All of them had a chance to play today which makes me feel good,” Anderson said.   “Bundy is such a good hitter, [and] Marshall, no question, she’s our leader and one of the top players in the league.”

The Lady Vikes travel to Homestead next Thursday, April 7th at 4 p.m.