Life in the fast lane – The Viking Magazine

Life in the fast lane 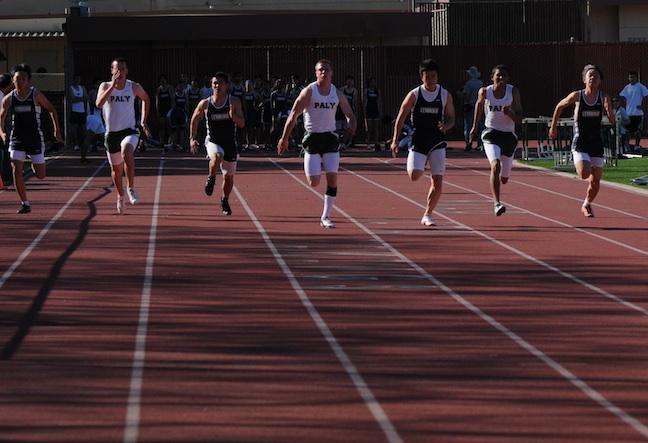 Picture a hurdle.  A barrier.  A blockade between the impossible and possible; an object separating the domains of failure and success, of champion and second best. Conquering a hurdle requires complete fearlessness, a burst of speed and a solid jump. Mastering these components is a challenge in itself, but each is critical to clearing the hurdle and progressing forward toward greatness.

The Palo Alto High School track team will never encounter these hurdles in an actual race. Yet the different challenges they face throughout the course of the season are seen as hurdles in their eyes. Each workout, race and meet are small challenges that, once overcome, will pave the way to achieving the goals for their season.

The general understanding on the Paly track is that the sprinters are the fastest, and the fastest win the big races. Fast also never hesitates when faced with an obstacle, no matter its magnitude. Fast has become an integral part of the mindset of these athletes. Driven by the need for speed and constant perseverance, Paly track has not only adopted fast as a mentality, but also as a lifestyle. Most people shy away from a fast-paced life. But the sprint teams understand and embrace its importance. Head coach Jason Fung invests a great amount of faith in his sprinters, depending on their wide range of talent and speed to win crucial meets.

“[The sprinters] are a majority of the team, so it helps with depth,” Fung said. “You score in big meets with more depth.”

The Paly track team has already faced its fair share of adversity this season. Last year, speed became synonymous with the Vikings, especially with runners Philip Macquitty (’10), Daniel Jones (’10), Emily Yeates (’10) and Erika Hoglund (’10) at the helm. With the class of 2010 now gone, Paly’s current sprinters are faced with the task of maintaining their level of speed. Fung recognizes the loss of such a gifted class of runners and their contributions to the Paly track program, especially Macquitty.

“Philip was a big asset,” Fung said. “Losing him was a big blow to the distance team.”

Though newer distance runners are beginning to show promise in their races, the team is lacking in overall depth, according to Fung. The boys’ team is also currently missing sprinters Miles Anderson (’11) due to illness, and Maurice Williams’ (’11) credits remain questionable. Despite these setbacks, Fung is now turning his attention towards his remaining sprinters, who have now stepped into the track spotlight. Using their diverse talent in a range of sprinting events, the boy sprinters lead the team as best they can, both in individual and relay events. Fung acknowledges their efforts, but also takes into account that the task of replacing Macquitty and Jones is not an easy one.

“You can only step up so much,” Fung said. “We have a good solid team overall, and [runners like] Tremaine Kirkman (‘12) have held their own.”

The girls’ team spans a full spectrum of experience level on the track: Runners are new to the sport, new to Paly or new to both. Basketball converts Sydney Davis (‘11) and Stephanie Allen(‘11) and newcomer Helen Butler (‘11) are looking to fill in the gaping hole left by Yeates and Hoglund. Pippa Raffel (‘14) has also proven herself to be a valuable asset to the team, according to veteran sprinter Lydia Guo (‘12). She remains confident that her newest teammates are capable of stepping up into their newest roles, and that team cohesiveness will come in time. 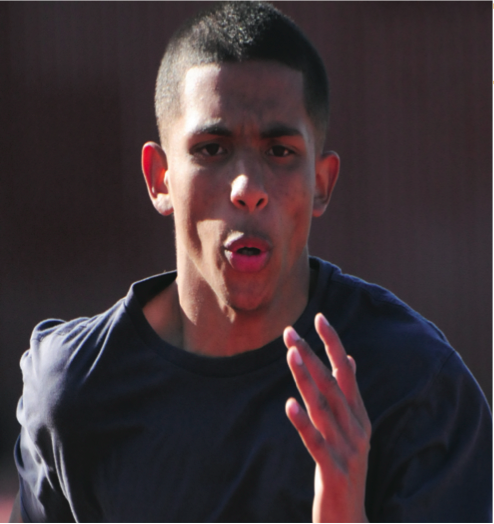 “Track is not respected at all,” Kirkman said. “For every serious athlete, there are people who are just doing it for a prep.” Photo by Anne Hildebrand.

“[We] are all really fast,” Guo said. “Once we are able to pull together our relays and work on technique we’ll be able to form a really strong team.”

Fung sees potentialin his girls’ sprint team and believes that their diverse talents will be put to good use throughout the course of the season.He also hopes that their races will make up for the lack of consistency in other events.

“The girls are very solid in the sprints,” Fung said. “It’s filling in all of the other holes when we start moving up in distances[where it gets to be a problem].”

Yet to an outsider, the magnitude ofthese athletes’ races seem inconsequential. At a school such as Paly, with two state championships and three Central Coast Section championships in the last five months, a first place finish in a league track meet seems somewhat miniscule. For this reason, the accomplishments of those who push their endurance to the limit while their spikes click rhythmically on the red clay are often overlooked. For the most part, the sprinters understand their lack of recognition, as the nature of their sport does not appeal to everyone.

“It’s not really a spectator sport,” Guo said. “In general I feel like we do get overlooked because it’s not as interesting to watch.”

Guo’s teammate Torie Nielsen (‘12) notes that track and field is not the only sport overlooked at Paly, since she feels that the school’s focus is usually oriented only towards mainstream sports. When asked if this affects her motivation to run, Nielsen simply shrugged her shoulders.

“What can you do?” Nielsen said. “We deal with it. Other sports don’t get as much coverage either.”

What frustrates serious members of the Paly sprint teams most is not the lack of recognition, but the fact that members of the sports community don’t take their sport seriously. As a no cut sport, track has gained a reputationfor being a team full of students who care only about getting out of P.E. While the varsity sprinters spend hours perfecting their technique and speed with various drills during practice, many “athletes” put no effort at all into these workouts, according to both Guo and Nielsen. Nielsen believes that this is the main reason why track has been labeled “easy” by less informed members of the athletic community.Kirkman is also frustrated with this trend and asserts that membersof the team who slack off duringworkouts undermine the intensityof track and sometimes prevent it from being valued as a serious sport.

“[Track is] not [respected] at all,” Kirkman said. “For every serious athlete, there are people who are just doing it for a prep.”

But there are still those who care. Each day, suiting up for grueling pyramid sets and weight room routines,the passionate track athletes are not affected by the torpid nature of their teammates. They appreciatetheir sport for the rewards it brings on a more personal level. Kirkmannotes that he does not do track to seek attention, but for personal accomplishment and enjoyment.

“I’m not looking for a spotlight, that’s more [for] football and basketball,” Kirkman said. “It’s [just] fun to do.”

Though Guo also is largely unaffectedby her sport’s lack of recognition,she never complains at the sight of an enthusiastic crowd, especially during bigger meets.

“It’s really great when peoplecome and watch during leagues and CCS because it’s an intense sport and is worth the attention.”

For the most part, however, only a few fans sparsely populate the stands. But the sprinters do not need a fan base to remain motivated: they have each other. Through their grueling routinesand exhaustingpyramid sprint sets, the sprinters have each other to lean on and often become closer as teammates duringthe toughest of the workouts. These relationships further develop off the track and greatly increase the track team’s overall cohesiveness. Nielsen notes that the relay teams becomeespecially close throughout the season, as each member of the team is working towards a common goal.

“[Our relay team is] really close,” Nielsen said. “Once we get a handoff right, it’s really gratifying and we’re brought closer together because of our victories and our failures.”

Comraderie is also prominent on the boys’ team. Kirkman laughs as he recalls the 4×100 team’s latestdecision on game day apparel.

“We match our swag: we’re workingon a speedsuit [and] haircutcombo right now,” he said.

For both Nielsen and Kirkman, however,the most rewarding aspect of track is the attitude and concentrated, devoted work ethic of their teammates. Kirkman especially appreciatesthe modesty of his fellow sprinters.

“We all show up and we’re ready to work everyday,” Kirkman said. “Nobody is super cocky; everyone is a part of the team.”

Nielsen admires these qualities in her own teammates, in addition to their ability to fully enjoy themselves out on the track. She smiles as she openly praises her teammates for their genuine effort and sportsmanship.

“I admire our hard work and abilityto have fun with it,” she said.

The Paly sprinters are fully aware that this season will be full of hurdles, but instead of giving up, they embrace the challenge. They are determined to embrace the fast mindset and continue its legacy. Each day after school, they dedicate mind and body to conquer the challenges required of them. With a traditionto uphold and a team to lead, the Paly sprinters are faced with a hurdle nearly too tall to jump over. But they sweat, work lots and complain little. They remain motivated, encouraging each as teammates and fellow athletes. They stay true to their goals and do what they do best: run like the wind.

Life in the fast lane