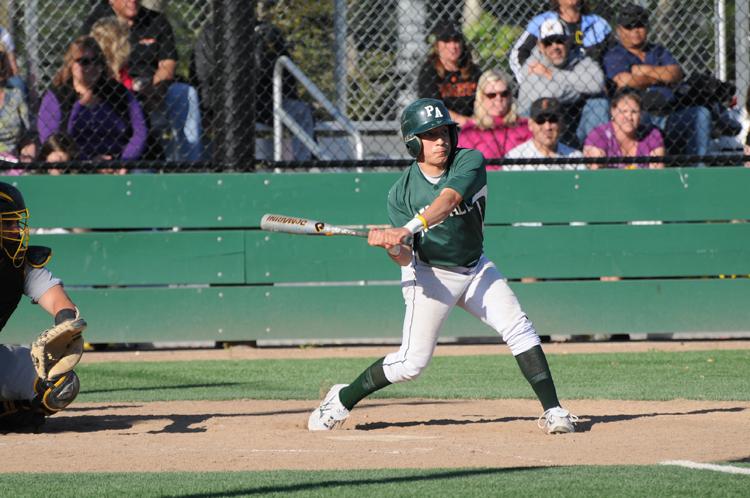 Jeff Cohen ('11) swings against Wilcox. The Vikings defeated the Chargers 10-1.

Jump to Comments
Share on Facebook
Share on Twitter
Share via Email
Print
The Palo Alto High School Varsity baseball team (23-9, 13-5) crushed Wilcox (25-5, 13-3) 10-1 to tie the SCVAL championship series up at 1-1 today.
The Vikings lost the first game of the three game series 10-8 on Tuesday.  Graham Marchant (’11) pitched a solid 7 innings and was backed up by strong hitting to give the Vikings the win.
“Our pitching and defense was really key in holding them to just 1 run and our offense produced throughout the entire game,” second baseman Jack Witte (’12) said. “Whenever we hold a team to 1 run, with our offense we should be able to win.”
Paly starting pitcher Kevin Kannapan (‘12) got off to a rocky start giving up a lead off single, then walking the next two hitters. Head Coach Erich Raich pulled Kannappan with the bases loaded and brought in Graham Marchant (‘11).
Marchant got Wilcox first baseman NickMorehead (‘11) to pop out for the first out of the inning. An error by center fielder BJ Boyd (‘12) gave Wilcox a 1-0 lead but Marchant  snuck out of the inning thanks to double play.

With the score 1-0, Paly opened up its scoring in the second with a two-run homer from John Dickerson (‘12) and an RBI from Christoph Bono (’11) to bring in Boyd.

The Vikings pulled away, scoring five runs in the fourth. The offense started when Ozzie Braff (’12) and TJ Braff (’11) were both hit by pitches the second of which brought in Boyd. Wilcox changed pitchers, but the Vikings continued their relentless offense when Braff and Bono were knocked in by Will Glazier (’11).

In the sixth Drake Swezey took a 0-2 fastball and crushed it over the wall in left for a solo shot.

“He threw me two curve balls so I knew he was going to throw me fastball,” Swezey said. “ When he did I let my swing take over.”

Although the offense provided the fireworks, the afternoon’s strongest performance came form Marchant. After relieving Kannappan in the first, Marchant pitched seven shut out innings, giving up just two hits.

“It felt great to step up in that type of situation and help out my team,” Marchant said. “The defense behind me made plays all over the field so I didn’t feel too much pressure. When you get a lead you really need to start pounding the zone so once the team put runs on the board my job got a lot easier.”

Catcher Will Glazier (‘11) saw Marchant’s performance as nothing short of clutch.

“He seized the opportunity when he got it and saved our season,” Glazier said. “[Graham] proved that every guy has a role to play.”

Looking ahead to game three, the Vikings believe that momentum will be on their side.

“We definitely have the momentum after today,” Swezey said. “If we can keep hitting like we have been over the last few games and if I can pitch well and hold them to a few runs we definitely have a good chance at winning tomorrow.”

The Vikings will fight for the league title in the final game of the series tomorrow at 3:30 at Wilcox.