Why Moneyball is flawed – The Viking Magazine

Why Moneyball is flawed 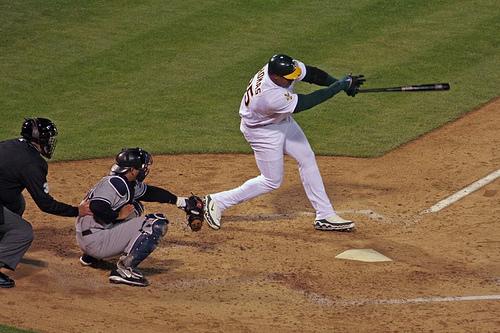 Frank Thomas hits his first home-run as an A against the New York Yankees on Opening Night in 2006. Thomas might just be the best investment in old and battered goods the A's have ever done. Photo used under Creative Commons from Ken Nakano.

As some of all you ‘avid’ readers out there may know, I am a Dodgers fan. No, I won’t pull a Brian Stow on anyone, that was completely and utterly horrific, but I can get into an argument about the Giants/Dodgers rivalry like the best of them. (See my rant about how Clayton Kershaw is better than Tim Lincecum in my Viking Tries article.)

Yet I’m not here to talk about how much better my boys in blue are going to do better next year, nor how badly the Gigantes will regret signing Beltran.

No, I’m here to talk about how much Moneyball has failed the Oakland Athletics.

Now hold on there, you may say. This is the movie with Brad Pitt! This is Billy Beane! This is the only reason why the A’s we’re even slightly good early on in the millennium! Hey, I just got extra credit for Sports Lit for watching that movie!

Hmmm…you have a valid point. However, ultimately, Moneyball failed the A’s. Watching the MLB playoffs and a certain leftfielder for the St. Louis Cardinals (I’ll get into more about my hatred later), got me thinking about the A’s’ predicament.

Because while many of you may know that I’m a Dodger’s fan, I’m fairly sure next to none of you know I’m an A’s fan. It’s not something I generally like to promote. It’s like rooting for someone who is playing against Aaron Zelinger (’12) in Risk. They’ll never win, and if they make any headway, it’s both a miracle and a fluke. But I’ve rooted for the green and gold, and blue and white simultaneously throughout my life.

Besides the fact that the Moneyball era, coincidentally or not so much (at all), happened to be the exact same era as the steroid era, there are a couple other main ideas that I’d like to address to (hopefully) convince you.

1. It started the A’s off on this never-ending journey of trading away their young stars and prospects for old veterans attempting to milk their last few years in the league.

Let’s look at the A’s rosters for the past 5 years, which puts us right at the end of the Moneyball era (2006) and right on the cusp of when the A’s started to get terrible. Using www.baseball-almanac.com, which seems to have been made for this exact purpose, I’ve found the list of A’s players that played the most games at each position for each year. I’ll conform it a bit here and there for names that I’m actually familiar with by adding people to “other.” (Unfortunately, Baseball-Almanac didn’t have information about this current season. Probably because it hasn’t ended. But, I’ll add in information about the 2011 season as I remember it without the data.)

So that’s that. Let’s go through general trends shall we?

That would mean we should probably start with 2006, the last time the A’s made the playoffs. And the last time the A’s actually had a satisfactory team. First off, let’s just put it out there that none (NONE) of the players listed are still playing for the A’s. Second, let’s look at why they may have won. It couldn’t have been that they paired a little bit of offense with a stellar bullpen, could it have been? No way….

Look at their offense. Swisher is now playing (and contributing might I add) for the Yankees, so we know he’s done well. Ellis and Chavez, while offensive liabilities (well Chavez was actually a 5-tool player, but since he was injured, I still group him here. Because as we all know, stats can never lie. Right), were Gold Glovers for some unreal number of consecutive years. So that’s fine. Kendall wasn’t a complete stiff. Thomas, as we’ll see later, was basically the only old-timer that paid off for the A’s. At age 39, he hit 39 jimmyjacks, which is actually impressive. Wow, that sounds weird coming out of my mouth (or out of the Logitech keyboard I’m writing this on I guess). An A that is impressive. That may be the first and only time I ever say that. Whatever.

Now look at their pitching. Zito was still good then, and Haren and Blanton were becoming the stars we now know them as. The A’s have always had a stellar pitching staff. Since 2006, the A’s have never been lower than 6th in team ERA for the AL (2006: 4th, 2007: 6th, 2008: 5th, 2009:3rd, 2010: 1st, 2011: 3rd). So the A’s have no shortage of star pitchers coming through the ranks. However, what ends up happening is that they trade away their up-and-comers in return for more prospects to fill the farm system. They then need to scramble and sign former stars who still want a taste of the glory, who simply can’t get the job done.

People that would fall under the this category?

So, back to the main point. Either the A’s can sign old veterans, or…

2.Stick with prospects that have “proven” themselves in the farm system who just can’t do diddly in the bigs, or trade away prospects before they can help us out.

But don’t you worry! I’ll get into #2 next week, and rest assured, I’ll have another long list of players that will take up most of the screen again!

Why Moneyball is flawed