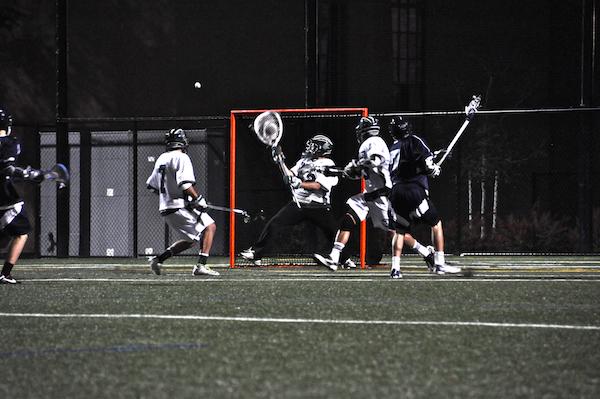 The Palo Alto High School boys’ lacrosse team fell to Bellarmine College Prep. 11-8 this Friday night at Paly. Although the Vikings were able to keep up in the first half, the Bells pulled away in the third quarter largely in part to unforced errors (18 on the night) from Paly and early fourth quarter comeback efforts from the Vikings proved to be too little too late.

“They [Bellarmine] were coming up with everything,” Paly Head Coach Craig Conover said. “And when we had the ball, they somehow came up with it. I don’t know how that was happening.”

Straight off the bat Bellarmine had the first goal on the scoreboard for the night. This lead was quickly denied as Paly’s Kris Hoglund (’12) and Jonny Glazier (’13) found the back of the Bellarmine goal. The Vikings maintained this lead despite Bellarmine’s offensive efforts throughout most of the first quarter. However, Bellarmine was able to tie up the match 2-2 with a few minutes remaining.

To open the second quarter Glazier came out firing. He found an opening in Bellarmine defense and whizzed the ball past the goalie. To follow Glazier’s lead, William Hare (’14) scored his first goal of the night with an assist from Jordan Gans (’14) gaining a 4-2 lead for Paly in the very first minutes of play.

Bellarmine rallied against the two goals and were on the offensive for the majority of the quarter with little success. Strong and steady play from Paly’s Andrew Kouchekey (’13) in goal kept out the many attempts of the Bells until finally, with 3:20 left in the quarter, a shot flew by Kouchekey putting Bellarmine within one of the Vikings going into the second half.

The second half was an entirely different game than the first. In the third quarter, the Bells shut out the Vikings for the entire period, and capitalized offensively, scoring five goals in the course of 12 minutes.

“I think we did pretty good the first half, we just broke down in the second,” Matt Lam (’12) said. “We didn’t hustle as much and we didn’t take advantages of our opportunities.”

Bellarmine’s driving force was #15 who had two goals in the third quarter and four on the night.

Paly made a desperate comeback attempt in the fourth quarter. Lam scored off a drive to the goal and shot within the first 40 seconds of the quarter and in the next 40 had assisted Skyler Anderson (’13) to score his first goal of the night putting the Vikings within a two goal range, 6-8.

Bellarmine quickly widened the gap however, with a response from #15. Glazier fought back, scoring his third and final goal of the night. But Glazier’s efforts were not enough, and after two successive goals from the Bells. Hoglund’s closing goal of the night put the final score at 11-8, Bellarmine.

“They saw a weakness in our defense and just started exploding it,” Conover said. “They were just cutting top side and throwing the ball from behind.”

The Vikings are coming off of a hard week of conditioning and a difficult 10-8 loss against Sacred Heart Prep. The team plays its next league games against Menlo-Atherton and Menlo next week.