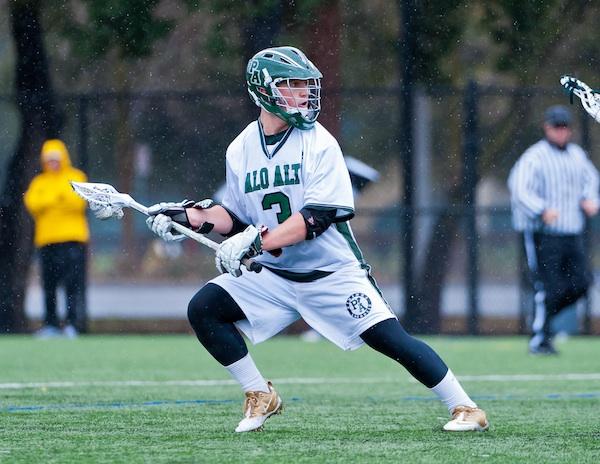 Senior captain Kris Hoglund ('12) steps in for a shot. Hoglund will be playing Division III lacrosse at Tufts University next year.

In the history of sports, there have been some incredibly heated and fervently debated rivalries. Red Sox vs. Yankees, Duke vs. North Carolina, and Barcelona vs. Real Madrid to name a few. However, that leaves the question of what makes a rivalry great? Many factors play into the situation, though one constant remains: it is nearly impossible to discern the superior side in nearly all hotly contested rivalries.

When it comes to lacrosse, there is simply no debate nor rivalry to be had between boys’ and girls’ lacrosse due to the girls’ game’s toned down skill, absence of any form of physicality and mind-boggling rule changes.
In the girls’ game, the shallow pocketed sticks prevent quick stick tricks and intricate dodges, as opposed to the boys’ stick which allows for moves such as the toe drag and fake pass. In addition to the dodging and tricks, the absence of a pocket makes it so that shots barely rub up against the 80 miles per hour mark, whereas in the boys game, shots frequently nestle up against the 100 mph threshold.

When one looks at the boys’ game, the brutal body checks and numbing stick checks add an element of physicality which is simply absent in the girls’ game. The absence of any form of physical contact results in a less skilled and less interesting sport for both players and spectators.

Finally, rules such as those which prevents one from shooting through a defender completely undermine of the validity of girls’ lacrosse as a sport. The notion that one can’t run through a defender nor take a shot over or through them, makes girls’ lacrosse seem to be a watered down imitator of boys lacrosse, similar to what G2 is to Gatorade.
What it really comes down to is the accommodations made for the girls’ game. While I recognize that certain concessions need to be made due to the physical disparity between boys and girls, but the girls’ game has become shallow and vapid due to the overractionary changes made.
Say what you may about the preppy culture and vibe around the sport, but boys’ lacrosse is an infinitely superior game than girls’ lacrosse in every way, shape and form.
Girls Got it Great
by Nina Kelty
Composure, skill, patience, and teamwork these are the traits that create the foundation upon which girls’ lacrosse is built, contrasting with the selfish and egotistical play of boys’ lacrosse.  Many people jump to the conclusion that we shouldn’t be respected as athletes because girls’ lacrosse is technically not a “contact” sport.

Since brute force cannot be used like in boys’ lacrosse, agility, speed and explosive movements are essential to the girls’ game.  Also, deeper pockets on boys’ sticks allow them to control the ball through contact.  Meanwhile, we have shallower pockets and minimal protective gear, making it impossible to check like the boys, forcing us to play a game based upon finesse and teamwork.

Due to the rules in girls’ lacrosse we are forced to look for passing options in order to find an open scoring opportunity.  To score, we must run plays that move the ball quickly enough to catch the defense off-guard.

As a result, we encourage everybody to score, allowing us to distribute our stats throughout the roster.  This kind of teamwork and selflessness contrasts drastically with the ball-hogging cockiness and brutal hitting in boys’ lacrosse.

On the offensive end, boys’ lacrosse turns into a one-man-show that takes the team element away from the sport.  Players consistently drive to the goal blindly flinging the ball through defenders, hoping their sheer power will allow them to score a goal.

When watching a Paly boys’ lacrosse game, I saw players taking one shot after another, one of whom missed the goal eight times in a row.  So far this season, two players account for 46% of their goals.  Any player with this kind of ball hogging mentality wouldn’t last one game on a girls’ team.

Although boys’ lacrosse must be respected for the power and strength it takes to be a good player, it also breeds selfishness and demands less skill than girls’ lacrosse.  Therefore, I would just like some respect from my peers for the composure, skill, patience and teamwork required by me and my teammates.