The elements of chemistry – The Viking Magazine

The elements of chemistry 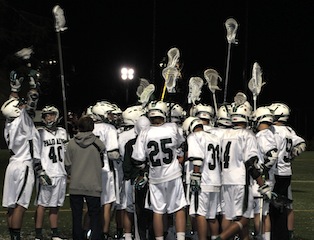 The boys' lacrosse team huddles up at halftime during their game against Woodside High School. The team has pasta feeds before games and also has special "Paly Lacrosse" wristbands to help unite the players.

At a lacrosse practice last spring, Walker Mees (‘13) watched as two of his teammates hacked at each other with their lacrosse sticks – at first just aggressive play. The checks escalated into hard hits and a later, a full on fistfight. The other players just stared at their so-called teammates and let the fighting carry on before the coach stepped in.

“[The incident] actually brought some of us closer together because we could joke about how ridiculous it was that our own teammates were fighting,” Mees said.

Selflessness and dedication to the team are just as, if not more important than talent. Can this chemistry be manufactured or does it just happen naturally?

In the case of girls’ water polo, the team’s chemistry was created over time and required proactive efforts by the captains in order to unite the team. The captains led team building activities such as bonfires and movie nights which helped the girls connect better in the pool. While pasta feeds can bolster a team’s chemistry, experience and the development of trust in one’s teammates also can have a large impact team chemistry.

“Having that experience that you build over high school seasons helps you really get to know the other players and you start to mesh as a team,” girls’ water polo team captain Skylar Dorosin (‘12) said.

The boys’ lacrosse team had to go a long way to regain their team unity. This year’s team captains have organized more pasta feeds and have given the boys wristbands.

During this year’s lacrosse season, if the boys are not wearing their “paly lacrosse” wristbands at school, their teammates get to decide their punishment ranging from wearing a skirt to practice to singing in front of the entire team. Even something as small as a wristband can serve to unite a team and create a bond that can be translated into success on the field.

“This year everyone really likes being at practice and getting the opportunity to play,” Mees said. “We all really want to win the league championship and we really like playing together.”

Fun team building activities are not out of the ordinary in the Paly athletic community. It’s not uncommon to see a team having lunch on the quad or players dressed up in crazy outfits — the girls’ lacrosse team dresses in preppy attire when they play private schools and the boys’ basketball team always wears suits and ties on game days.

Team dinners before games also fire up the collaborative mindset. This year teams are getting creative about how to incorporate new players — the girls’ lacrosse organized a Santa Cruz getaway for the whole team at the beginning of the season.

Team sports involve players spending ten or more hours together each week and when players bond off the field, they become more comfortable playing together as a teammates. Sports also allow students to relieve the school stresses and other pressures the face. But, it can go too far when players bring their external issues and emotions to practice.

“Last year when people let their issues into the pool, it created an awkward practice situation which affected games,” Dorosin said.

But this year’s team dinners seemed to pay off in an improved 9-4 league record for this year.

Another element to team chemistry is dedication to the team and confidence that one’s teammates will be able to carry out their individual jobs on the field.

During the 2011 state championship volleyball game, the lady Vikes staged an impressive comeback after being down 7-13 against the Marymount High School Sailors. It all came down to the faith that the girls had in their teammates.

“Everyone works so hard and you know that everyone wants it just as badly as you which makes you want to push harder yourself so that you can win for your whole team,” libero Shelby Knowles (‘13) said.

The girls developed this confidence in each other over the course of three years two of which ended in state championships. The team’s coach recognized how important strong team chemistry was at the start of the season.

“Our coach would say that when we would step into practice that we had to go through this imaginary shower that would clear drama and all other problems so that we could focus on volleyball,” Knowles said.  “He was a drama free coach that wanted us all to get along.”

At Paly, the combination of selflessness and leadership have proved to be the main components in state championship wins. 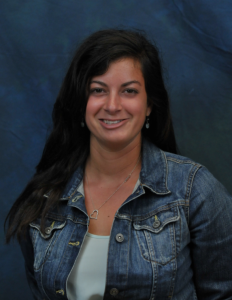 The elements of chemistry