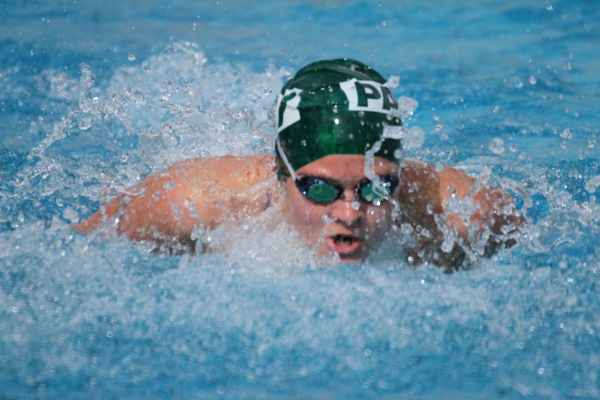 Margaret Wenslau ('12) swam the last leg in the 200yd freestyle relay in the CCS championship finals. The group finished second to Gunn's A team with a time of 1:37.03. Photo by Scotty Bara

Bellarmine won the boys’ competition with 389.5 points over Paly’s 218, extending their CCS win streak to 28 years, while Gunn won the girls’ competition with 266 points, ahead of second place Archbishop Mitty’s 242 and Paly’s 173.

“The way they carried themselves all day, to be proud to be a part of the Paly team, it just made my heart warm inside,” head coach Danny Dye said. “I was so happy and so loose that it was just a fantastic day all around.”

“The CCS meet is always unbelievably fast,” Sacred Heart head coach Kevin Morris told the San Jose Mercury News yesterday. “Every year you’re thinking, ‘How can this meet get faster?’ And every year it does.”

The Paly girls started out the day slow though with a 1:50.72 seventh place finish in the 200yd medley relay from A team Katrina Nguyen (’14), Laura Cui (’12), Margaret Wenzlau (’12) and Molly Zebker (’13). However, Tosky quickly turned up the heat with a blistering swim of 1:43.26 in the 200yd freestyle, breaking her own 2010 CCS record and over five seconds faster than the second place finisher from Willow Glen. 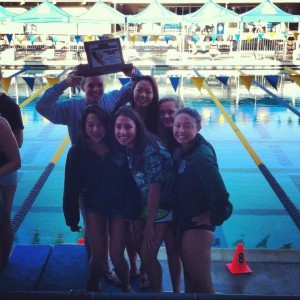 Members of the girls' varsity swim team pose with their third-place plaque from the 2012 CCS championships. The team will graduate nine seniors, along with one diver.

The girls failed to make the top eight swimmers in the 200yd individual medley, the 100yd backstroke, 100yd breaststroke, the 50yd or 100yd freestyle, but Tosky again took a comfortable win in the 100yd butterfly race with 52.36, over two seconds faster than the second place finisher from Mitty. The Lady Vikes also picked up the pace in the 200yd freestyle relay, with A team Tosky, Shannon Scheel (’12), Jayna Wittenbrink (’14) and Wenzlau taking second to Gunn’s A team with a time of 1:37.03. They finished the day with a third place finish from Tosky, Wittenbrink, Haley Mortenson (’13) and Zebker (3:27.79) in the 400yd freestyle relay.

This year’s team had the potential to win CCS after placing second in the past three years, but will also be graduating ten seniors this year. Next year, Mortenson, Zebker, Nguyen and Wittenbrink will remain some of the stronger figures on the team.

The boys had a strong showing too, starting off the day with a second place finish to Bellarmine in the 200yd medley relay with A team Alex Francis (’13), Sanborn, Andrew Liang (’14) and William Lee (’14) swimming 1:34.26. After Paly missed out on the 200yd freestyle top eight, Sanborn continued his streak finishing second to Ogren of St. Francis in the 200yd individual medley, swimming 1:49.44.

Liang also gave Bellarmine’s Mitch Hamilton (’12) a tough race in the 50yd freestyle, swimming a 20.92, just 00.05 behind Hamilton and making Liang the first Viking swimmer to break 21 seconds in the 50yd free. He kept the momentum in the 100yd butterfly, finishing second again with 48.15, and broke Paly records in both the 50yd free and fly.

The boys’ team will graduate eight seniors this year, but will leave the team in the sure hands of Kiris, Liang, Lee and Francis, among others.

“I’m really proud of all our divers,” said diving co-captain Miller. “The competition was fierce this year – there were 51 girls today. Nadya, Serena and I made first cuts which was excellent, and Phoebe [So (’14)] dove incredibly; she drilled a reverse one and a half for sixes that she learned in literally a few days, Nadya and Serena both threw back doubles, Serena threw a reverse double which is really impressive, and I competed my first front 2 1/2.”

With Nee and Yee taking over along with So next year, the diving team will remain strong as all of the divers continue to mature and learn new skills.

“I was proud of the kids,” Dye said. “I think they did a great job, and it just goes to show that we’re one of the top teams in the area. They all did such a great job of swimming hard and supporting each other and representing their school and their team.”

As for season records, this year was a phenomenal year for the boys, going undefeated all season, and for the girls, going 5-1 (losing to Gunn in one of the tightest league meets of the season), in addition to SCVAL championship wins. And although Paly will graduate so many seniors, Dye isn’t worried about next year.

“In the previous seasons each year they show what it means to be a part of a Palo Alto family and it allows the tradition to pass on,” Dye said. “This year was another great year to do that, and that even though you graduate you see another part of the family. Just looking back at the season I was proud of every one of them.”