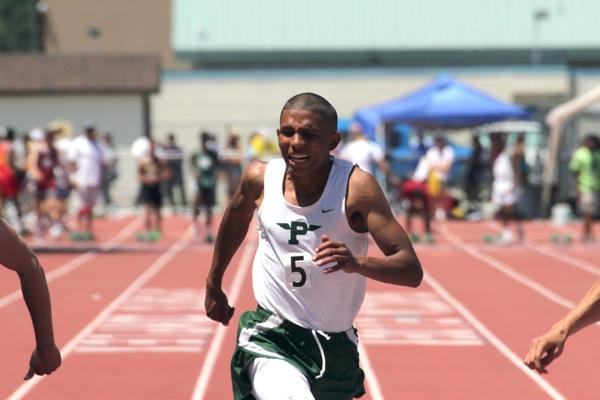 Tremaine Kirkman (’12) breezes to a seventh place finish in the 100 meter dash. His time of 11.03 gave him the second to last qualifying spot for the finals.

Paly has qualified 10 athletes for the Central Coast Section (CCS) Championship finals at today’s CCS semifinal meet in Gilroy. In the running disciplines, the winner of each heat advances, as well as those with the next four fastest times. In the field events, the top eight scores qualify for the finals.

In the boys’ field events, Victor Du (’13) showed a strong jumping presence, finishing seventh and qualifying for the finals in both the long jump (21 feet and 0.5 inches) and high jump (6’3”). Eilon Tzur (’13) took  10th in the triple jump, with a distance of 43’6.5”. Paly did not qualify any boys in the throwing events for the CCS finals.

For the girls on the other hand, Lindsay Black (’12) took an overall solid third in the shot put, throwing 39’0.5”, and Anna Dukovic (’14) shared sixth place with two other girls who jumped 5’1” in the high jump.

The complete results for today’s competitions may be found at the CCS semifinal results page.