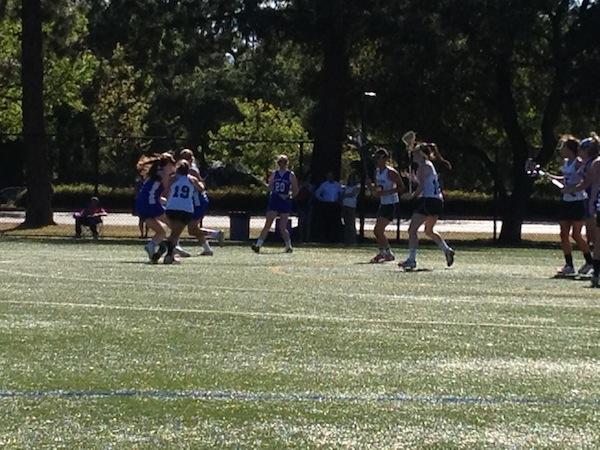 In one of its most anticipated games of its season, the Paly girls’ lacrosse team recorded their first loss of the season to the St. Ignatius Wildcats, 19-10.

“I think we could have played a better game and played them more evenly than we did,” head coach Jamie Nesbitt said. “[We need to be able to] bounce back and make adjustments in the game.”

With Paly goalie Emma Beckstrom (’13) sidelined with an injury, St. Ignatius immediately took control of the game by scoring two quick goals in the first five minutes of the game.

However, the Lady Vikes hoped to start gaining momentum minutes later as midfielder Allie Peery (’15) scored the first of her three goals on the day off of a long Viking possession.

In the next few minutes, the Wildcats went on to score two of seven goals off of penalties, widening their lead to 4-1. But off the ensuing faceoff, Paly midfielder Nina Kelty (’13) drove all the way downfield to the goal, bringing the score to 4-2.

After another goal by the Wildcats, the first half wound down to an end, with many missed ground balls and dropped passes. However, the stalemate between St. Ignatius and Paly continued as both the Wildcats and Paly’s attackers Ami Drez (’14) and Genevieve Lucas-Conwell (’13) scored another two quick goals to have a half time score of 7-4.

As the second half commenced, St. Ignatius scored three goals in a row giving them a six-goal lead. After another two goals from Peery, the Wildcats continued to dominate offensively as they scored twice more.

As Paly struggled in their 12-6 deficit, Lucas-Conwell, midfielder Charlotte Biffar (’13) and defender Julia Farino (’13) all scored consecutively, allowing Paly to close the game to a three-point difference.

But just as Paly gained momentum, the Wildcats outscored the Lady Vikes 9-1 during the rest of the second half, resulting in a rough 19-10 loss.

Looking back on their performance, many of the Lady Vikes felt that not practicing over the entirety of Spring Break was responsible for the big loss. With two goals on the night, Biffar said there was room for improvement.

“As a team, we just need to work on bringing the fire and the heart to every game and wanting it more than they want it,” she said. “We have a lot of things to clean up in practice. I think we know what to do, now we just have to go do it.”

“We could have done better,” midfielder Kristen DeStefano (’14) said. “We could have connected on our passes better and we weren’t really on top of it.”

Echoing her players’ thoughts, Nesbitt thought that the team’s level of performance was off, playing against one of the premier teams in the state.

“I think it was a pace of game we haven’t seen in a while,” Nesbitt said. “Obviously not having played in a week and a half, it does factor in, coming off of Spring Break recently. I think it was just having to go high intensity from whistle to whistle; it’s not something we’re used to and maybe we didn’t do a good job preparing for it in practice.”

The Lady Vikes will take on the Sequoia Cherokees tomorrow at 6:00 p.m.