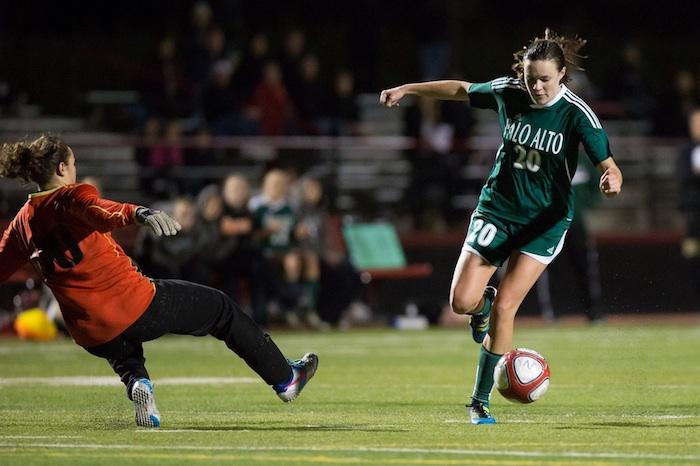 Female Underclassmen of the year Megan Tall drive to the goal.

“I was that kid that played every sport,” Megan Tall (‘14)  said, speaking of her childhood, “I played softball and basketball but… I’m more talented with my feet.”

“Talented with her feet” is one way to put it. Tall has played varsity soccer and run track since sophomore year– two big feats for what was an underclassman swimming in a pond of upperclassman big fish. In 2012, she set the league record for the JV 200 meter dash. Now a rising senior, Tall has made a name for herself both on the soccer field and track. For these accomplishments Tall is a worthy recipient of the Upperclassman Athlete of the Year award.

This past soccer season, Tall recorded 24 points in goals and assists to her teammates, including the game-winning goal over Gunn when she dribbled around Gunn goalie and fellow Stanford Soccer Club teammate Adriana Noronha (`14) for a 1-0 Paly triumph. Averaging .9 goals per game, Tall proved herself a valuable asset to the team as a midfielder and part time forward.

Through most of the season, Tall played right outside forward or midfielder in front of teammate and peer Julia Kwasnick (`14). Kwasnick further emphasized Tall’s value to the team.

“She was always a really consistent and positive player to work with.  She improved a lot over the season and actually became one of our top goal scorers,” Kwasnick said.

Looking back, Tall finds herself thinking more of the experiences with her teammates than of the number of goals she was able to rack up.

“Soccer season this year was by far my favorite for high school season because our team was really close,” Tall said. “We were a really good group of girls…We really committed to soccer this year, went really far and kind of proved people wrong because people weren’t expecting us to be very good…we kind of gained a little respect back for soccer as a sport at Paly.”

Ending their 2011-2012 season with a 2-8-2 league record, the girls’ soccer team was forced to drop down to the SVAL El Camino league. Then, suffering a hard and abrupt end to their season this past January, the girls’ had to forfeit multiple games and a CCS tournament game due to player ineligibility.

“We were a really close soccer team so it just helped that we were behind each other for everything so we tried to improve as a team and we were always supportive of each other so it helped a lot, and made it better,” Tall said.

Looking even farther back, Tall attributes her active upbringing to her family and friends.

“My family is really athletic, they’ve always encouraged me to do sports and they tell me that I can do whatever sport I want. They’ve been really supportive that way. Also most of my friends are athletic so I’m just around it a lot,” Tall said, “I think its always good to play a sport at least sometime in your life because…you’ll get in shape and you make friends for the rest of  your life so thats always a good thing.”

Growing as a player, Tall began to focus her attention on soccer, playing on club teams and traveling to tournaments. Coming into high school, another sport caught her eye.

“I didn’t start track until high school but it was through soccer that I found out I was speedy and then it led me to track,” Tall said. “[It] has been really fun. I just have to try and improve myself each time, and it’s just a fun team sport as well even though it doesn’t really seem like [a team sport].”

Track coach Jason Fung agrees with Megan’s talent and contributions to the team.

“She’s a very important piece of our team,” Fung said. ”She’s taken track a little more seriously this year and has kind of reaped the benefits from all the success she’s been having.” Fung said. “She does a lot outside of school but she’s always at practice, she always does her part to keep everything going.”

As Tall transitions into her final season, she looks forward to playing soccer and

“Individually I just want to get more personal records and go to CCS next year [for track],” she said, “And I really want to show the league that we can beat the other [soccer] teams and go far next year.”

And throughout all of this, Tall keeps a simple phrase in her head: “If you’re not giving it 100 percent you probably shouldn’t be doing it.” <<<