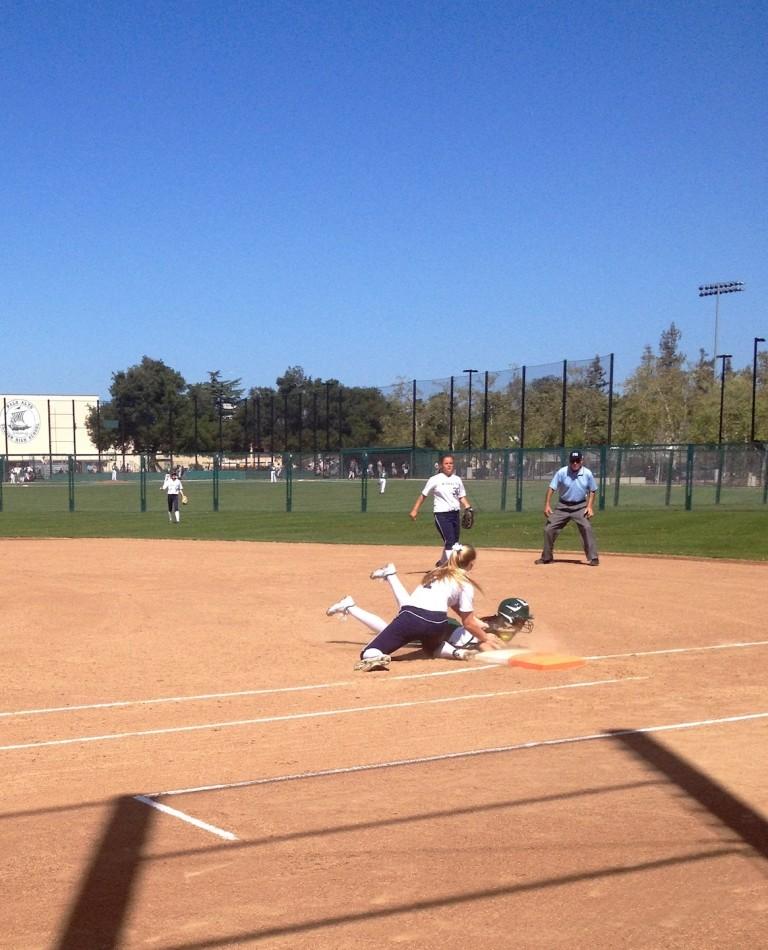 Casey Glassford ('15) tries to slide back to first, after attempting to steal second. She was out.

The Lady Vikes annihilated the King’s Academy Knights in a 10-0 victory, with pitcher Julia Saul (‘14) throwing a three-hit shutout. The game ended in the sixth inning due to the mercy rule.

The Vikings took a longer warm-up then it has in the past, and co-captain Hannah Bundy (‘14) believes it helped them pull out a victory.

“We had a two hour warm-up this morning, which is different for us,” Bundy said. “We really worked on hitting and it really showed this game.”

Coach Bill Laskey was proud of the score and of the team’s play.

“When you win 10 to nothing you are pretty happy with the whole routine,” Laskey said. “Julia Saul pitched very well. Casey Glassford hit a couple of nice hits.”

Paly started the game strong as Saul struck out King’s Academy’s first batter. In the second inning, Bundy stole home off a wild pitch, giving the Vikings the 1-0 lead. Later in the inning, first-baseman Emma Noroian (‘14) batted pinch-runner Autumn Macareno (‘15) in to make the score 2-0.

The Lady Vikes played strong offense; however the team was unable to score again until the fourth inning, when Bundy scored off a hit by Noroian. The King’s Academy first-baseman was unable to hold onto the ball, allowing Norian to get to second and Bundy to score.

It was not until the sixth inning, when the Vikings really pulled ahead and won the game. Leading into the sixth inning, the score read 3-0. Bundy started off the streak of seven runs, by stealing home off a wild pitch.

Shortly after her, pinch runner Autumn Macareno (‘15) made it home. In the next play Shannon fee (‘14) got a run by stealing home. Three other Lady Vikes made it home before the game was declared over due to the mercy rule. The mercy rule applies if there is a ten-run gap between the teams after the fifth inning.

Although Laskey was happy with the result, he already has his eyes fixed on the future.

The Vikings will play their next league game on Monday against San Mateo High School at 4:00 p.m. at Palo Alto High School.