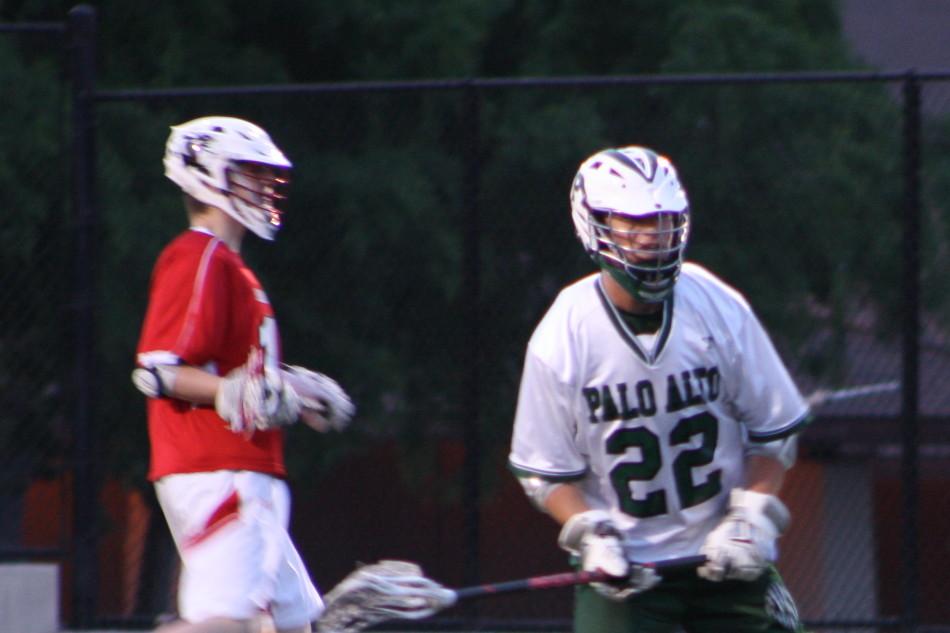 Jason Trisler ('14) takes on the ball. The Vikings went on to beat Burlingame High School, 15-1.

“We were real pissed off about this past Tuesday against Sacred Heart,” coach DJ Shelton said. “We were inspired and wanted to come out and show everyone what we’re capable of. The guys were working really hard on the field; Matt Seligson, Q [Quintin] Valenti, everyone’s just really stepping up and playing to the best of their ability.”

The Vikings started off powerfully, with continued attacks on the Panthers’ goal. At the end of the first quarter, Paly lead the game 5-0.

Winning the face-off, Jordan Gans (’14) quickly pushed the ball forward and the team continued its possession. Although Burlingame had many shots on goal throughout the quarter, they were quickly thwarted by goalie Quintin Valenti (’16). Continued pressure on the goal brought up Paly’s strong lead to 6-0 with s successful shot by Matt Seligson (’16). As the Vikings scored an eighth goal, Burlingame called a time-out with six minutes 13 seconds left on the clock.

Emerging from the huddle, Burlingame’s attempts on goal proved more persistent. With the ball continually in Paly’s half for two minutes, the ball hit the back of the net as Burlingame put a point on the scoreboard. The Vikings quickly retaliated with a goal by Drew Chalmers (’14), bringing the score to 9-1. The boys ended the half with a 10-1 lead.

“[We need to work on] offense, moving the ball faster, and passing maybe,” captain Gans said. “We played really hard, so we scored a lot.”

Going into the third quarter, Gans scored the first goal of the second half. As Burlingame gained possession, defender James Harrison (’14) recovered the ball and made a quick pass to Andrew Choi (’14) that brought back Paly’s control and brought up the score to 12-1. A yellow flag was thrown on a foul play against Seligson, and he was able to sink in Paly’s thirteenth goal. The Vikings exited the third quarter with a 13-1 lead. In the fourth quarter, the Vikings went on to score two more goals.

“I think the couple losses that we’ve gotten have taught us some things,” Shelton said. “The last game of the season, against Sacred Heart on our senior night, will really be the final test.”

The team will take on league opponent Los Alto next Thursday.