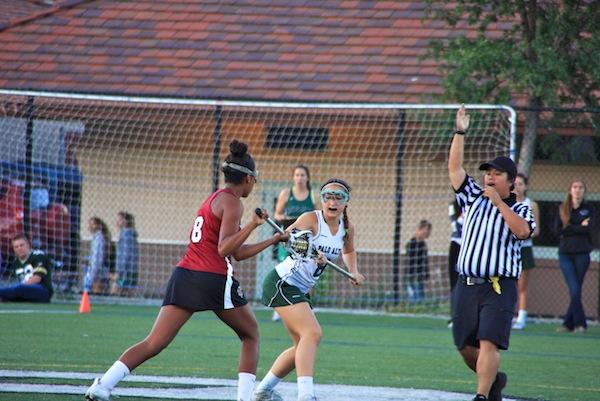 Maya Benatar ('16) prepares for the draw. The Vikings lost 20-15 against the Sacred Heart Gators.

The Palo Alto girls’ lacrosse team fell to the Sacred Heart Gators 20-15 on Wednesday night. Despite the loss, coach Jamie Nesbitt feels that the team tried its best.

“I think it went really well, I’m really proud of how the girls played. I think they left it all on the field and competed against a really good team,” Nesbitt said.

The Vikings started off the game strong after Allie Peery (‘15) scored the first goal of the game following the initial draw. However, the Gators countered and were able to score three consecutive goals. Following two blocks by Vikings goalie Meredith Kinnaman (‘16), Peery was able to score two more goals.

The second half started off strong for the Vikings with Paige Bara (‘15) scoring her first goal of the night during the first play of the half. The momentum continued and Drez was able to score her third and final goal of the night. The Gators found the back of the net for their first goal of the second half, but the Vikings returned with Benatar scoring her second goal of the game. Following a block from Kinnaman, the Gators countered and were able to score three more consecutive goals.

Peery agrees with Nesbitt and thinks her team gave it their all against the Gators despite the loss.

“Overall we just hustled really hard in that game, even leading up to it for a really long time. We all knew it was going to be hard,” Peery said. “In the second half we had a hard time keeping possession and winning the draws and it was really tough, they have a lot of great players that can handle the ball, go both ways, and it was a very hard fought game but we did the best that we could”.

The Lady Vikes will play next against the Mountain View High School on Friday, April