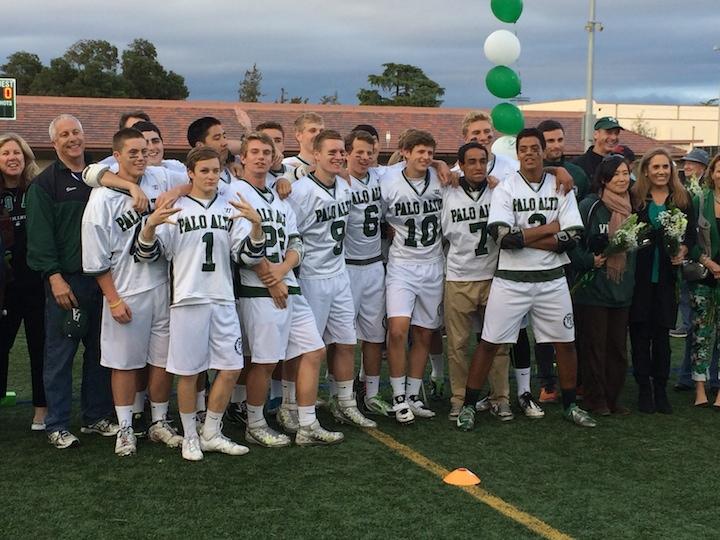 In a game that was closer than expected by many, the Palo Alto High School boys’ lacrosse team pulled out the upset victory against Sacred Heart Prep, 11-9. On a night that was about the graduating class of 2014, it was the departing seniors that ultimately played the biggest role in handing SHP their first league loss of the season.

The Vikings had been preparing for this match all season along, according to Coach DJ Shelton.

“Literally since the schedule came out, we have had our sights on this…this past week everyone came together,” Shelton said. “Because it was Senior Night, all of that emotion came bubbling up and you can’t beat guys who are playing for everyone around them.”

The tone was set early on when Tully McCalister (’14) cut inside the crease and scored a quick bounce shot within the first thirty seconds. The physical nature of the game was established when McCalister was slashed from behind, causing him to push back against his defender. Peyton Dwight (’14) and Matt Seligson (’16) both scored goals before Sacred Heart scored, taking the score to 3-1

Jordan Gans (’14) then scored his first of five goals, running at the SHP defense before finishing into the corner and increasing the score to 4-1. Before the end of the first quarter, there was a controversial play. McCalister seemed to shoot the ball through a hole in the top left hand corner of the SHP goal. Despite persistent appeals from the Viking’s sidelines, the ghost goal was not given by the referees.

The second quarter started in the same vein as the first, with McCalister scoring again to take the score to 5-1. It was an ominous sign of things to come from Paly when Gans hit the pipe of the goal, as the pressure started to mount on Sacred Heart.

Sacred Heart scored twice again in the second quarter after Gans scored another two goals to take the score up to 7-3.

Due to the increasingly physical nature of the game, by the fourth quarter, the Viking defense seemed to tire out. As a result, Sacred Heart scored four times, leading to a nervous finale for the home team.

Despite this, the Vikings won the game 11-9 and many thought it was the best win of the year so far.

“It means so much to everyone,” Gans said. “All the seniors are playing tonight…this is their last season, so it means a lot to everyone.”

The Vikings next game is in the Santa Clara Valley Athletic League (SCVAL) quarterfinals at home, next Monday.