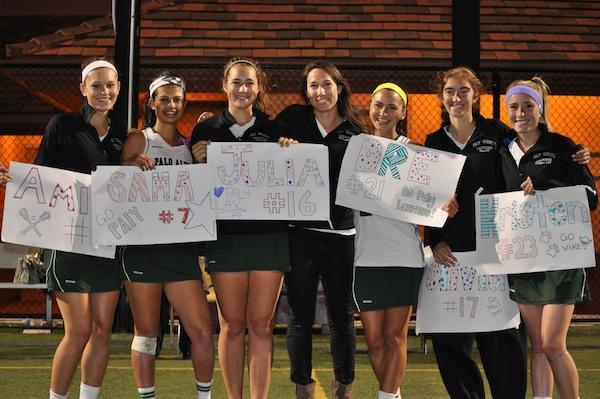 On Friday Night, the Paly girls’ lacrosse team honored its seniors in one of their last home games of the season as they triumphed over Los Gatos 16-8.

“I think we did really well, it was really fun playing with the seniors at a home game with a big crowd,” Allie Peery (’15) said.

The game started off fast for the Vikings as Peery scored the first goal within the first three minutes of the half. The next goal was then scored about five minutes later by the Wildcats as they tied the score up at 1-1. Kristen Destefano (’14) followed up within 15 seconds of the Wildcats’ goal to bring the lead back to the Vikings.

After another Vikings’ goal that brought the score to 3-1, Los Gatos scored but was quickly followed up with two Paly goals including one by Paige Bara (’15) to bring the score to 5-2. The Wildcats saw their last goal of the half with 8:15 left in the half, and the Vikings spent the last eight minutes scoring to bring their lead to 11-3 at the end of the half.

Peery contributed to the Vikings’ lead with four goals in the half.

“We came out strong and we had a very strong first half,” Peery said. “In the second half we worked on more technical things instead of just trying to get a big lead.”

The second half began with two Paly goals, including a fast shot by Peery. The Paly goals were followed by three Los Gatos goals as the Wildcats picked up speed closing the gap 13-6. The Vikings fought back however bringing in two goals with one scored by Sama Rao (’14) before Los Gatos scored its last point of the game in the last three minutes of the game.Ami Drez (’14) finished off the game with the last point for the Vikings with 1:15 left in the game bringing the end score to 16-8.

The Lady Vikes were pleased with their performance and enjoyed their victory on senior night.

“I think it was really fun and we all had a really good attitude, nothing got us down, we were just really happy to play together,” Destefano said. “I’ve played here for four years, so [my senior night] is a big moment.”

Girls’ lacrosse will play next against Pioneer High School at home on Monday.