The Viking Magazine • May 13, 2014 • https://vikingsportsmag.com/spring-sports/2014/05/13/brief-vikings-softball-complete-the-comeback-against-fremont-on-senior-night-8-3/ 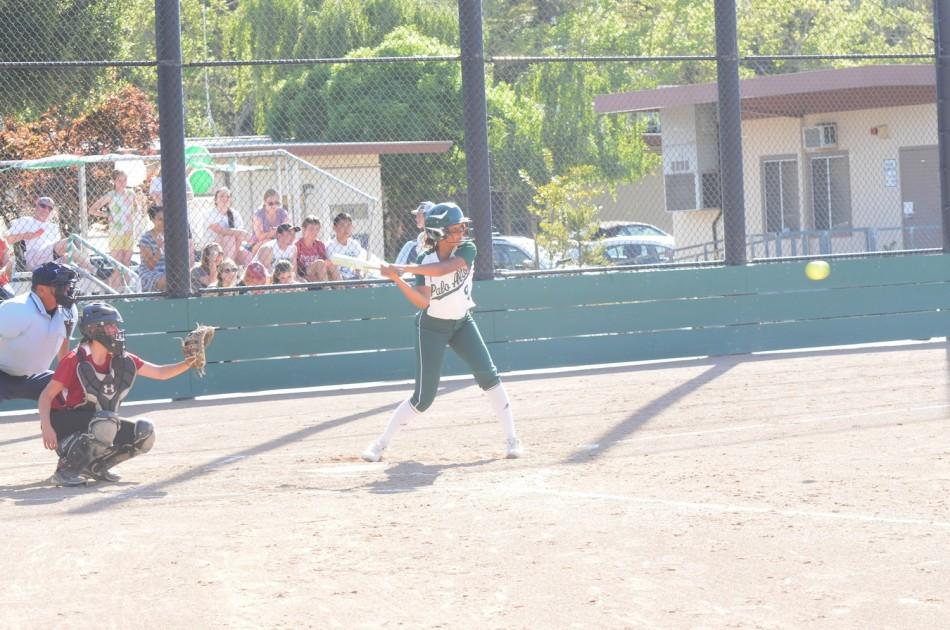 Kabria Dame ('15) swings at a pitch. The Vikings would go on to win 8-3 against Fremont

The Palo Alto Vikings Varsity Softball team completed a comeback late Tuesday afternoon against Fremont, 8-3. It was the sendoff that the Seniors believed that they deserved on Senior Night and an important victory given that they had lost to Fremont earlier in the season.

“We just wanted to win,” Tori DeStefano (’14) said. “We were all really into it and it really registered in the last couple of innings that it was our last game.”

The Vikings started the comeback in the third inning with Fremont up 2-1. With DeStefano on third and Autumn Macareno (’15) on first, Casey Glassford (’15) hit a triple that knocked both Vikings on base. Maddie Martinson (’16) then hit a single that knocked in Glassford.

Glassford believed that the comeback was helped by the never-say-die mentality that Coach Bill Laskey has instilled in the team this year.

“Last year we had a lot of game where we got down within the first couple innings,” Glassford said. “But the biggest thing that this new coaching staff has tried to install in us is this fighting-back attitude so to do it on Senior Night is pretty special.”

“It means a lot to the players,” Laskey said. “This is their final game as a high school athlete, on their high school field. I’m just so glad that they put it together and won the game.”

The Vikings’ final regular season game is at Gunn on Thursday at 4:00 P.M.