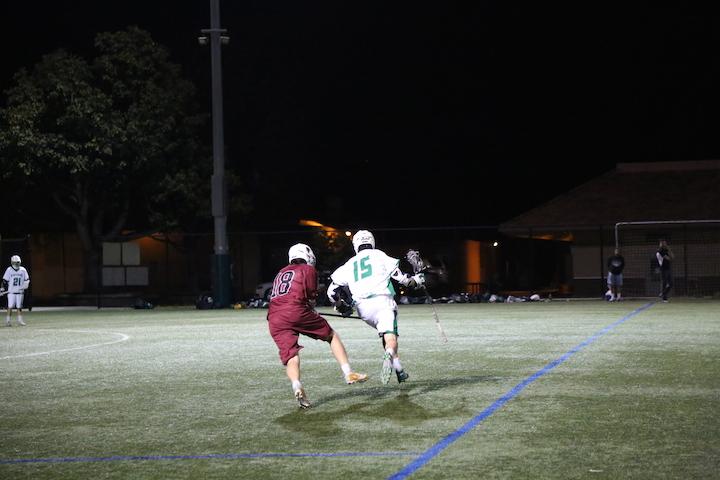 The Palo Alto High School Boys Lacrosse team played Sacred Heart Preparatory (SHP) underneath the floodlights Thursday night. The Vikings came into the game looking to build upon their first league win of the season against Archbishop Mitty in the inaugural match of the 2015 season. But, despite the effort, the Viking’s lost to the Gators, 6-12.

Paly started the game on the front foot, winning the face off. This resulted in Matt Seligson (’16) scoring the opening goal of the game with 10 minutes left in the first quarter. In the preceding series of plays, Quintin Valenti (’16) made a series of saves to keep the Gators from leveling the shoreline. This helped to get Paly on the break, and this lead to Owen Staiger (’15) scoring the second goal of the game.

The Viking’s style of play was to draw the Gators out of the crease in order to create space for their attacking players. SHP scored their first goal of the game with 5 minutes left in the first quarter. Seligson seemed to be involved with every play on the field, even stealing the ball from a Gator inside the SHP half of the field. Staiger got his second goal of the game, a well-placed shot in the bottom left hand of the goal giving the Vikings the 3-1 lead with 2 minutes left in the 1st. Captain Zach Levitan (’15) added to the Vikings’ increasing lead with a minute to a go, making it 4-1 before SHP added another before the quarter ended to make it 4-2 at the break.

After the break, SHP struck first, coming within a single goal to tying the Vikings. As the quarter wore on, SHP began to press more and more. At the nine minute mark, SHP added to their tally and tied the game, 4-4. The quarter belong to SHP, and they added another quickly after tying the score line to make the score 4-5. This lead to a quick succession of Gator goals to increase their lead to 4-7. Towards the end of the quarter, Paly began to drag themselves back into the game. Piling the pressure on, a succession of shots went just wide of their target. In response to this, SHP stepped up their physicality, checking a number of paly players.

After halftime, the Vikings began to press even more. Levitan and Seligson continued to make cutting runs into the SHP crease but the Gators responded with their own, needing Valenti to save them from conceding again. But, SHP scored again, adding to their lead twice to make the score 4-9. Staiger responded with a goal of his own to earn his hat trick and to get the Vikings back in the game. The Gators scored on the resulting face off, which made the score 5-10.SHP scored the first goal of the 4th quarter, but Seligson responded with a goal of his own to take the score to 6-11. SHP scored on the final play and won the game 6-12.

Coach DJ Shelton believed that the game was a learning experience for the team.

“It’s why you play all of your non-conference games at the beginning of the season, they are learning opportunities,” Shelton said. “Obviously it’s no fun losing, but you learn more from losing than winning. Opportunities like this give coaches the chance to see where the holes are and what we need to work on in practice.”

Staiger believes that the team is looking forward to the next game after the loss.

“We’re just looking at each game as if it is the most important, Staiger said. “I think that will be the key in league play.”

The Vikings’ next game will be at Menlo-Atherton this Saturday at 5:00 P.M.