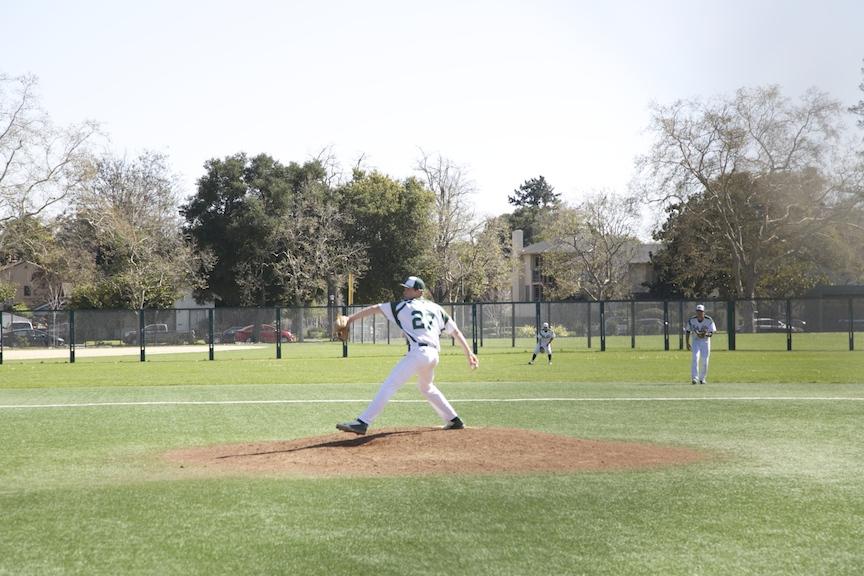 Despite five strong innings from Justin Hull (‘16) in his first outing of the year, Paly baseball fell to the Carlmont Scots 5-4 this Saturday afternoon.

Hull allowed no earned runs and struck out six batters in the loss.

“We played well,” first baseman Lawrence Han (‘16) said. “We did everything right, there were just a few errors and mental mistakes that gave them the advantage eventually.”

Carlmont took an early 1-0 lead in the top of the first inning after scoring on a passed ball. Despite the immediate scoring, pitchers on both teams found to find a groove and neither one allowed another run until the fourth inning.

In the bottom of the fourth inning, Alec Olmstead (‘16) doubled to left center and was moved over to third base on Will Snodgrass’ (‘15) sacrifice bunt. After Max Jung-Goldberg (‘18) walked, Jack Andrews (‘15) hit a sacrifice fly to bring Olmstead home, evening the score at 1-1.

The Vikings scored again in the bottom of the fifth to take a 2-1 lead on a single by Hull, but Carlmont retaliated with two runs in the top of the sixth. With Corey Bicknell (‘15) pitching, the Scots turned three singles, two groundouts and a wild pitch into two runs, regaining the lead at 3-2.

Paly, however, came back strong in the bottom of the sixth. Owen Plambeck (‘16) hit a double with runners on first and third to score two, giving the Vikings the lead once more. Carlmont scored once in the top of the seventh, tieing the game at four.

The bottom of the seventh started off well as Hull and Olmstead both singled, putting two runners on base with no outs. But three straight Vikings could not bring the winning run home, and the game went to extra innings.

In the top of the eighth, two straight errors and sacrifice fly gave Carlmont the lead at 5-4. The Vikings could not muster any offense in the bottom half of the inning and suffered their first loss of the year.

“We battled really well near the end,” Plambeck (‘16) said. “Save a couple costly mistakes throughout the game, we had a pretty good chance to win but we kind of shot ourselves in the foot.”

The team plays next in its league opener against Mountain View at home on Wednesday afternoon.