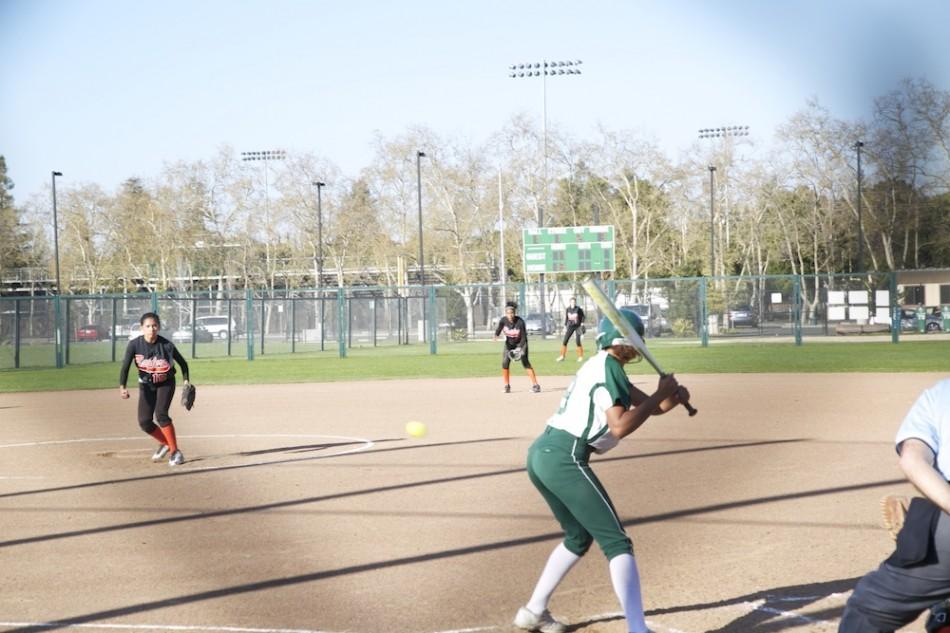 With the Vikings ahead 13-1 in the bottom of the third, Kabria Dame ('15) swings and makes contact. The game would end with the same score.

In its fifth game of the season, softball lit up the field on Monday afternoon.

Silver Creek came out strong with a lead-off double in the first inning. Natalie Snyder (’16) caught a ball in deep left field for a fly out, however second double to put Silver Head ahead 1-0. The Vikings wouldn’t let them score another run, though, getting a player out on an attempted steal and then at first.

The Vikings went up to bat, and Kabria Dame (’15) and Maddie Martinson (’16) drew successive walks. Mackenzie Glassford (’17) hit a ball to deep left field and Dame ran in to score. Casey Glassford (’15) loaded the bases with a hit to left field. The Vikings capitalized on their situation and made two more runs to take the 3-1 lead.

No runs were scored in the second inning. The Vikings increased their lead substantially in the bottom of the third. C. Glassford led off with a double, and stole third. With her and Autumn Macreno (’15) on base, Maddy Jones (’15) hit long to center field and the lead was increased 4-1. From there, the Vikings had a string of hits to get to 7-1. With two on, Martinson hit a fly ball to left field but both runners tagged up to score two runs. Paly still had more for Silver Creek, and ended the inning with a 13-1 lead.

The Vikings’ lead was threatened at the top of the fourth when Silver Creek led off with a double, but the Vikings made important plays to prevent any runs from being scored.

Macreno commended her team’s defensive efforts in the game.

“Usually we make errors and we didn’t make any errors so that was good,” Macreno said. “[Silver Creek] got hits that they deserved, but they didn’t get any hits they didn’t [deserve].”

Paly didn’t score at their at time at bat, and Silver Creek wasn’t able to make anything of the top of the fifth.

Pitcher M. Glassford notes that despite the success Paly had offensively, the team can always do better.

“I think we could probably use just a little tightening up defensively and offensively; just knowing what pitches to swing at and what ones to let go,” M. Glassford said.

Paly plays next tomorrow at home at 4 p.m.