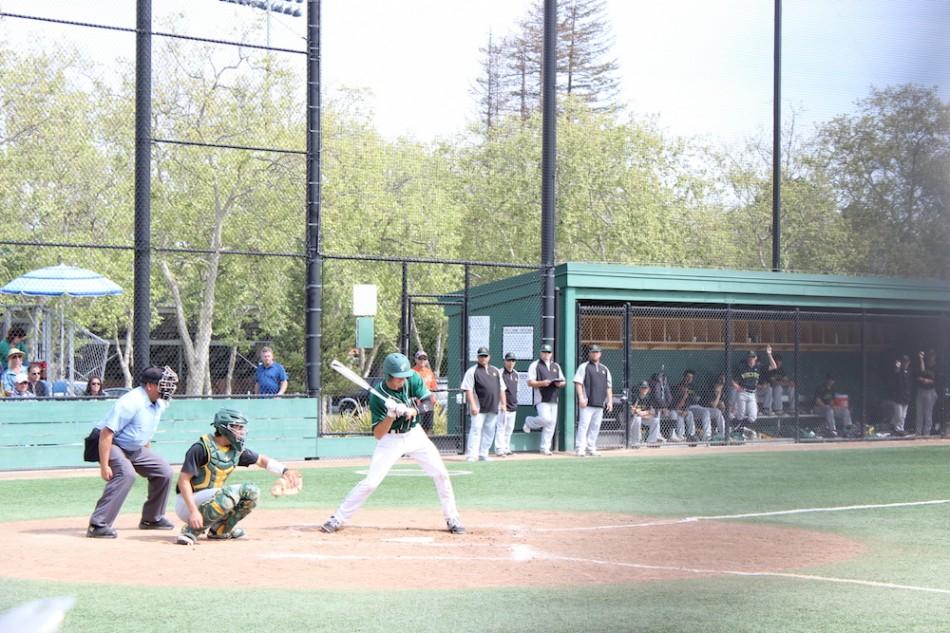 Ryan Chang ('17) looks to hit in his game against San Ramon Valley on Saturday. The Vikings went on to lose 3-0.

The game started off with the Vikings on defense and Justin Hull (’16) on the mound. After walking the first three batters, the bases were loaded and the Wolves first batter stole home on a wild pitch.

The team made it out of the inning only letting up one more run on a fly ball to the outfield. Paly then stepped up to the plate with a 2-0 deficit. The inning ended with only Owen Plambeck (’16) getting on base off of a walk.

Hull slowed down San Ramon’s offensive momentum with a strikeout and Phil Lewis (‘15) then caught a fly ball, which was followed by catcher Lawrence Han (’16) ending the inning with a caught pop-fly by the plate.

The second inning was slow for the Vikings as well, with no hits. The only player to make it on base was Han, who was walked.

In the third, San Ramon Valley hit a fly out to first, followed by a strikeout. The Wolves got on base with a walk, but the final batter bunt which Hull fielded and quickly threw to first.

The bottom of the inning was no more successful being that Paly was also kept scoreless, with Riley Schoeben (’16) striking out, Phil Lewis (’15) hitting a fly ball caught in left field, and Ben Cleasby (’17) getting thrown out at first.

The Vikings entered the top of the fourth still down 2-0, but held the Wolves with a another strikeout by Hull, and then the next two outs were courtesy of plays made my Lewis in centerfield, one fly ball and one thrown in to get a runner out at second.

“We were really able to stay in there the whole game,” Hull said. “They were a really good team but we competed.”

Plambeck started off the bottom of the inning for the Vikings by striking out, and was then followed by Hull who walked. Alec Olmstead (’16) then stepped up to the plate and struck out, but advanced Hull who stole second on the final pitch. Jack Andrews (’15) then ended the inning by striking out swinging.

Hull remained on the mound going into the fifth and walked the first batter, who was then thrown out by Han when he attempted to steal second. Han then got another out after the runner ran on a dropped third strike and the ball was thrown to first.

Han was thrown out at first to start the fifth for the Vikings. Chang and Schoeben struck out to end the inning.

“We ran into a really good pitcher on the other side,” Coach Pete Fukuhara said. “He was throwing three pitches for a strike and he was just tough to hit.”

The Wolves started the sixth with a single, but the next batter hit a fly ball to center field for the first out. The following batter was walked, but a flyout to right field and a ground out at first ended the top of the sixth.

Lewis was first up for the Vikings and hit a fly ball to center that was caught. Cleasby was next but struck out. Plambeck was thrown out at first for the third out.

The Wolves came into the top of the seventh still leading 3-0, but the Vikings stayed solid and threw out the first two batters at first. The next batters were walked, but none scored thanks to Plambeck who caught a fly ball in right field.

The Vikings last at bat was started off by Hull who flew out to right field, then Olmstead stepped up and struck out in six pitches, and the game was ended by Andrews who grounded out.

Despite the score, Han thought that his team performed well, crediting San Ramon’s success to their pitcher.

“We did everything we had to do except for hit because their pitcher…we just couldn’t find a way to hit him,” Han said. “He just did his job.”

Han believes that the Vikings will do well in league games, as long as they do not face teams with pitchers of the same caliber as that of San Ramon.

“Right now we’re looking good,” Han said. “Going into league, not many people can throw like that so we’re pretty confident, [but] we have to improve if we’re going to face another one of those guys.”

The final score was 3-0 and the Vikings walked away prepared to face Wilcox on Wednesday at 4:00 p.m. at Paly.