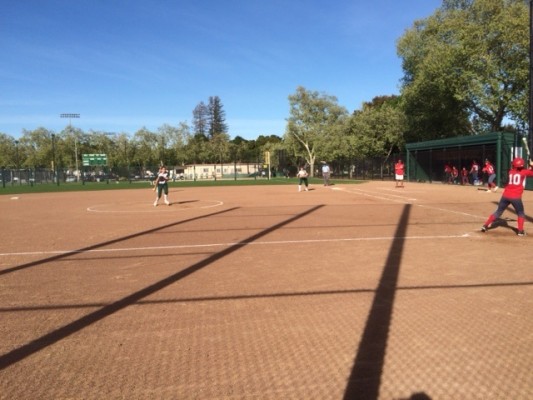 The Palo Alto Vikings softball team crushed the El Camino Colts on Monday afternoon, beating them by a score of 11 to 1.

The non-conference game started at 4 p.m. on home turf and Paly got off to a quick start. In the first inning, Paly began with a 2 run lead and shut out their opponents with no hits allowed. Strong defense and a fast paced offense helped the Vikings get an early lead against their opponent.

Paly advanced it’s lead in the second inning after a double by Autumn Macareno (`15) and a single by Kabria Dame (`15), making the score 5 to nothing.  Pitcher Mackenzie Glassford (’17) continued to throw strikes and the Vikings defense remained persistent in their game.

During the third inning, the Vikings started to slow down. El Camino managed to bat a run in, making the score 5-1, and Paly didn’t build on their lead at bat.. This was however only a minor chip in Paly’s momentum and did not seem to slow down the Vikings at all.

After shutting out El Camino once again in the 4th inning, Palo Alto prepared to bat once more. A missed catch by the opposition allowed Paly to get two more runs in, adding to their already impressive lead. The score remained 7-1 for a while, until another double, making the score 9-1.

Paly’s defense shut out El Camino yet again in the top of the 5th inning and just minutes later, Dame hit a double sending two more of her teammates in, finishing the game 11-1.

With Palo Alto up by 10, the mercy rule was put into effect, and the game ended in the 5th inning with a final score of 11 to 1. The Palo Alto Vikings came out with a stunning victory, adding to their hopes of a promising season.

Next up for the Vikings is Sacred Heart Cathedral on Tuesday, March 24th.