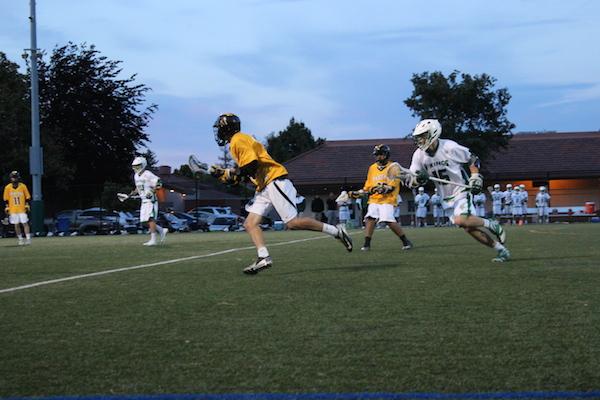 The game started off slow for the Vikings with one Paly goal by Zach Levitan (’15), assisted by Matt Seligson (’16) to match Mountain View’s three goals in the first period.

Heading into the second period, trailing 3-1, the Vikings tied it up following goals from Cole Tierney (’16), Ariya Momeny (’16). Tierney followed up with another goal to give Paly the lead, 4-3. The Spartans countered with two goals before the end of the first half, to give them the lead 5-4 at the end of the second.

In the third period, Mountain View put up two more goals, but the Vikings fought back hard with a goal from Owen Staiger (’15) to bring the score to 7-5, Paly trailing. Seligson followed with another goal to close the gap, but Mountain View maintained their lead with another point to make the Spartans’ lead 8-6. Tierney had the final goal of the period for the Vikings to leave the Spartans in the lead 8-7 at the end of the third.

Despite trailing for the majority of the first three quarters, the Vikings found their momentum in the final quarter.

“We started off pretty weak and got a little worried, we didn’t come out nearly as hard as we should have, but we picked it up at the end” Tierney said.

In the final quarter, the defense was stiff on both sides. However, Hayden Libbey (’17) tied it up 8-8 with just six minutes left in the game. Seligson had the big game-winning goal to put the Vikings back up 9-8 with 2:34 left on the clock. Finally securing the lead once again, the Vikings managed to run out the clock and secure their win in the last few minutes.

The Vikings’ win will send them to the SCVAL finals against the Los Gatos Wildcats on Saturday, May 16 at 2 p.m. at Los Gatos High School.