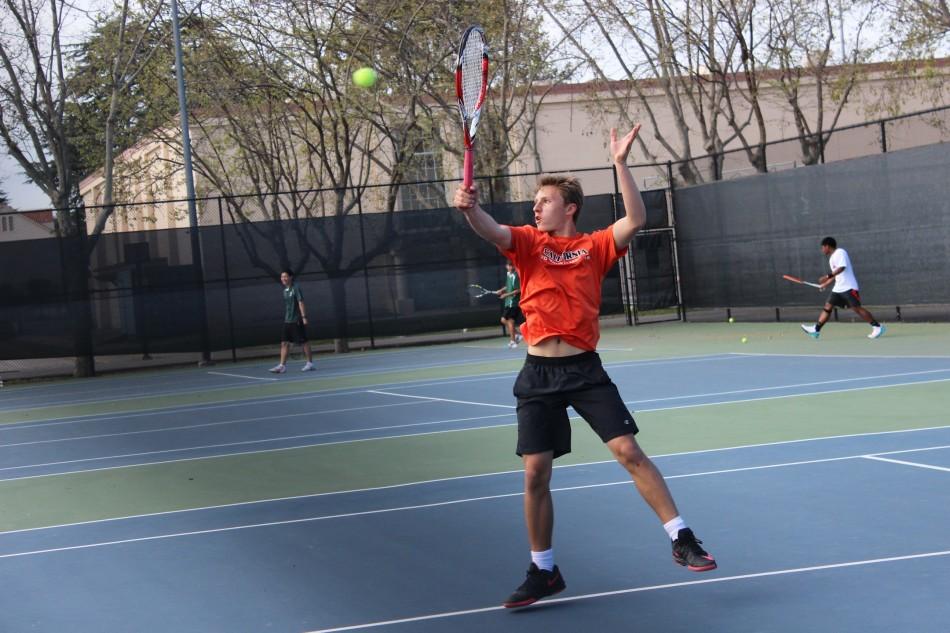 Carl GoodFriend ('16) jumps up to serve the ball. Paly ended up winning the match against Aragon High School.

The Palo Alto boys’ tennis team started the year off on a high note with a definitive 6-1 victory over non-league opponent Aragon High School.

The team started off very strong with all three doubles teams getting quick wins in impressive fashion. The freshman duo of Antony Georgiatis (‘19) and Adam Love (‘19) took away a 6-2, 6-3 win with excellent play coming from both ends of the freshman team. Jerry Hong (‘17) and Dylan Polley (‘17) grueled out a well deserved victory against a competitive Aragon duo, winning 7-5, 7-5. And finally the combo of Hunter North (‘18) and Kevin Chen (‘17) came out the gates hot with a breeze of a first set winning 6-0, then faced some challenges in the second which they would overcome, winning the second set 7-6.

Carl Goodfriend (16’) stepped up with the absence of number one singles player Shiv Matta (16’) out with a concussion, taking care of business winning 6-1, 6-4 against a solid Aragon opponent.

A big momentum swinger for the Vikings was the come from behind win from Henry Badger (‘17).  Badger came back from a deficit in both sets ending up winning 6-4, 6-4. A big contributor to Badger’s success was his consistency of his serves, allowing him to constantly be on the attack.

The one loss of the day came from Noah Galper (17’), who played an excellent opponent from the Dons. When asked what might have been some of the reasons for the loss galper responded with,

“It was the first match of the year so I had some nerves, my opponent was good but I should have played better.”

But with the win sealed, Galper has moved on to their next matchup against cross town rivals, Gunn, who they will be taking on tomorrow.

“We lost pretty badly both times last year” Galper said, “but they are a weaker team this year and we have more experience.”

With a great start to the year, the team is hoping to keep the momentum going into the big rivalry matchup tomorrow against Gunn. Shiv Matta will still be out with a head injury but watch out for names like Carl Goodfriend and Noah Galper to take on the load and carry the Vikings to victory.