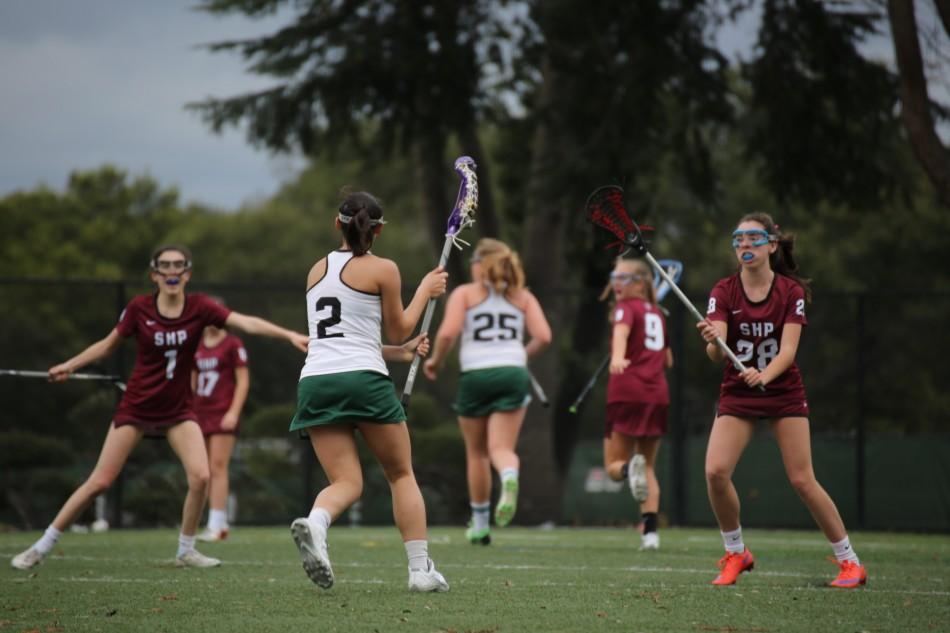 The Paly girls’ lacrosse team fell to Sacred Heart Prep by the score of 16-10 on Saturday.

The Vikings started out the game strong as they won the opening faceoff and went right down the field and scored. Charlotte Cheng (‘18) had the opening goal.

Despite Paly’s quick start, Sacred Heart responded by scoring four straight, unanswered goals to give themselves a 4-1 lead early in the first half.

After the Vikings got a goal back, Sacred Heart once again responded with a couple goals of their own and about half way through the half were leading 6-2.

The rest of the first half would follow a similar trend. Maya Benatar (‘16) brought the score to 6-3, but Sacred Heart then scored three straight goals to give themselves a six goal lead by the score of 9-3.

“I definitely think that when we play teams with players committed to schools we’re not any worse than them skill wise, but just mentally we aren’t as confident. We need to work on going into every game with confidence because we do have the players to beat really good teams,” Benatar said.

Each team scored two more goals before the end of the half and Sacred Heart went into the break holding a 11-5 lead.

Sacred Heart came out and started the second half strong, scoring two quick goals to widen their lead.

The Vikings responded with three goals of their own from three different players, including a second goal of the game from Cheng.

As the Vikings appeared set to make a comeback, Sacred Heart responded once again, this time with three straight goals for themselves.

Paly would grab two late goals, but it wasn’t enough as the fell by the final score of 16-10.

“I think we need to work on maintaining possession on attack and being confident. And on defense we just need to talk and be aware of where everyone is on the field,” Reid Walters (‘16) said looking forward beyond this game.

The Vikings will look to bounce back when they play Los Gatos on Wednesday night at Paly.