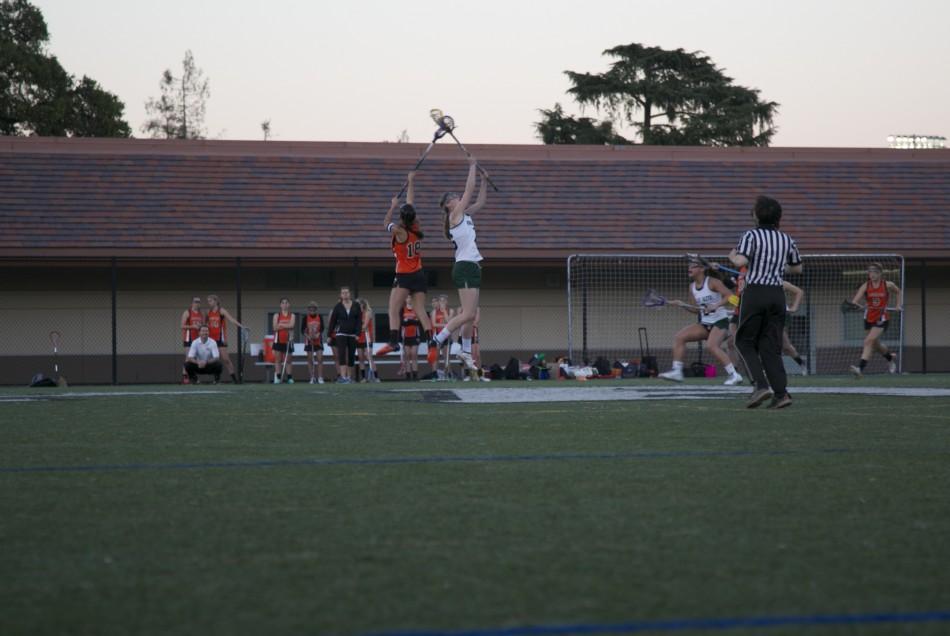 The girls’ lacrosse team kicked off league play with a 16-8 victory over Los Gatos Wednesday night at home. With sharp passing and intense offense the girls

The wildcats may have won the opening draw, but Paly quickly stole the ball back and Ellen Goncher (‘18) went on to score the first goal of the game. The viking’s didn’t let up there as Maya Benatar (‘16) won the next draw and traveled quickly downfield to score without interruption and followed it with another goal making the score 3-0.

“I think we had a great win and did well making good passes, connections, and shots,” Benatar said. “I think we set the tone going into league and are looking to stay undefeated.”

Early on Meredith Kinnaman (‘16) had two saves in a row to keep the wildcats scoreless. But, off a blocked penalty shot, Los Gatos got the rebound and put it back in to score its first goal of the night. Kinnaman went on to have over eight saves for the vikings.

Holly Tumminaro (‘16) scored again making the score 4-1, but the wildcats had fire in their eyes. With roughly five minutes left in the half Los Gatos scored two quick goals, but the vikings fought back with its own two goals making the score 6-2.

With under a minute left Los Gatos had brought the score within one, but the vikings were not letting up that easy. With 53 seconds left, Paly scored three times to the wildcats lone goal to settle to a halftime score of 9-6.

“We’re hoping to improve our high pressure defense and executing plays on attack,” Benatar said. “Also, we set a goal to only allow the other team 12 shots and 8 goals per game and although we only let in 8, goals we allowed 20 shots, so we want to bring that down.”

The vikings started the second half even stronger than the first. Goncher scored quickly followed by two more Paly goals to give the team a six goal lead. The teams battled back and forth offensively, but they went without a goal until Anna Seligson (‘18)  broke up the middle which preceded another viking’s goal.

“When the other team started catching up we shut them down quick,” Mikayla Spaizman (‘16) said. “We have a lot of strong players and we’re always looking to improve.”

It wasn’t until just under nine minutes left of play that Los Gatos got their first goal of the second half. With another save from Meredith and great team passes, Paly scored its final goal of the night. The wildcats attempted to answer back with another goal, but the game was already over giving the vikings a 16-8 victory.