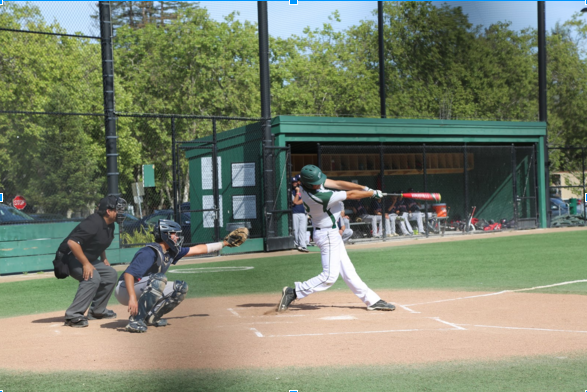 Neither team scored in the first inning. However, in the second inning, Justin Hull (’16) was walked and was able to steal second base when Lawrence Han (‘16) got up to bat. Han hit a single down center field, giving Hull the opportunity to run home. Another run was made when Riley Schoeben (’16) was on second base as Angus Stayte (‘17) hit a double to left field. Ben Cleasby (‘17) was also able to hit a double to far right field, bringing in a run from Stayte. To finish the inning, Ethan Stern (‘17) hit a single to right field, letting Cleasby run home and add another point for the Vikings. The second inning ended with a score of 4-0.

In the top of the third inning, Saratoga hit a single and was walked by Hull, putting a man on first and second. Saratoga then hit a line drive to left field, bringing in a run which increased the score to 4-1. Hull then threw two strikeouts in a row, bringing them to the bottom of the inning. Alec Olmstead (‘16) and Hull were both able to hit singles. Olmstead then ran home after another single from Han. Hull was able to run home after an error was made by the third baseman. Schoeben hit a groundball to shortstop, bringing home Han to end the inning with a score of 7-1.

It wasn’t until the bottom of the fifth inning for another run to be made. Olmstead, Han and Schoeben were able to fill the bases. Albert Han (‘16) hit a single towards third, letting Olmstead add another run to the score. Stayte hit a sacrifice fly, bringing home L. Han and putting Schoeben on third. Cleasby’s fly ball to center field was caught, ending the inning with a score of 9-1.

In the top of the sixth, Schoeben replaced Hull as pitcher and only allowed Saratoga to hit one single during the inning. In the bottom of the inning, Stern hit a single to right field and advanced to second after Max Jung-Goldberg’s (‘16) grounded out. Stern then proceeded to third after Olmstead’s line drive to left field. Hull hit the last single of the game towards left field, bringing in Stern to finalize the score to 10-1. Schoeben prevented Saratoga from scoring any runs in the top of the seventh inning.

“The boys came out with great energy and they played unselfish baseball and they did things right today.”

They will play Saratoga again on Friday at 4pm, but this time at Saratoga High School.