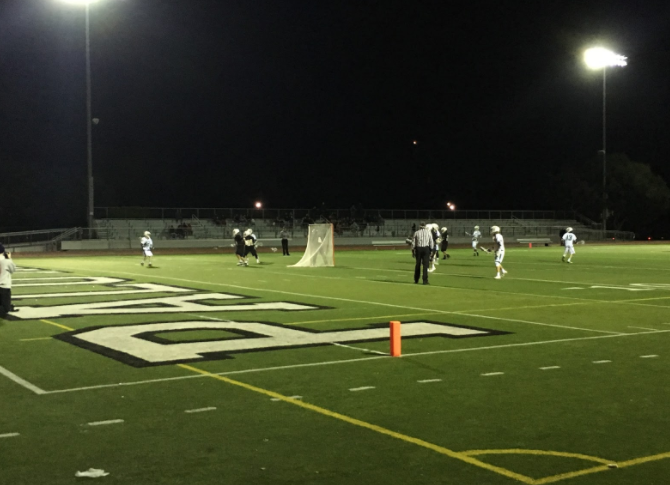 Paly boys’ Lacrosse started the season off with a strong performance by defeating Archbishop Mitty in the home opener on Friday night.

This game was played in memorial of former lacrosse assistant coach Colin O’Kane and will continue to be an annual event between these two teams to honor the former player and coach. After a nice ceremony to honor O’Kane before the game both teams headed out to the field and the game began.

Paly responded a minute later with a goal from Patrick McIntosh (‘19) after great build up play from defense making the score 2-1. The Vikes continued to gain momentum with another goal from McIntosh after great move from behind the goal as the first quarter came to an end with a score of 2-2.

McIntosh continued his hot start with yet another goal early in the second quarter after shaking free of a Mitty defender and finding the back of the net. Mitty responded three minutes later to tie the game at three goals each. However, McIntosh continued his dominance over the Mitty defense by giving Paly the lead again a minute later. The Vikings began to pull away by adding three more goals in only a minute from Louie Marzano (‘17), Hayden Libbey (‘17), and another goal from McIntosh to make the score 7-3. Mitty quickly responded with another goal but Paly quickly added two goals to make the score 9-4 at halftime.

Paly continued to trade goals with Archbishop Mitty during the fourth quarter but held on to defeat Mitty 15-10.

“We played really well for a first game last night, we came out a little slow and rusty, but after we settled in we played a great game of team lacrosse,” said Benner Mullin (‘18). “We definitely don’t have the individual talent the team had last year, but we all play together really well and I hope we can win the championship this year.”

The Vikings will play their next game against Menlo-Atherton on Thursday, March 2nd.