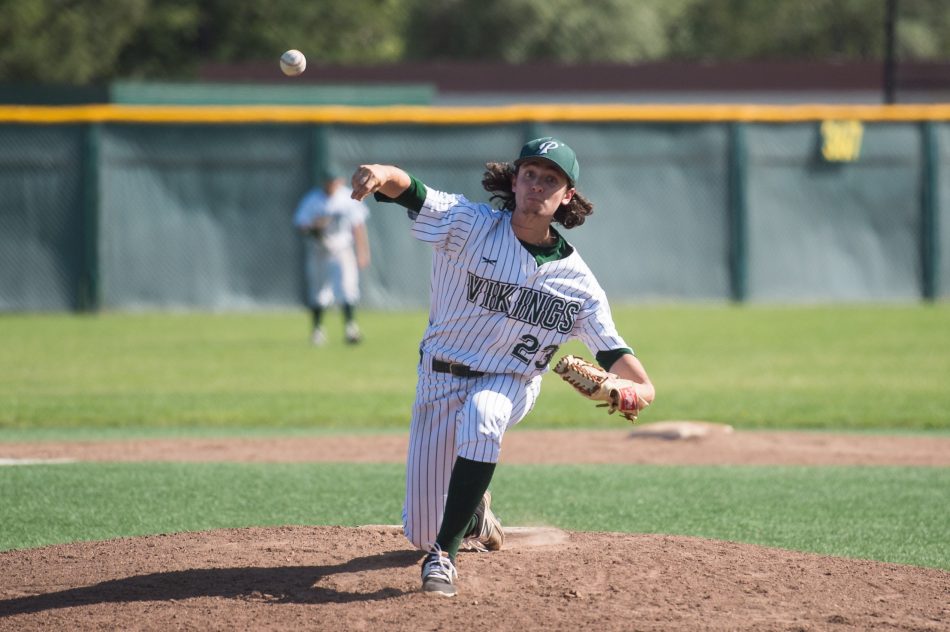 The Vikings got on the board early. Max Jung-Goldberg (‘18) tripled to lead off the bottom of the first and Ben Cleasby (‘17) singled him home to take a 1-0 lead.

Ecoff, meanwhile, was dealing. Ecoff allowed just three base runners in first four inning and kept the lead at 1-0.

“Early in the game I struggled getting ahead in the count,” Ecoff said. “As the game went on, I got more of a feel for my other pitches and was able to close it out.”

The Vikings tacked on another run in the bottom of the fourth. After Nathan Willis (‘18) led off the inning with a double, Josh Kasevich (‘19) singles him in to extend the lead to 2-0.

As it turned out, two runs was enough for Ecoff on the mound. Ecoff finished his complete game giving up just one run and only four hits. Paly went on to win 3-1.

The win for the Vikings clinched the league title with two league games left to go. Paly has been dominant in league this year, losing their only league game of the season earlier this week to Mountain View. The road doesn’t stop here for the Vikings though; the team has high goals in the league and CCS tournaments as well.

“For the rest of the year, we need to focus on execution within our team and the little things that can win us ball games against better teams,” Ecoff said. “We hope to advance to finals in CCS and win it all.”

“A regular season title is great and we’re proud that we were able to clinch it early,” Michael Champagne said. “However, it is just the first of our many goals. Now we have to take care of business in the league tournament so we can be the undisputed champions of the De Anza Division and then we have to move on to CCS and get ourselves to Municipal Stadium for the CCS Final.”

Baseball plays their next game against non league opponent Carlmont at noon on Saturday.