Rojahn, Casey dominate on the mound as Baseball wins 3-1 over Homestead – The Viking Magazine

Rojahn, Casey dominate on the mound as Baseball wins 3-1 over Homestead 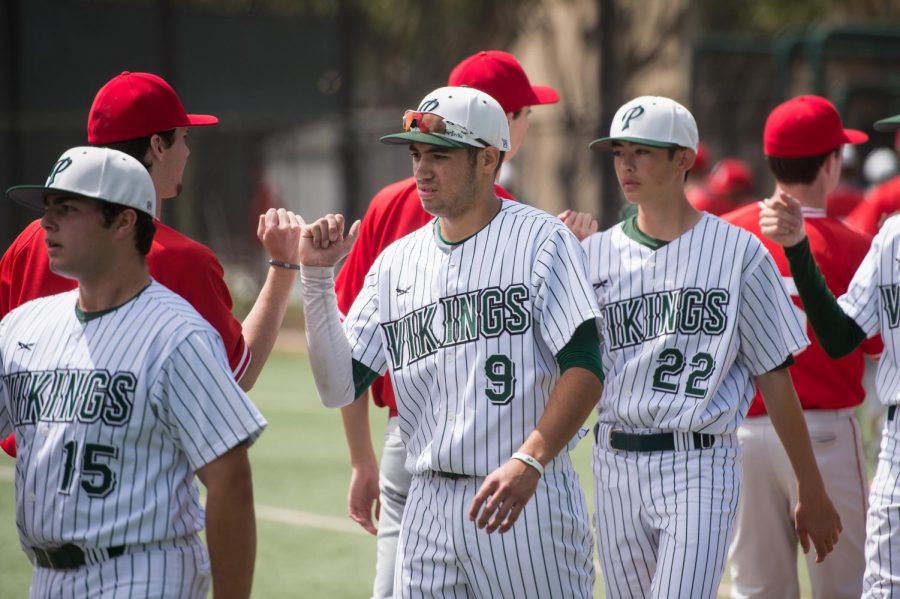 In a tight pitchers duel, Baseball topped Homestead 3-1 behind a three-run bottom of the sixth to comeback and win.

With ace Spencer Rojahn (‘18) on the mound, the Vikings had to feel confident coming into the contest especially after beating Homestead 11-5 on Wednesday. Rojahn also hadn’t given up a run this season until Friday’s game.

Homestead broke up Rojahn’s shutout season with a single and a double down the left field line in the top of the second to take a 1-0. That would be the only run he gave up in his five innings of work on the day.

“[Spencer’s] curveball was working all day,” Nathan Willis (‘18) said. “He can spot that thing on the outside corner, freeze the hitters. He just did a great job.”

With how Paly hit on Wednesday this shouldn’t have felt concerning, but it was quickly obvious that Homestead’s starter would give the Vikings a scare. Through five innings Homestead still lead 1-0 and Paly had just one hit and few baserunners.

In the top of the sixth, sophomore phenom Dean Casey (‘20) came on in relief of Rojahn. Casey has been a revelation for the Vikings since being called up from JV, impressing with his command and composure at such a young age. He sat down the Mustangs 1, 2, 3 in the sixth.

“Tip my cap to the pitcher, that guy was doing a great job all day,” Willis said. “Keeping us off balance, hitting his spots… but, Niko ended the fifth with a great play and we knew we had some momentum going into the at bats and we took advantage of it.”

Casey remained in the game to close the door on Homestead and he did so quickly and efficiently, again three up three down. He finished the game with two innings pitched, two strikeouts and no baserunners.

“Dean’s a savage,” Willis said. “Dean came in in the sixth inning and absolutely shut the door on these guys. They had not chance. Dean painted every single pitch he threw. I can’t say enough about Dean. That guy is an animal.”

Rojahn, Casey dominate on the mound as Baseball wins 3-1 over Homestead